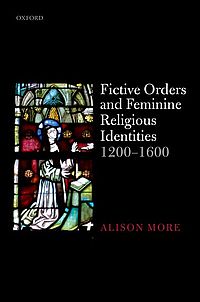 The past two decades have witnessed an ever growing interest in the lives, writings and experiences of pre-modern devout women. Interdisciplinary approaches have greatly illuminated on the complexity and richness of the histories of these women which for too long remained obscured in scholarship. Scholars have challenged certain narratives that present medieval women mostly as passive receivers of religious ideals set by male ecclesiastical authority and have instead stressed the social and theological contributions they made to their worlds. Among the most studied religious women have been nuns, female branches of the mendicant Orders and those communities which were perceived as neither in nor out of the secular world - beguines, penitents, and tertiaries.

Alison More's Fictive Orders is an important addition to the history of pre-modern religious women, as it brings a new perspective on those communities that occupied a 'liminal space' in the religious landscape of the later Middle Ages. She aims to reassess the religious identities of those women who did not live by a religious rule - the 'quasi-religious', 'irregular' or 'extra-regular' communities - in order to demonstrate that their identities and agencies were far less coherent and far more diverse than often accounted for. To do so, she departs from the usual tendency to concentrate on specific female communities in isolation. She is interested in the bigger picture and has a bigger story to tell about various female groups that sought to lead a life in which the active and the contemplative were never mutually exclusive. More's investigation extends beyond conventional timeframes as she follows these groups into the sixteenth century. Furthermore, More not only engages with a variety of primary sources, many still in manuscript (papal bulls, mendicant Order histories, hagiography, sermons, liturgy, devotional writings), and with the literature in her field. She also draws on theoretical discussions about identity in order to revisit current 'understandings of historical gender' (2).

As she rightly points out in her 'Introduction', a discussion of 'religious identities' needs to be placed within medieval understandings of secular/lay and religion/religious distinction as a strictly legal one. The distinction is relevant since it conferred a legal status to female individuals and groups in the Middle Ages rather than referring to modes of living and experiencing religion, as usually employed.

More deploys her argument in six chapters that follow the history of these women from the 13th through the 16th centuries throughout Western Europe and the successive attempts of ecclesiastical authorities and religious leaders to 'regularize' and 'institutionalize' and thus confer them a clear religious identity.

The first three chapters function as a historical introduction to the main subject of the book - the creation of 'fictive orders' and normative 'feminine religious identities'. From their appearance in thirteenth-century urban milieus, groups of devout lay women whose way of life was distinct from that of enclosed nuns were variably met with suspicion, unease and support by those in charge with their pastoral care. Chapter 1 deals with the beginnings of the often tense relationship between 'irregular' women and religious authorities and narrates the first attempts to regularize these communities and give them a canonical status, which culminated with the issuing of the bull Supra montem in 1286. Although the bull sought to regularize their situation by encouraging women to adopt a recognized rule and visible signs of identification, such as a habit, liturgy, its implementation only affected Franciscan tertiaries since many communities remained non-attached or loosely affiliated with a particular Order. Beguines, in particular, who were under constant suspicion of heresy were subject of regulations of the Council of Vienne in the early fourteenth century (Chapter 2). Yet, the stricter rules these women were to follow still did not bring the kind of unity and order the Church sought to impose since many continued to remain outside male religious authority.

Further attempts to bring female communities under the rule of established orders (Franciscan, Dominican, Augustinian) are explored in Chapter 3, which deals with the developments during the changing spiritual climate of the later fourteenth-early fifteenth centuries. The emergence of reformist movements within mendicant Orders significantly impacted on female communities, as Observants developed a 'more systematic program of identity creation' (66) for 'extra regular' female communities. This program involved various strategies of memory creation and the appropriation of certain female characters as precursors of enclosed communities, such as Catherine of Sienna. The result was the creation of female religious 'fictive orders' with a shared history and identity.

Identity creation and identification are further addressed in Chapters 4 and 5, where More explores pastoralia and devotional and educational writings stemming from these communities, respectively. As she underlines, their identities were always multiform and plural and did not only reside in external signs of identification or in adopting prescribed ideals of feminine religiosity but in embracing a variety of models of sanctity that appealed to their vocation (Chapter 4). That their group identity and historical reality was far more complex than merely institutional is emphasized in Chapter 5 which deals with the role of female leaders of these diverse communities and shows them actively involved in the education and edification of their sisters and the wider world. These women developed their own identities instead of following prescribed norms and their influence in 'religious and intellectual spheres' is revealed to have been far more important than previously thought (133f.). Last, Chapter 6 is a discussion of the sixteenth-century developments in order to show the continuities between medieval female groups and the new communities dedicated to active and contemplative life, often thought to have emerged anew after Trent. Like their earlier sisters, they continued to be objects of efforts of regularization that never managed to gather the diverse communities under a clearly defined canonical status.

More's study is more than a story of medieval women and their place in the 'spiritual climate' of their times. It is also a story of historiographical narratives that strove to define their place in the world according to canonical categories and religious ideals these women often failed to embody and follow from the Middle Ages through the modern times. Fictive identities will be useful to scholars interested in medieval religious women, gendered identities and historiography. The study is well supplied with the most updated literature in the field which makes it an excellent bibliographical resource for the non-specialist interested in the history of medieval lay women and religion.