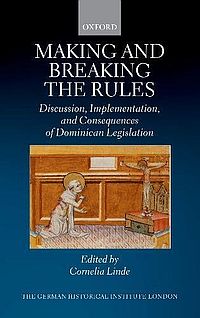 This volume is a contribution to medieval religious orders as social institutions. It is dedicated to the Dominican Order, which has been more recently studied by scholars as 'corporate history' and as an example of medieval representative government due to its pragmatic organizational structure and mechanisms of decision-making.

Regulations and uniformity are central issues in this collection which aims to discuss how rules were made, shaped, followed, bent or broken by the Dominicans from the 13th through the early 16th centuries. As the Order was an international organization, the essays cover a wide range of geographical and thematic areas in order to understand how regulations were made and implemented. The volume is organized around the ideals of unity and obedience (as a legal term and daily practice). As underlined in the editor's 'Introduction' (Cornelia Linde), the collection is structured along three overlapping lines of enquiry: the making of the rules, implementation and consequences of breaking the rules. In order to answer that, the authors draw on the Dominican legislative body (mainly the Constitutions, General and, to some extent, Provincial Chapters) as well as non-legal or 'para-legal' texts that had a normative value as they complemented regulations on various aspects of daily life and ministry. As the editor stresses in her 'Introduction', legislative/normative texts present limitations to historical interpretation in that they are 'idealizations' and reflections of self-understanding. (7) Thus, contextualization and use of additional sources that functioned as guidelines for individuals and communities inform this thematically diverse collection.

The first section, 'Discussion', deals with the process of rule-making and focuses (with one exception) on the 13th-century legislation concerning general and specific issues related to the Dominican core mission - the salvation of all. Gert Melville reviews the Dominican legislation as 'system rationality' that strove to find a balance between the 'unalterable' and the 'alterable' law. While the former was embodied in the Constitutions, the latter was contained in a series of legal items destined to respond quickly to specific situations, i.e. admonitions and inchoationes (amendments).

Christine Caldwell Ames further explores the issues of obedience and disobedience in relation to the inquisitorial office and the anti-heretical discourse to point out that inquisitors, appointed by the Pope, often escaped Dominican regulations, despite efforts by the Order to control them. Heresy is also the subject of Matthew Champion's essay, who shifts the discussion to the discourse on witchcraft of the 15th-century Observants in the Low Countries to argue that it was a projection of the reformists' 'anxieties' over the Dominican regulations and aimed to reinforce obedience among the friars themselves.

Christian Thomas Leitmeir discusses polyphony and shows that rules regarding music were rather general, which allowed for a diversity of practices and local arrangements. Dominicans' alleged core mission to convert non-Christians is revisited by Harvey J. Hames who looks at the source evidence related to the famous Barcelona Disputation (1263) and argues that, rather than converting, the Dominicans' purpose was to prove and strengthen Christian faith.

Sita Steckel concentrates on the 13th-century controversies between the seculars and the mendicants and demonstrates how these external pressures shaped the Dominican legislation, particularly the issues related to the practicalities of the preaching office.

Section 2, 'Implementation', comprises case-studies and instances of how rules were applied, adapted or bent. Two essays analyze liturgy and liturgical books to inquire into how uniformity was observed. Eleanor Giraud shows that, except for small regional variations, the Order managed to maintain unity in liturgical texts and practice.

Hrvoje Beban focuses on chant books and notes that the Dominicans from Dalmatia departed from regulations on musical practices even though the texts and sequences were observed. Architecture, on the other hand, was not explicitly regulated, as except for the ideal of simplicity, the buildings and the spaces of convents depended more on local customs and patronage than on a 'Dominican style' (Sebastian Mickisch).

Mercedes Pérez Vidal exemplifies the diversity of styles by focusing on female communities from late medieval Castile and further points out that architecture and liturgy in the nuns' convents were more influenced by patrons and local styles than legislation.

That legislative sources often did not serve the complexities of daily life and aspirations of female communities is analyzed by Gilberto Coralejo Moiteiro who concentrates on non-legal normative texts that regulated communities of Observant nuns from Portugal.

Last, two essays discuss Dominican regulations on language studia and preaching, respectively. Johnathan Rubin explores the teaching of foreign languages (Hebrew and Arabic) in the Province of Holy Land in comparison with the more studied Iberia and suggests that the friars acquired these skills rather informally and that they served them for translations, polemical works and diplomacy rather than for preaching to non-Christians.

Regulations on preaching as a performative act and apostolic ideal were equally general, notes Anne Holloway, who shows that the Dominican collections of exempla offered prescriptive models and rules for preachers.

Section 3, 'Consequences', explores examples of transgressions and of legal instruments the Order put in place to discipline the disobedient. Wolfram Hoyer, OP, and Cornelia Linde focus on imprisonment and deportations or temporary exiles, respectively. Hoyer gives a detailed catalogue of offences in the Dominican penal law over the last three medieval centuries, while Linde's focus is on crimes that endangered the proper workings of communities. The last two essays deal with the province of Dacia, another area that together with the Holy Land or the Iberian Provinces only recently have begun to be more systematically studied.

Johnny G. G. Jakobsen gives an overview of issues discussed across the volume, from the making to the breaking of rules and their impact on Scandinavian communities up to the Reformation. Kirsi Salonen adds more punctual instances of 'irregularity' concerning individual friars from the later Middles Ages by looking at the examples of appeals to the apostolic penitentiary.

Altogether, the essays show that uniformity and obedience to rules were not always easy to achieve. However, the flexibility of the Dominican legislation allowed for practical solutions that accommodated individuals and communities of friars and nuns in their specific local circumstances without sacrificing the overall goals of the Order. This volume thus offers a fresh and balanced view of Dominican law and practice, especially due to its thematic, geographical and chronological breadth. It will stimulate further comparative research on subjects and regions that remain underexplored in institutional and religious history, e.g. Dominican communities in the Iberian and other provinces somewhat outside of the scholarly mainstream.