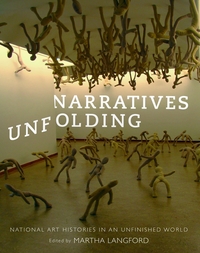 The anthology Narratives Unfolding: National Art Histories in an Unfinished World explores the re-writing of national art histories in the twentieth and twenty-first centuries in light of the processes of globalization and prevailing theories of postcolonialism. The editor Martha Langford has taken on an ambitious project in curating the anthology. Langford is director and research chair of the Gail and Stephen Jarislowsky Institute for Studies in Canadian Art and a newly appointed member of the Royal Society of Canada. She is Professor of Art History at Concordia University in Montreal, Quebec, and editor-in-chief of the Journal of Canadian Art History/Annales d'histoire de l'art canadien. Narratives Unfolding is her most recent book-long project.

The anthology presents 16 diverse chapters loosely held together by their goal to investigate the ways in which art histories may be negotiated on either a national or transnational level. More specifically, they probe the questions outlined in the book's Introduction: "How does the writing of art history contribute to the national imaginary?" and "How might its rewriting help us to imagine community in more salutary formations?" (36). The essay topics belong to the histories of modern and contemporary art and architecture, yet the topics tend to be omitted in the traditional master narrative for political reasons. For example, the author Inbal Ben-Asher Gitler reflects in her chapter on the historiographical use of the term "Arab Village" in Israeli architecture. She proposes that the term signifies a "third space." It serves to imagine not only a Palestinian "Other," overwhelmingly presented as such in postcolonial thought, but also as a productive "source of inspiration" with multiple possible meanings (112). Her chapter draws attention to the selective frameworks employed by postcolonial writers in their haste to critique nation building.

Langford's Introduction sets the stage and reviews the literature on art history in a global context and in postcolonial discourse. She draws particular attention to the writings of Homi K. Bhabha, mentioned repeatedly throughout the anthology. Chapters 2-5 examine the voids in national narratives on art. For example, author Ceren Özpinar reveals how Kurdish identity falls through the cracks in Turkish contemporary art. The next five chapters point to the often louder voices of cultural institutions: Merav Yerushalmy's chapter demonstrates how an art gallery in Palestine/Israel responds to the lack of institutional archives on Palestinian art by creating their own memory archive and hereby legitimizing that memory. Æsa Sigurjonsdottir's chapter on the Rejkavik Fluxus group proposes that we think of art in terms of networks and relations rather than as a spatially determined and institutionalized practice. The final six chapters focus on the cultural translations and borders that question the concepts of center and periphery. Carla Taunton's noteworthy essay concludes the anthology with an exploration of indigenous contemporary performance artists in Canada and the ways in which they resist the culture around them.

Foreseeing a possible critique of the anthology, Langford begins her introduction by stating, "The word 'global' appears nowhere in the title of this book, yet it strides like an éminence grise through its chapters" (3). Searching for the logic behind the collected essays does raise the question of their geographical representation. Nine of the essays focus on Western art. Four chapters address art in the Middle East, and only one chapter draws on an exhibition in Calcutta, India, while another looks at Egypt. Most of Africa, East and Southeast Asia, Australia, and Central and South America are excluded from representation in the anthology. Notably, the heavy focus on the West reflects the location of the publication (Canada) and earlier conference, as the editor also notes. The majority of the essays stem from a 2014 conference session "Networked Nationalisms" hosted by the Association of Art Historians (AAH) in London, UK. But, inadvertently, the lack of a balanced global representation ends up reflecting the theme of the anthology itself, namely how national interests and power relations operate behind the scenes. The composition of the book demonstrates how the West, its institutions, methods and foci, continue to dominate art historical discourse.

In contrast, the theme of globalization is tangibly felt in many of the essays. For example, Tammer El-Sheikh's chapter presents contemporary Egyptian artists who challenge Western art institutions including the magazine Artforum. In the context of these Egyptian artists, Artforum comes to represent Western capitalism, even orientalism. Alice Ming Wai Jim's chapter compares the urban environments of Vancouver and Dubai. The way in which these "twin cities" conveys the trait of sameness, so familiar in critiques of globalization, becomes the focal point for artistic interventions. At times, the compilation of essays seems more arbitrary than curated. But the book as a whole remains impressive in its ambitious goal to re-write art histories from both within and beyond political borders.