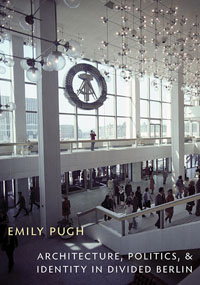 Architecture, Politics, & Identity in Divided Berlin is the newest addition to the series "Culture, Politics, and the Built Environment" published by the University of Pittsburgh Press and edited by Dianne Harris. [1] The book's author, architectural historian Emily Pugh, provides a strong contribution to recent scholarship on the Cold War German built environment. She effectively balances her analyses of the urban and visual environments of East and West Berlin.

In seven chapters, chronologically arranged, she investigates Berlin's urban milieus, primarily from the late 1940s to the 1990s. While the first chapter ("Modern Capital, Divided Capital: Berlin before the Wall") provides the background setting for the early postwar period (19-61), the following chapters illuminate the urban planning of East and West Berlin ("A Capital without a Country: Shaping West Berlin's Image in the Early Cold War" and "The Unbridled Buildup of Socialism: Defining and Critiquing Heimat-GDR"). Pugh shifts her focus between the two cities with an examination of their architectural, political, and economic conditions. For example, chapter 4 ("The Dreamed-of GDR: Public Space, Private Space, and National Identity in the Honecker Era") highlights the ways in which the dream of socialism in the East was expressed architecturally during the Honecker era (155-199), while chapter 5 explores the counterculture of West Berlin ("Capital of the Counterculture: West Berlin and the Changing Divides of the Cold War West"), including squatting, and the city's persistent social problems (200-240). Chapter 6 examines the "identity crisis" and attempted renewal of West Berlin ("Back to the Center: Restoring West Berlin's Image and Identity"), with the Internationale Bauausstellung (IBA) of 1987 (241-282). The final and 7th chapter bears the title "Collapsing Borders: Housing, Berlin's 750th Anniversary, and the End of the GDR" and focuses on the last years of the GDR and the city's jubilee in 1987 (283-328).

Key to the larger goal of the book's project is the ways in which places become acutely visible near boundaries, especially those near conflict. The confrontation of "either / or" in ideologies thoroughly shaped developments in the urban environments, as her study clearly demonstrates.

Pugh's methodological approach is to provide a "microhistory" that seeks to eliminate the static object and regard it, instead, as part of a constellation of shifting planes and relational differences depending on the environments and viewpoints at hand. Alltagsgeschichte (everyday history) becomes especially important for a history of the GDR, as she rightfully argues, since the viewpoints of the SED leadership and GDR citizens were often so strikingly distinct (7). This "microhistory" approach becomes materially evident in her project when she shows how the changing economic and political conditions influence the formation of identities in both East and West Berlin. Because her chapters are divided into decades, she frames the built environment in its historically contingent and local context and manages to successfully emphasize the more subtle social developments taking place.

Her focus on the representation of architecture means that Pugh's project also aims to demonstrate how the public imagination shaped and was shaped by its urban environment in divided Berlin. The city image produces its identity. While the book does not theorize its concept of identity formation as much as one might wish, considering its prominence in the title, the book remains theoretically complex in other ways. It takes into consideration the concerns of both a top-down and bottom-up narrative. It also concerns itself with a broad examination of the perceptions and attitudes about the urban environment, expressed visually and through various media, especially cinema. For example, as a way to address how West Berlin's drug culture and prostitution problems affected the area around the Zoo Station, she draws on the popular culture of the period by means of the 1979 book Children of Zoo Station as well as the 1981 film Christiane F. Such a wide-angled approach may potentially disappoint some readers looking for a more object-focused architectural study, and while it does create some disorganization as she jumps from one medium to the next, the greater objective is by all means worthwhile: Architecture merges with politics and visuality in often urgent and complex ways, always contingent on time and place.

Thorough in its use of secondary and primary sources, one still questions, at times, why some examples are chosen over others. West Berlin's Ernst-Reuter-Platz is mentioned in passing, for example, though Gabi Dolff-Bonekämper's account of the square and its political instrumentalization as an image of the new, postwar Berlin would appear to be highly relevant. [2] On the other hand, Pugh provides to my knowledge the first interpretive account of the intentions behind and critical reception of the IBA project of 1957 (47-61) and 1987 (252-272). She presents what appears to be the first cultural historical account of the 750th anniversary of Berlin in 1987 (at least in an English-speaking publication), reflecting on the ways in which divided Berlin constructed an image of the city through this important political and historical event (246-252, 316-328). Pugh also provides a compelling comparison of Heinz Graffunder's Palast der Republik (1973-76) in East Berlin, as well as Hans Scharoun's and Edgar Wisniewski's State Library (1967-78) in West Berlin in her concluding chapter (329-339). Her findings demonstrate how each monument sought to shape the city's image politically during the Cold War. [3]

[1] The book series "Culture, Politics, and the Built Environment" from the University of Pittsburgh Press, edited by Dianne Harris, currently holds five publications, 2010-2014, that vary in subject from small-town America and the American dream to the politics of Tito's planning of the city of Belgrade. The series approaches architecture and the built environment as part of a much greater social realm (http://www.upress.pitt.edu/browseDetailList.aspx?initial=57&type=series).

[3] See for example the upcoming exhibition at the Berlinische Galerie, "Radical Modern. Urban Planning and Architecture in 1960s Berlin", 29.05.-26.10.2015 and the forthcoming catalogue.