Ferenc Laczó: Hungarian Jews in the Age of Genocide 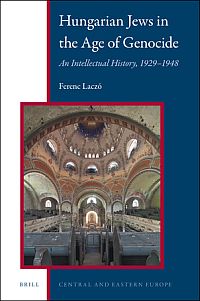 Ferenc Laczó's monograph is a groundbreaking study focused on Hungarian Jewish intellectuals from the interwar years, through the aftermath of the Second World War. He shows that Hungarian Jewish identity, although generally very Hungarian, was not nearly as monolithic as is often portrayed. Moreover, he shows that Jewish intellectuals engaged in diverse ways with the deteriorating situation of Hungarian Jewry and the unfolding Shoah. After the war their writings were important in setting the tone of public discourse for years to come.

Drawing on sources such as the yearbooks of the Israelite Hungarian Literary Society (Izraelita Magyar Irodalmi Társulat), the journal Libanon and the Ararát yearbooks, Laczó points out seven different options for Hungarian-Jewish identity that were articulated by scholars associated with the Budapest Rabbinic Seminary in the early interwar period. Four were 'various takes on dual identity' (29), seeing both parts as harmonious. The fifth contended that Hungarian-Jewish identity contained an inner conflict because of an over-emphasis on the Hungarian component. The sixth idea posited a complete merger between the Hungarian and Jewish parts of identity, while the seventh suggested that Jews should serve Hungary as true patriots (31-33).

Other writers continued to evince diverse approaches to Jewish identity; examples are Jenö Zsoldos and József M. Grózinger, who wrote frequently in Libanon. The former promoted assimilation and integration, whereas the latter posited that there was a Jewish cultural 'essence' with universal implications (58).

The passage of laws restricting Jews also engendered a variety of assessments regarding the new situation. Writing in 1940, Ernő Munkacsi believed the lack of true emancipation was the core issue, whereas Géza Ribáry, László Bakonyi and György Polgár essentially accepted the widespread notion that Jews played too large a role in Hungarian society and economy, and that the restrictive laws were necessary (69). The editor of Ararát, Aladár Komlós, thought the advent of restrictive laws signaled that Jews should turn inward. And Mózes Bisseliches, writing in Ararát, felt the situation was a strong justification for Zionism (70-72).

'What did they know?' about the events of the Shoah at the time in Hungary remains a contested issue, especially in public discourse. There is a strong body of scholarship that shows that information was available before the German occupation in 1944, although this does not mean that there was an unambiguous understanding of the Shoah. This is clearly reflected in the pages of Libanon and Ararát presented by Laczó. Throughout the 1930s, for example, Fülöp Grünvald followed Jewish persecution in Germany closely. By 1942 he had written about ghettos, deportations, resettlement of Jews to Transnistria, and 'the place of dying European Jewry' (94). Ernő Szilagyi, a member of the Zionist Relief and Rescue Committee, also addressed the murder. In 1943 he wrote about the 'perdition of Eastern European Jewry', and about grass starting 'to grow on the millions of new graves in the Galuth [diaspora]' (64). Laczó explains that although the portrayals were imperfect - few Holocaust victims were buried in traditional cemeteries, for example - readers could readily know that fellow European Jews were being murdered in great numbers.

The second half of the book examines how survivors framed their experiences in testimonies and in early publications. Using statistical analysis of the language used in testimonies given immediately after the war to the National Committee for Attending Deportees (Deportáltakat Gondozó Országos Bizottság), Laczó suggests that survivors made important distinctions about aspects of their experiences 'and thereby produced original and valuable historical knowledge as early as 1945-46' (123).

Analyzing early memoirs by Jews, Christians who had been regarded as 'racially' Jewish, and former political prisoners, Laczó shows how each group emphasized different features of persecution. Those who had been persecuted for political reasons tended to see the German occupation as the beginning of the trouble and 'relate only marginally to the genocide committed against European Jews' (160), whereas Jewish survivors highlighted more diverse experiences, less political lessons and more personal search for meaning. This, according to Laczó, contributes to our 'understanding of how the anti-fascist consensus was made through personal stories of the persecuted and why this emerging consensus consigned the history and the memory of the extermination of Hungarian Jews to a rather marginal position' (160).

Lastly, Laczó turns his attention to early Hungarian historical writing about the Shoah, comparing monographs by Sámuel Lőwinger (Germánia "prófétája", a nácizmus száz esztendeje), Ernő Munkácsi (Hogyan történt?), Jenő Lévai (Zsidósors Magyarországon), and Endre Sós (Európai fasizmus és antiszemitizmus). [1] He praises Lőwinger for his seminal exploration of the intellectual roots of Nazism. He considers Munkácsi's writing to be a rather apologetic presentation of Jewish leadership in Hungary despite Munkácsi's belief that the leaders had failed. Munkácsi also emphasized the role of the Hungarian Gendarmerie in the destruction. But echoing writings before the war, Laczó writes, he 'still seemed to believe in the "common fate" of Jews and Hungarians. For him the last year of the war was a tragedy for Jews and Hungarians' (176). Jenő Lévai, in Laczós words, 'was arguably the crucial pioneer of Holocaust historiography in Hungary' (177). Critical of both Jewish and Hungarian behavior, Lévai still assigned primary responsibility for the Shoah to the Germans. Lastly, the communist Endre Sós wrote about the Holocaust in a broader European perspective. His view of Jewish behavior was ambivalent, even contradictory, viewing the Jewish population as fighting anti-fascists but also as normative Europeans (190).

Unfortunately, to this reader's taste, the book is marred by a heavy-handed academic style. Had a good editor taken it in hand, it might have been made more readable without impairing the content. Nonetheless, this is a book that scholars and others who are interested in the Holocaust in general, and the Holocaust in Hungary in particular, should read. In tandem with Mary Gluck's excellent study [2] which touches upon some of the issues L. addresses about Jewish self-understanding, but regarding an earlier period, we now have a pair of excellent scholarly sources for exploring diversity and change in Hungarian Jewish identity and self-understanding during a tumultuous period.