Eric C. Steinhart: The Holocaust and the Germanization of Ukraine 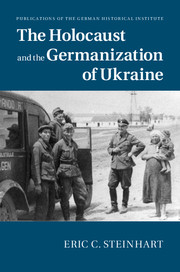 During the past few decades, there have been significant advances in research on the Holocaust in Eastern Europe. Due to the outstanding efforts undertaken by a number of scholars, today we have a far richer understanding about the Nazi genocide in this region of Europe. Eric Steinhart's The Holocaust and the Germanization of Ukraine, by focusing on the dynamics of the Holocaust in the little-known territory of Transnistria, represents another important contribution to this field. Steinhart's book engages two burgeoning areas of Holocaust research. One thread of his meticulous account, following the footsteps of Alexander Dallin, Wendy Lower, Karel Berkhoff, and others, examines the Nazi "imperial project" in Ukraine. The second area contributes to an older debate, prominently shaped by Christopher Browning and Daniel Goldhagen, exploring the causal mechanisms that set in motion the perpetrators of the Holocaust (Steinhart comes out on Browning's side). [1]

As many scholars of the Nazi regime may anticipate even before reading this book, Steinhart's research lays out the conspicuous chasm between the grandiose Nazi project of building Germandom in the East and the actual reality achieved on the ground in Transnistria. The "human material" at the Nazi's disposal proved to be the one of the most difficult "building blocks" for this imperial venture. Without a surplus of Germans in the Reich, and lacking wartime resources to relocate Germans to this piece of conquered Soviet territory, the Nazi regime was forced to erect its utopia with the help of Soviet ethnic Germans - in this case about 130,000 Volksdeutsche of the so-called Black Sea Germans. This group was subjected to a violent Nazification program and some of its members became involved in one of the most horrific pages of the Holocaust, being directly responsible for the killings of tens of thousands of Jews in Transnistria. Drawing heavily on postwar Soviet and West German investigative records, Steinhart is determined to examine the connection between the Nazification and genocide and find out "why so many local ethnic Germans participated in the Holocaust with apparent enthusiasm."

Given the stated goal of the author, many readers may be surprised to note that Volksdeutsche perpetrators of genocide in Transnistria were not very numerous. In fact, it seems quite shocking to realize from Steinhart that the massacre of 52,000 Jews in Bogdanovka was the work of about 130 armed men, of whom approximately 60 were Volksdeutsche militiamen, the remainder being comprised of Romanian gendarmes and Ukrainian auxiliary forces. [2] Moreover, in Steinhart's own words, the perpetrators did not seem particularly enthusiastic about their murderous tasks, at least not initially. Instead, the author pays detailed attention to the gradual transformation of many Volksdeutsche into skilled genocidaires. Central to this transformation is the remolding of an entire ethnic community, which had been placed under the direct administration of the Sonderkommando R (Special Command R

When tracing the motives propelling German ethnic militia into the mass killings in Transnistria, Steinhart concludes that antisemitism was secondary to "social psychological factors, including a tendency to group conformity and obedience to authority" (208). The evidence he presents relates to the fact that during the Bogdanovka massacre, the unit's SS officers "had to threaten, cajole, and encourage local residents to kill Jewish deportees." Stolen Jewish property and the SS's mighty propaganda machine also acted as an additional impetus for the killings that continued, with declining intensity, until the spring of 1942. By that time, as the author infers, "militiamen embraced mass killings" and, in turn, the SS recognized their Germanness, choosing to issue provisional Volksdeutsche identity papers to area militiamen and their families (158). In this, Steinhart agrees with Doris Bergen's conclusions about the East European Volksdeutsche using their participation in the Holocaust to clarify their previously suspect ethnic identity. [3]

The broader canvas of the process of Germanization reveals the quandary faced by a German community under Nazi domination: although the new Nazi order with its aim to help local Germans "to grow fat" initially appeared to be an improvement over Soviet rule, the severe ideological, political and racial demands that were simultaneously imposed on the entire ethnic group posed their own difficulties for the population. Very soon, Transnistria's Volksdeutsche understood that "they would need to navigate the SS's expectations or face potentially lethal consequences." (15) In 1942, when the SS discovered that members of this community still continued to shield Jews from murder, for example, a brutal campaign was launched against Transnistria's Germans, a campaign which, in Steinhart's view, "became steadily more radical than its effort against local 'Judeo-Bolshevik' enemies." Faced with continuous discoveries of racially and politically suspect residents, and frustrated by the poor progress of the Germanization, the SS subjected area residents to indiscriminate violence. By 1943 the unit's leaders recognized that this brutality was self-defeating and tried to curtail it by sacking local commanders and by erecting a concentration camp to systematize Volksdeutsche punishment.

One of the many interesting parts of the book includes Steinhart's less conventional description of the society encountered by the Nazis within this part of occupied Soviet territory. Although the author acknowledges the anti-Soviet feelings and antisemitism of locals, the empirical material marshaled for this section depicts a rather nuanced relation with the former representatives of Soviet power and Jewish communities. Notably, local Volksdeutsche did not indiscriminately denounce or strike out against Communist Party members, those who held positions under the Soviet regime, or members of the Jewish community. According to the evidence presented by Steinhart, locals predominantly reported on those former officials who were identified for carrying out earlier offenses (e.g., rape, putting somebody's name on a deportation list for personal gain, stealing goods of a deported person). These dynamics introduce new distinctions in the interpretation of the phenomenon of denunciations on Soviet territory. Extant explanatory models of denunciations focus predominantly on the issues of material gain, carrying out favors with the occupiers, prior levels of antisemitism, and general anti-Soviet feelings; these are gently sidelined by the reading of denunciations as a tool of punishment aimed at those individuals who were personally responsible for inflicting harm to Soviet citizens before 1941. [4] In addition, there is evidence to suggest that some ethnic Germans of Transnistria took action to save the lives of some former Soviet officials whom they did not consider guilty, and to save Jewish lives, when they realized that this group, as well as the children of mixed Jewish-Christian marriages, were sought by the Einsatzgruppe D for extermination.

The mission to Germanize Transnistria was handed directly to the men and women of the Sonderkommando R. Those "who Made Germans and Created Killers" (to use the heading of Steinhart's second chapter) were a diverse collection of specific backgrounds: Volksdeutsche activists, professional security personnel, Nazi party "old fighters", and ethnic Germans whom the Volksdeutsche Mittelstelle (Ethnic German Liaison Office) had relocated earlier from Eastern Europe. When detailing the personnels' activity and its interaction with the center, Steinhart embraces Wendy Lower's conclusion regarding "on the spot decision-making" as part of the organizational culture of German administrators in occupied Ukraine. The abysmal situation of local infrastructure, which greatly impeded communication with the center (the author mentions orders were primarily delivered weekly by mail), as well as the peculiar chain of command of Sonderkommando R, invited great leeway for local staff in decision-making. Subordinated directly to the Office of the Reichsfuhrer-SS, Sonderkommando R functioned as "Himmler's back-pocket Volksdeutsch affairs unit" in the occupied territories of the Soviet Union, yet only in Transnistria did it carve out unparalleled autonomy. If in other territories Himmler's subordinates were often confronted by other influential German organizations such as the Wehrmacht and civil administration, in Transnistria they had to contend only with their Romanian allies.

For some readers this last aspect of the relations between German and Romanian allies might be especially interesting. As some scholars previously observed, this relationship was not as straightforward as an alliance is often assumed to be, and the animosity and competition between these countries were frequently evident in Transnistria. [5] Steinhart brings further details to this discussion, observing that "at virtually every turn, Romanian occupiers wrestled with Sonderkommando R for control of Transnistria." (76) Even more importantly, the author sheds new light on the convoluted ways that these allies worked together in what led to the mass murder of Jews between December 1941 and April 1942 in Transnistria. Steinhart emphasizes, for example, that the Romanian deportations of tens of thousands of Jews to northern Transnistria, which were followed by a typhus outbreak among Jewish prisoners close to the homes of local ethnic Germans, were "the initial spark that ignited the murderous conflagration" in Bogdanovka (114). This typhus outbreak moved local SS commanders to enlist ethnic German residents to participate in the mass murder and, to a great extent, helped transform the area's ethnic Germans into killers.

In sum, Eric Steinhart's book tells yet another notable story of an unsuccessful attempt to build a Nazi Utopia in Ukraine with the help of local ethnic Germans. This attempt went hand in hand with the successful transformation of some "ordinary" Transnistrian German men into outstanding killers. While this account is not unique or revolutionary in its main findings, the book consolidates and enriches our earlier understanding of the Nazi's efforts of Germanisation in the East. Importantly, it also expands our empirical knowledge of the Holocaust in Transnistria and prompts new reflections on the specificity of the genocide on occupied Soviet territories. For these reasons it deserves careful and grateful attention from both historians of WWII, the Holocaust, and more broadly for those interested in genocide and questions of identity.