Marie Bader: Life and Love in Nazi Prague. Letters from an Occupied City 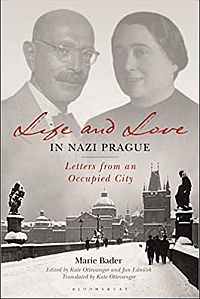 Marie Bader and Ernst Löwy were second cousins and had been long-time family friends, but the deaths of their spouses in 1936 and 1939 brought them closer together and kindled a passionate love affair between the two. There was only one problem. By this time, they found themselves in different cities in war-torn Europe. To escape German occupation in 1938, Marie and Ernst had both fled their hometown of Karlsbad (then part of the Sudetenland) and sought refuge in Prague. However, from there, Ernst travelled on to Thessaloniki to be with his daughter and son-in-law. Their great romance thus played out entirely in the letters that Marie and Ernst sent to one another between the years of 1940 and 1942. Both were murdered in the course of war and Shoah; Marie at an unknown location in eastern Poland, Ernst in Auschwitz-Birkenau.

Kate Ottevanger, Marie's granddaughter, and her son discovered 154 of the letters written from Marie to Ernst decades later in their attic, and Life and Love in Nazi Prague presents a selection of these letters for the first time. Ottevanger translated the letters and edited the volume together with Jan Láníček. Regrettably, the conversation is one-sided, as Ernst's letters to Marie did not survive the war. But seldom does such detailed correspondence from anyone during that time period surface. As such, these letters offer a trove of information and reflections from a remarkable woman.

The book divides the letters into four time periods, each section begins with brief background information from the editors to situate Marie's letters in their broader historical context. The first section presents letters written between October 1940 and April 1941. After a gap in correspondence, presumably due to Germany's invasion of Greece in April 1941, the second set of letters covers the period from June to September 1941. The first two sets of letters reflect upon the difficulties Marie faced as a German-speaking, Jewish refugee in Prague. And yet they are notable for their determined, even cheerful, optimism that she would soon be reunited with Ernst.

With Reinhard Heydrich's arrival as Acting Reich Protector in Bohemia and Moravia in September 1941, the plight of Jews in Prague worsened considerably. Readers thus note a marked shift in tone in the third set of letters, written between September 1941 and January 1942. It was during this time that deportations of Czech Jews to Poland and Theresienstadt began. The final set of letters covers the period from January 1942 until Marie's deportation to Theresienstadt in April 1942.

As Láníček remarks in the introduction, a detailed social history of Jewish life in the Protectorate of Bohemia and Moravia has yet to be written. Marie's letters will surely serve as an important source base in this future endeavor. More than that, however, this book will be an important resource for scholars making other inquiries in Holocaust history - most notably: sexuality and the Holocaust, Jewish agency in the Holocaust, and transnational histories of the Holocaust.

Marie freely and unapologetically expressed her love for Ernst in her letters, despite the fact that some of the letters first passed through her cousin in New York. Moreover, fully aware that her letters were to pass under the careful eye of censors, Marie often explicitly addressed the "respected Herr Censor," hoping flattery might help her letters make it through (126). The letters paint a portrait of a woman of her own making, a woman in control who looked ahead to brighter days with steadfast determination. Through their correspondence, Marie and Ernst created an alternative world together that sustained them through an era of great hardship. Furthermore, the letters are indicative of the transnational networks of correspondence that existed between Jews in Europe and abroad at this time. From Prague, Marie sent and received letters and parcels from Thessaloniki, Vienna, New York, Lodz, Hilversum, and beyond.

Despite the censorship, and Marie's own self-policing, her letters become more explicit over time and reveal a wealth of detail - about political developments in Prague, relations between Prague Jews and refugees from the Sudetenland, about the Kultusgemeinde and its regulation of Jewish life in Prague, the start of deportations, and even about the fates of Jews in Theresienstadt and Poland. Marie was surprisingly well informed, and censors allowed a great amount of information to pass through.

But Marie often wrote ambiguously and employed code names for people and places purposely to mislead the censors. This is where Ottevanger's and Láníček's editorial work is most impressive. They carefully decoded Marie's writing, providing helpful footnotes to render her most urgent but disguised messages comprehensible for readers today. For example, Marie referred to her daughters as "the cousins" and spoke of visiting the "Ashkenazis" and the "Lichtmanns" to indicate the destination of some deportations to Poland. Deciphering this type of language would have been difficult for independent scholars and general readers on their own.

The editors have interspersed many photos throughout the text, which add a welcome visual component to the book. Several photos of the letters themselves would also have been a welcome addition, especially as Marie's letters switched from typed to hand-written after she was forced to relinquish her typewriter. Additionally, the editors might have employed more footnotes in the introduction to point readers to relevant scholarship and sources and to place Marie's letters in their broader historical and historiographical contexts. However, on the whole, these minor comments do not detract from the significance of the book for Holocaust scholarship.

Ottevanger has done us a great service by bringing her grandmother's story to our attention. This book offers a rare account of a Jewish woman during this era. Marie Bader's letters should rank among the diaries of Victor Klemperer and Willy Cohn when scholars and instructors reach for detailed sources on the everyday life of victims in Nazi Europe. Life and Love in Nazi Prague is an inspiring example of the best that can happen when scholars and presses work together with family members to bring these important stories to light.