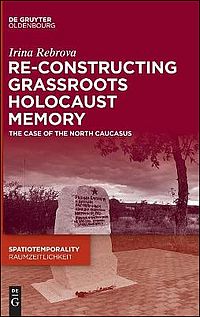 Eighty years after Nazi Germany launched its war of extermination against the Soviet Union, it is about time to revisit a region that played a pivotal role in these two powers' struggle: the North Caucasus. Despite the relative brevity of the German occupation in 1942-43, this southernmost region of today's Russian Federation just north of the present-day states of Georgia and Azerbaijan was essential to the war effort because of its oil resources and geopolitical significance as the gateway to the Middle East. The Germans shifted their colonial practices here and aimed at winning over the diverse indigenous population, assuming it harbored hostility towards Soviet domination; and Stalin's post-occupation retaliation against the Chechens, the Ingush, and others in the form of forced relocation has been deemed by some as genocidal.

The history of the Holocaust in the North Caucasus is unique, as well: while it was, prior to German occupation, a prime destination of a Soviet evacuation program - at least 50,000 European Ashkenazi Jews, among other refugees from western territories, were relocated here - up to 60% of all Jewish victims killed on what is today Russian territory (some 60,000-90,000) perished here. And while the former were almost wiped out during the only months-long German occupation, the indigenous Jews of the region - so-called mountain Jews and Karaites - survived mostly thanks to German confusion as to their correct racial status calling the bluff of race theory itself. The fascinating case of the German racial logic failure both towards Jews and non-Jews (and subsequent Stalinist persecutions) makes the North Caucasus a specifically productive case of Holocaust history and memorialization. It is a unique site to problematize cherished Western liberal dichotomies in Holocaust studies and memory, calling into question the neat separation between innocence and evil, victim and perpetrator, and above all exactly those tidy racialized categories the Nazis themselves tried to enforce.

Irina Rebrova is untroubled by these questions. Her book is an ambitious and significant work which excels in year-long diligent and innovative sociological research. It focuses on the Holocaust history of the region's Ashkenazi Jews and traces how this history inflected the interethnic memory formation in a region with only a miniscule postwar Jewish population. To do so, she employs what is called memory dispositive analysis, fleshing out the interplay of top-down and bottom-up practices of Holocaust memorialization, understood as working not as part but against the hegemonic memory cult of the Great Patriotic War. Following an overview of the region's geography, demographics, and (Holocaust) history (ch. 2), she analyses official Soviet wartime sources (ch. 3), mnemonic practices in the form of monuments (ch. 4), North Caucasian art (ch. 5), museal practices (ch. 6), teaching and history curricula in local secondary schools (ch. 7). All these arenas, as she demonstrates, have tackled local Holocaust history rhizomatically in one way or another from 1945 onwards; sometimes more, often less; sometimes as a distinctively Jewish catastrophe, more often as a universal Soviet one; and most often, impressively, on a grassroots level by non-Jewish actors. A close reading of Re-Constructing Grassroots Holocaust Memory reveals, however, theoretical limitations and problems, among them the perpetuation of the German's problematic racialized classifications of Jews.

While the study's localized focus and original theoretical framework are a welcome addition to the budding field of Soviet/Post-Socialist Holocaust memory studies, it is the use of theory that troubles this reviewer. The concept of a dispositif (in English often rendered as apparatus), which is borrowed from Michel Foucault, deals with an interplay between heterogeneous discursive and non-discursive elements in the constitution of knowledge and subjectivity, and has been applied to the study of collective memory by such writers as Laura Basu [1] and Magdalena Nowicka [2]. Rebrova claims that a Holocaust memory dispositif can "shed new light on the political, subjective, temporal, ethnic, and cultural dimensions of Holocaust memory, and the mutual influence of different Holocaust memory elements in a particular region, as well as in the USSR and post-socialist Russia more broadly" (16), but her own analysis seems to undermine this. Importantly, her study lacks what Foucault himself called a "critical ontology" [3]: a self-reflexive questioning of one's own positionality (in her case, a presumably North Caucasian native who today lives and works outside the post-socialist space) and a priori ideas in structuring the very dispositif one is creating and studying (in this case, a Western Shoah-centric paradigm). Had she done so, she would have very quickly run up against the impossibility of naturalizing the term Holocaust and its memorialization (see especially her uncritical celebration of the righteous among the nations program, the March of the Living, or Kiev's highly problematic Babi Yar memorial project) in a Soviet/Russian case study. Holocaust and Holocaust memory need to be dispositified themselves, as it were, and cannot simply be applied to a memory regime that so clearly followed different ideological, chronological, aesthetic, and conceptual rules until its collapse when it was tasked to renew itself instantaneously. Rebrova's unrelenting anti-Communism and her rather simplistic reproduction of monolithic accounts of Soviet war memory fail to engage with available recent scholarship into postwar Soviet memory, subjectivity, and the Great Patriotic War (for instance the work of Polly Jones [4] and Jochen Hellbeck [5]). A more theoretically disciplined analysis than Rebrova's would try to flesh out the very Soviet dispositive she ultimately narrates in a more nuanced and, importantly, nonpartisan way - one which negotiated the mass killings of Jews in erratic ways as part of the war dispositif on the basis of Marxist-Leninist thought (not mentioned), through an antifascist lens (mentioned once), and within a Cold War framework (rather ignored) - and follow more closely how it responded to the ultimate crisis, so essential to dispositive analysis: the collapse of the Soviet Union, the triumph of a Western Holocaust paradigm and, what I call its mnemonic imperialism, which has been problematized by a host of scholars before.

The many technical shortcomings of Rebrova's monograph notwithstanding, Re-Constructing Grassroots Holocaust Memory: The Case of the North Caucasus is an important contribution to the study of 'Holocaust' memory in the Soviet Union based on impressive research (the polls she circulated among local teachers, her field trips to local museums and memorials, her interviews with Holocaust survivors and educators). It will be of value for scholars on the North Caucasus and Russia more broadly.