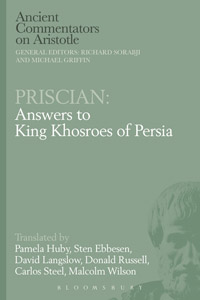 This is a truly impressive communal effort, on the part not only of the authors mentioned above, but also of Richard Sorabji (General Editor of the series) himself, and a number of other scholars appealed to for their particular expertise, such as Alan Bowen, Stephen White and Vivian Nutton. This work of Priscian's (or at least edited by Priscian) is a very odd one, it must be said, and produced in thoroughly odd circumstances. Furthermore, it is preserved only a rather imperfect mediaeval Latin translation, which calls for acute paleographical skills and a fine talent for retroversion.

The work arises out of the famous visit of a group of distinguished late antique Platonist philosophers, notably Simplicius, Damascius and Priscian, with four others, to King Khosroes of Persia, at his invitation, in 531 CE, following on Justinian's effective closing of the philosophical schools in the empire, but most significantly in Athens, in 529. Khosroes is a rather attractive figure, reminding one somewhat of Kublai Khan much later in China (as observed by Marco Polo), in his lively interest in the philosophies and religions of surrounding nations. He made the philosophers most welcome, and proceeded to pick their brains on a series of questions that interested him.

Sadly, however, these questions were not in general central to the interests of the Platonists whom he was entertaining, and within a year or so they decided, in a body, to go home; whereat he very nobly arranged a deal with Justinian, securing that they would not be molested on their return. Meanwhile, however, a series of sessions took place in Ctesiphon, at which the questions were posed that are the subject of this book.

It was Priscian who drew the short straw for the task of writing up the responses, and he did a valiant job of it. Khosroes presented ten quaestiones, of which really only four, I should say, concern philosophical issues of much interest to a Neoplatonist: (1) About the Soul, and especially the Human; (2) On Sleep; (3) On Dreams as a Source of Prophecy; and (9) Why do Things in a Good Universe Harm Each Other? Otherwise, Khosroes is concerned with issues which, while within the ambit of ancient philosophy in the broadest sense - and particularly within the Peripatetic tradition - would not be of vital concern to most later Platonists, though doubtless of considerable interest to a reigning monarch. These comprise the following: (4) Astronomy and Climate; (5) On the Efficacy of Contrary Medical Prescriptions; (6) The Tides; (7) How Elemental Bodies get Displaced; (8) How Location Affects the Character of Living Things; and, last but not least, (10) Of What is the Wind Made, and Where Does its Motion Come From?

Each of these in this edition has been assigned to a scholar of great competence: (1) to Carlos Steel, (as befits a major authority on Neoplatonic psychology); (2), (3), (4), (6), (7) to the indefatigable Donald Russell; (5) and (8) to Sten Ebbesen; and (9) to Ebbesen, with David Langslow - though in all cases the main editor is helped out by notes from other colleagues, notably Pamela Huby, Vivian Nutton, and the General Editor himself. Indeed, Richard Sorabji, as well as composing the general Introduction, contributes both introductions and extended notes to most of the Answers - even as Simplicius probably helped out Priscian with many of the originals.

I found the whole a surprisingly entertaining read; one can empathise with Khosroes' interest in such topics as the reasons for tides, winds, and the influence of location on national character. The one mystery that bothers me - addressed briefly by Sorabji in his excellent introduction - is that of what scholarly resources Priscian had available to him when composing his answers, and indeed where we may suppose that he composed them. It is notable, after all, that he makes extensive use, for various quaestiones, of a series of Aristotelian works, On Sleep, On Dreams, On Divination through Sleep, Meteorology, On Generation and Corruption, On the History of Animals, as well as various works of Theophrastus - and some later works, such as Arrian's Meteorologika, and various commentaries of Alexander of Aphrodisias - which Priscian can be seen frequently to be making close use of. As Sorabji reasonably concludes (4-5), either the philosophers arrived in Ctesiphon with the bulk of the holdings of the Athenian School loaded onto the backs of a train of camels, or Priscian in fact wrote up his replies after he got home, and sent them off to Khosroes by courier. The latter has surely to be the answer, since after all the philosophers can hardly have known in advance what topics his Majesty was interested in before they arrived - if they had, they might not have bothered to visit in the first place!

The volume is rounded off with the usual indices - though in this case also a Latin-Greek index, as well as an English-Latin and a Latin-English - all composed by David Robertson. All in all, this is a splendid communal scholarly enterprise, finely orchestrated by the General Editor.