Myrto Hatzimichali: Potamo of Alexandria and the Emergence of Eclecticism 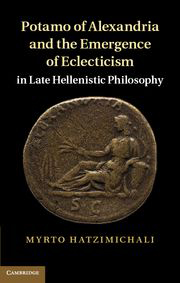 One's first reaction on seeing such a title, I should say, would be "How on earth could anyone write a book, even a comparatively slim volume, on the Eclectic philosopher Potamo of Alexandria?" But Hatzimichali has done this, and done it rather impressively - though of course she has discussed a number of other topics and figures in the process. In fact, she has produced here a little gem of lucid and prudent scholarship.

Potamo is in fact a figure of great obscurity, being mentioned virtually only by Diogenes Laertius at the end of the Prologue to his Lives of the Eminent Philosophers, but also in a few other places (sc. Simplicius, In De Caelo, and the Suda) - if one can be sure that the same person is being referred to. Hatzimichali opts in fact for taking most of the references as referring to the same person (there is at least one other individual in play, the orator Potamo the son of Lesbonax), and she seems to me to be reasonably justified in this.

The book is divided into an introduction and seven chapters, the last being a conclusion, and the fourth constituting the core of the book, a detailed analysis of the evidence as to Potamo's philosophical position. Chapter 1 discusses the concept of eclecticism in modern and ancient thought, making good use of Pier-Luigi Donini's article in Dillon and Long, The Question of Eclecticism (Berkeley, 1988), but also adducing useful evidence from the ancient world, especially in the area of ancient medicine. Chapter 2 ('Eclecticism and Alexandria in the first century B.C.') relates this to the realities of intellectual life in the Alexandria of Potamo's (presumed) time, emphasising the fact of the library and the research tradition surrounding it, and pointing to recent developments in philosophy - the possible influence of pupils of Antiochus of Ascalon, such as Aristo and Dio, and of such a figure as Eudorus, or Arius Didymus; while in Chapter 3 ('Potamo of Alexandria, Life and Work'), Hatzimichali focuses on what we know of Potamo himself, which is, sadly, little enough: the Diogenes Laertius passage, a short notice in the Suda (at least pinning him down to the time of Augustus), and an intriguing fragmentary inscription from Miletus, honouring 'P[otamo] of Alexandria, Eclectic Philosopher, from [the Museum]', where the name, though largely missing, is restorable with virtual certainty. Potamo is the only known eclectic philosopher, and he would seem to have been reasonably famous in his own day for being that.

If we ask where Potamo might have derived his bold idea of proclaiming himself head, or spokesman, of an 'eclectic sect' (eklektikê hairesis), the most probable source, as Hatzimichali suggests (20-24), would be the medical tradition, in which we know (from Galen) that there were doctors who called themselves - or at least were called - eklektikoi (Def. Med. XIX 353 Kühn). It is not clear, however, that these doctors were regarded as an organised group, or hairesis. This does, as she maintains, seem to be the case for Potamo. He is not just picking and choosing from the supermarket shelves of Hellenistic philosophy; he has assembled a (reasonably) coherent set of doctrines, covering the three main branches of philosophy, logic, physics and ethics, drawing on an amalgam of Platonism, Peripateticism and Stoicism, and he has forged this into a hairesis.

It is the precise content of this amalgam that is the subject of Chapter 4. Here Hatzimichali takes us through the various elements of Potamo's system, beginning with the criterion of truth (82-103), then the first principles (103-124), and lastly, his ethical position, involving his definition of the telos (124-139).

Potamo's doctrine of the criterion, first of all, exhibits clear Stoic traits, but on the other hand Hatzimichali shows that the influence of the Theaetetus must be reckoned with, probably mediated through Antiochus. As for the first principles, they are an interesting lot: a passive principle (paskhon), which is a substance devoid of quality (apoios ousia), or matter, and an active principle (poioun), which is the logos in matter, or God; there are also two apparently secondary principles, Quality (poiotês) and Place (topos). All these except the third are associated with prepositional labels, ex hou, hyph' hou, en hôi - but Quality is characterized anomalously as poiôi. She has a good discussion of this (113-117), but it still seems odd to me (di' hou is what one would expect for the 'instrumental' principle, which this is). At any rate, what we have here is once again a modified Stoic system reminiscent of that of Antiochus.

The same goes for Potamo's ethical ideal, which is "a life perfect with respect to all virtue, not without (ouk aneu) the things pertaining to the body by nature and external things." In fact, Potamo's originality seems to me to lie, not so much in the distinctivenss of his doctrines, as in his bold assertion of newness, or 'otherness' - in contrast to such a man as Antiochus, who is claiming rather to re-establish the true teaching of the Old Academy.

Hadzimichali goes on, in ch. 5, to discuss the interesting passages preserved in Simplicius involving comments of Potamo - or some Potamo - on Aristotle's De Caelo, from a rather critical, Platonist perspective (including an interesting discussion on whether the Platonic bodies can completely fill space). These, together with the report in the Suda that Potamo composed "a commentary on Plato's Republics (sic)", would suggest a Platonist background for our hero - but if that is so, he has no desire to claim it.

All in all, as I say, this is a fine study, which has much of interest to say not just about Potamo, but about the Hellenistic and Alexandrian intellectual scene in general. The only omission I would note is that of the contemporary Jewish philosopher Philo of Alexandria, who is, like Potamo, forging a philosophical system out of all previous Greek philosophy (apart from the Epicurean), but in his case attributing the result to Moses. Whether the two were acquainted each other we cannot know, but they have actually a good deal in common.