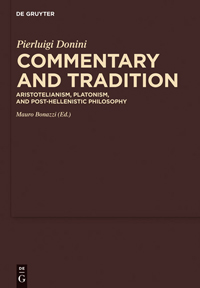 This volume is a fine tribute to a major figure in the field of later Greek philosophy, and it is very good to have. Mauro Bonazzi and (originally) Robert Sharples (whose participation in the enterprise was sadly cut short by his death) have here collected a selection of 24 articles of Pier-Luigi Donini, including two hitherto unpublished, covering over thirty years of his scholarly activity. The volume is divided into two sections, with twelve articles in each, corresponding to his main areas of interest, the first covering Aristotle and the Aristotelian Tradition, the second Platonism and Post-Hellenistic Philosophy. The volume is completed by a full bibliography of Donini's works, and an index of passages quoted. A full set of indices would of course have been desirable, but one can't have everything!

The best one can do, I think, is to run briefly through the papers gathered here, picking out some highlights and recurring themes. Donini sets out his principles of interpretation in his important book Le scuole, l'anima, l'impero. La filosofia antica da Antioco a Plotino (1982), and these articles develop them further in various ways.

The papers in the first section are divided between Aristotle himself (4), Alexander of Aphrodisias - a figure to whom Donini has given much attention over the years (7) -, and one devoted to Aspasius and Apuleius. Aristotelian are: 'Il libro Lambda della Metafisica e la nascita della filosofia prima'; 'Mimesis tragique et apprentissage de la phronesis'; 'Cause, volontarietà e decisione in Aristotele, Rhet. I 10-15' (previously unpublished); 'Aristotele, De motu animalium 701a7'. In these, he characteristically fixes on a particular passage which leads him to a more general conclusion: the question of the existence of a set of common principles for all sensible substances at the beginning of Book Lambda, a possible political aspect to the definition of tragedy in ch. 14 of the Poetics, a distinction between the concepts hekousion and prohairesis in certain chapters of the Rhetoric, or the grammatical structure of a sentence in the De motu animalium having a bearing on Aristotle's doctrine of the practical syllogism. In all of these, the points made are interesting, and, I think, very sound.

The papers concerning Alexander open with 'Alessandro di Afrodisia e i metodi dell' esegesi filosofica', where Donini gives an excellent account of Alexander's exegetical method (analogous, in fact, to that of Plotinus with regard to Plato), of seeking above all to preserve Aristotle's consistency with himself. This leads inevitably to the creative adducing of parallel passages to produce doctrines that Aristotle would not have held as such, but is still far superior to the approach of the Neoplatonic commentators. The next essay, 'L'objet de la Metaphysique selon Alexandre d' Aphrodisias', addresses Alexander's attempt to reconcile Aristotle's (apparently) conflicting views as to the proper object of 'first philosophy', focusing on a passage of Metaphysics Gamma 2, where Alexander is led astray by an aberrant reading of the text.

The next paper, 'Theia dynamis in Alessandro di Afrodisia', explores two solutions provided by Alexander in Quaestiones II 3, possibly in answer to atttacks by Platonists such as Atticus, to the mode of operation of divine providence in the sublunary world. The workings of providence are also explaored in 'Alexander De Fato: Problems of Coherence', where Donini resolved an apparent inconsistency in Alexander's exposition by close attention to the meanings of words - in this case antikeimenon. The question of Alexander's consistency is also addressed in the next paper, 'Doti naturali, abitudini e carattere nel De Fato di Alessandro', this time building explicitly on certain insights of Jaap Mansfeld, in whose Festschrift this was included.

This is followed by a short piece containing a fine emendation of an important passage of Alexander (De an. 90, 23ff.), concerning the active intellect; and that in turn by another essay in emendation, this time of Simplicius (In de Caelo 13, 22ff.), concerning Alexander's objections to Xenarchus regarding the existence of a third simple motion, in addition to straight and circular motions.

The final essay of the first part of the collection, 'La giustizia nel medioplatonismo, in Aspasio e in Apuleio', considers an interesting reference in Aspasius' preface to his commentary on the Nicomachean Ethics to 'theoretical justice' as being proper to the gods, in relation to a similar characterisation of a higher form of justice by Apuleius.

The second part of the collection begins with an essay commissioned by Tony Long and myself back in 1988, 'The History of the Concept of Eclecticism', which I found an excellent survey of the topic then as now, bringing to light as it does the positive as well as the negative uses of the term throughout history. This is followed by an extended survey for Aufstieg und Niedergang (II 36: 7, 1994), 'Testi e commenti, manuali e insegnamento: la forma sistematica e i metodi della filosofia in età postellenistica', the main argument of which is that later Platonists and Aristotelians were concerned to systematize their philosophies as much as possible, to compete with the well-known completeness of the Stoic system. Next, we find a review-article for Elenchos on an earlier volume of ANRW (II 36: 1) on 'Middle Platonism', 'Medioplatonismo e filosofi medioplatonici. Una raccolta di studi', in which Donini is moved to meditate on the usefulness or otherwise of the very term 'Middle Platonism', and coming down in favour, though with the caution that it must not be thought of as connoting any great degree of doctrinal unity - a conclusion with which I would concur!

Next we have a finely-argued study of the sources for Seneca's Letters 58 & 65, 'Le fonti medioplatoniche di Seneca: Antioco, la conoscenza e le idee', where Seneca is plainly dependent on some Platonist authority, which Donini, following Theiler, comes down in favour of identifying with Antiochus of Ascalon. I had argued tentatively (Middle Platonists pp. 135-9) for Eudorus, but I readily concede the claims of Antiochus, and this would, as Donini argues, deepen our understanding of Antiochus' theory of knowledge.

We then turn, with 'Plutarco, Ammonio e l'Academia', to Plutarch and the significance of his curious remark in the De E about 'learning moderation on joining the Academy', in relation to joining the school of Ammonius. Donini, basing himself on a critique of John Glucker's study Antiochus and the Late Academy, concludes that the expression must be taken figuratively, and that there is no significant distinction in doctrine between Ammonius and Plutarch. The next five papers also concern Plutarch: 'Science and Metaphysics: Platonism, Aristotelianism, and Stoicism in Plutarch's On the Face in the Moon' (also from Dillon / Long, Eclecticism) pulls together the two parts of the dialogue most effectively, and shows its coherence; 'I fondamenti della fisica e la teoria delle cause in Plutarco', shows how Plutarch subordinates the Aristotelian four causes to two Platonic ones (from the Timaeus), the 'divine' and the 'human'; 'Platone e Aristotele nella tradizione pitagorica secondo Plutarco' introduces important modifications into the conception of Plutarch as broadly pro-Aristotelian; 'L'eredità academica e i fondamenti del platonismo in Plutarco' argues for acknowledging the sceptical, New-Academic element in Plutarch's thought; 'Il De genio Socratis di Plutarco: I limiti del dogmatismo e quelli dello "scetticismo"' (previously unpublished) explores Plutarch's concept of 'true Platonist' and the complexities thereof.

The next paper, 'La connaissance de dieu et la hierarchie divine chez Albinos', turns to Alcinous (as he is now known), and the remarkable theology of chapter X of his Didaskalikos, of which he gives a most useful analysis; and finally, in 'Sokrates und sein Dämon im Platonismus des 1. und 2. Jahrhunderts n.Chr.', he meditates on the significance of the treatment of Socrates' daimon in the second-century 'Pythagoreanizing' of the philosopher.

All in all, a most valuable collection of essays from a major authority on later Platonism and Aristotelianism.