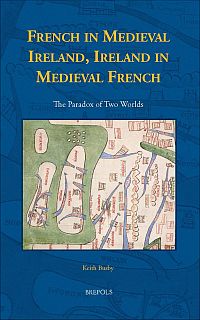 The subject of this book extends from before the arrival in 1169 of the Anglo-Normans till the middle of the 14th century. It shows the contrast between the real world that the colonists encountered and the imaginary Ireland of marvels represented in French literature.

The study opens with an analysis of the impact of the multilingual situation in Ireland and the progressive promotion of the use of French. This change started in the monastic context with the foundation of the Cistercian monastery of Mellifont in 1142 which brought French monks and consequently cultural clashes. In 1228, the investigator Stephen Lexington offered as a solution that "Latin and French are the language of polite intercourse and confession" (17) and suggested sending Irish monks to Paris and Oxford to learn proper French and Latin. The association of language and ethnicity may certainly have promoted French, when one considers the attitude and opinions of Giraldus Cambrensis who was expecting the Irish to learn French, and Roger Bacon who raised "the notion of the 'purity' of French [...] and the pre-eminence of the French of Paris and the Ile-de-France" (29). This multilingual situation called for interpreters who not only had an important role in legal and diplomatic situations and as messengers but also were transmitters of knowledge from a culture to another. French may have been the language of communication alongside other vernaculars in daily intercourse but was spoken by merchants and traders before the invasion. By the middle of the 13th century French is found in charters, in legal proceedings and on the tombstones of the colonists in Kilkenny and New Ross; it was still used on tombstones in Youghal until the 14th century.

The interest in literature of the new aristocracy and monastic communities in Ireland appears in quite a number of texts. Some are of historical interest like the story of the Norman conquest La Geste des Engleis en Yrlande (c. 1189) and often compared to a story on the same topic, that is the Expugnatio Hibernica by Giraldus Cambrensis. Another text is the Walling of New Ross, written to commemorate the foundation in 1265 of a wall around that town, celebrating its tradespeople and expressing a rivalry with Waterford and a certain antagonism towards the Irish. The romance of Horn by Thomas also offers parallels between historical events of 1169-1171. The Histoire de Guillaume le Marechal (c. 1147-1219), finished in 1226, gives an insight into the world of the Marshal family and also into the historical and political context after the arrival of the colonists. The list of library books of the earls of Kildare in Latin, French, English and Irish shows the multilingual and wide range of interest of the colonists. Another attraction to literature appears in Jofroi of Waterford's translation and adaptation - with the collaboration of the Walloon, Servais Copale - of the De excidio Troiae, the Breviarum historiae romanae and the Secretum secretorum. Busby's opinion is that Jofroi and Servais met and worked not in Paris as has been assumed but in Waterford.

Ireland as an isle of marvels, giants and monsters existed before the conquest because of its situation on the edge of the world mirroring that of the exotic Orient (as appears in the De rebus in Oriente mirabilibus) and also due to the transmission by the Irish monastic community of secular marvels in mythology, legendary history and Christian tales. Nennius' Historia Britonum (c.826) mentions Arthur's military conquests and death, two Arthurian marvels and two Irish mirabilia. The De mirabilibus Hibernie (before 1074) by bishop Patrick of Dublin contains twenty marvels. Some of these wonders have echoes in Chretien de Troyes' Yvain, Marie de France's lai of Bisclavret, the anonymous lai of Melion, and La mule sans frein. However the best-known Irish marvels are found in the second part of Giraldus Cambrensis' Topographia Hibernica (1187-1189). In the context of his belief that Ireland was part of Henry's domains since the time of Merlin and Arthur, the mirabilia through their description of Irish association with bestial proclivities and monstrosity tended to justify colonization as nature had to be "reined in and tamed" (221) and Irish laws concerning marriage practices eradicated. The notion of wondrous Ireland is also related to miraculous adventure and spiritual quest which is found in the Navigatio sancti Brendani written in the 8th century - perhaps in Lotharingia - and translated into Anglo-Norman by Benedeit at the beginning of the 12th century; in the Visio Tnugdali written by Marcus in Regensburg in 1149, first quite known in Germany and translated into French two centuries later; and in the Tractatus de Purgatorio sancti Patricii - written in England c.1185 - and very soon translated into Anglo-Norman by Marie de France (1190). Finally, many miracles are found in the Life and Miracles of St Modewnna, an Irish saint whose life in Latin (c.1135-1151) was adapted into Anglo-Norman before 1230.

Ireland, isle of wonders, became part of the romance world in the langue d'oïl. This opens the discussion of Chretien de Troyes's Erec et Enide (c.1170), the first Arthurian romance with shows Chretien's awareness of links between England, Wales and Ireland and with the first stage of the colonization of Ireland, as the episode of Guivret le Petit would suggest. Guivret reappears in Renaud de Bâgé's Le bel inconnu (c.1200) as an Irish king who brought a contingent of Irish to the tournament where there were two other Irish kings. A number of anonymous and Marie de France's lais are related to Arthurian romance. But it is the anonymous lai of Melion, the tale of an Arthurian knight who had the magic power to become a werewolf and was condemned to remain one by is Irish wife, which has the closest association with Ireland, in particular Dublin and its surrounding mountains. In Durmart Le Gallois (c. 1240) and Les Merveilles de Rigomer (1275-1300), the last Arthurian romances in the tradition of Chretien de Troyes, the action is situated in Ireland. The topography and geo-political context suggest that the two authors had a good knowledge of the country. Ireland and its marvels are present on a minor scale in many other texts including Non-Arthurian and Anglo-Norman romances.

The obtaining of land, wealth and status were certainly the initial reasons for intermarriage between the colonists and the daughters of native kings. But the colonists integrated so well into the new society that the English became worried that their culture and identity would become lost. This appears clearly in the Statutes of Kilkenny (1366), which forbade marriage not only between the native Irish and the native English but also not a few Irish customs. In many romances, the theme of the 'Irish princess' starting with king Mark of Cornwall and Iseut of Ireland and the love triangle problem with Tristan expresses the continuing interest of the colonists. "The striking point about both the major early verse Tristan texts and their subsequent elaboration in prose romance, is the manner in which the Irish provenance and ethnicity of characters and location of major narratives in Ireland become recurrent and defining motifs" (339). The Irish origin of Iseut was recognized in Dublin in a 1216 document referring to Chapelizod, now a Dublin suburb. By the middle of the 13th century, Tristan material was incorporated into the Arthurian world of the prose romances in which the role of Ireland as a land of wonders may be less important but still present, like the stones of Stonehenge coming from Ireland with the help of Merlin and the Grail now being associated with Ireland. According to Busby "as long as French remained an important language and medium in Ireland, alongside the reflected geopolitical concerns of the colonists in Ireland and their backers in England and France, the isle of marvels provided the necessary otherness in the world of romance" (421).

This is a most interesting book. Although its subject matter has been dealt with many times before, the exceptional quality of Keith Busby's approach is that both of these themes studied from different angles have been reassembled with an enormous amount of information. The work appears more like an encyclopaedia which will certainly be useful for decades.