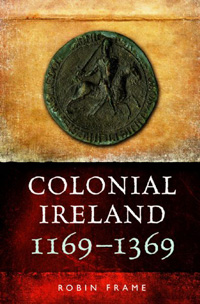 In this second edition, Robin Frame has refreshed the work first published in 1981 by a number of corrections and additions including a new introduction, a postscript, more maps and tables of lineage plus some thirty reproductions of manuscript pages, effigies, plans of towns, sites of monasteries and castles. He has also updated his commentated bibliography for further reading.

The author defends the idea of a 'real' conquest of Ireland in spite of the fact that the Anglo-Normans answering the call of Diarmaid Mac Murrough, the dispossessed king of Leinster, were invited and that the 'real' conquest of Ireland was achieved only in 1603. He describes the slow progress of this invasion, starting with the arrival of small groups from the marches of Wales, and followed by more invaders with and after the intervention of king Henry II who became worried about the new power of Richard de Clare (Strongbow) to whom Diarmaid Mac Murrough gave the hand in marriage of his daughter and the kingdom of Leinster. He underlines the importance and consequences of the ancestry, kinship connections and criss-cross alliances between these invaders. However, he does not mention that Strongbow's maternal grand-mother, Isabelle de Vermandois, was the grand-daughter of king Henri I of France. [1] It is therefore no wonder that Henry II was concerned that Strongbow's new acquisitions might induce him to break away from royal control. Similar situations occurred with the expansion of the territories of Hugh de Lacy and John de Courcy. So Henry II not only made sure "that Anglo-Norman gains were held of him, and on his terms" (23), but also that nobody would escape his power.

While Ireland may not have been a priority for the English kings who were more preoccupied with holding their lands in France, they made sure to keep control. However the general colonization of Ireland was very fragmented and somewhat unstable because of friction and rivalry between leaders, strained relations between the newcomers and the natives, resurgence of the Irish, and royal authority without a uniform and an equal strength. The lordship of Ireland was not helped by external circumstances such as the famine of 1315-1317, the Bruce invasion, the Black Death of 1348-1349 and the long series of Anglo-French conflicts.

Settlement was therefore scattered geographically and appears as a complex mixture of political and social change. It introduced "a new, more regular and stable hierarchy of authority" (86), a reorganization of rural life to suit the newcomers, a use of arable lands through the planting of English and Welsh cultivators, the development of old fortifications, building of castles and construction of strong points. "The apportioning of land to lords' kinsmen, followers and associates" (91) helped the Anglo-Norman lords to retain their control; as the division and subdivision of the land very often followed old territorial divisions, continuity was somehow maintained. This period saw also the growth of towns in parallel with the immigration of merchants, tradesmen and artisans into the major urban centres, and Dublin became the heart of "a small but influential ministerial establishment" (107).

The slow process and simultaneous 'success' of this invasion had its origin in the fact that Ireland not only was not a united kingdom under a national monarch but was moreover divided by internal struggles due in part to the absence of primogeniture. This lack of national co-ordination downsized the effort of the Gaelic lords to resist the invaders, but their strong national consciousness was "expressed in language, custom and dress" (61) and preserved by their historians and poets. On the one hand it contributed to the unofficial recognition of Irish law and on the other facilitated the imposition of English law and administration.

However, the two cultures mingled. The Irish continued to live according their own customs and also adopted part of the other culture. The Anglo-Normans may have tended to replicate their own society but like ancient German and Norman invaders elsewhere they settled into their new possessions, using Gaelic chiefs as their allies, legitimizing their new possessions by adopting Irish saints, building castles and monastic foundations and creating alliances by marrying the daughters of the Gaelic kings. This developed a kind of contradictory society: while the Gaelic leaders were not fully integrated into the crown lordship of Ireland, they were nevertheless associated with the English. And when later the English of Ireland called upon England for assistance against the Irish who threatened to overwhelm them "they were discovered in close and often harmonious relations with that enemy" (153). But in 1366 the Statute of Kilkenny was introduced "to preserve the Englishness of the settler population by excluding the Gaelic influences that seemed to threaten it" (150f.).

Robin Frame generally adopts a wide approach intellectually and internationally which makes his book very interesting. He justifies the action of Diarmait Mac Murrough (often considered as a traitor) through Irish international links and interprets the harsh judgments of the Anglo-Normans who considered Gaelic society as barbaric. Already from the XIth century onwards the ecclesiastical reformers tried to modify their laws by bringing the church and its organization into line with Rome [2], which explains why the Church supported the invaders. The introduction of law and institutions in Ireland in harmony with a European trend is also compared with the same situation in Wales and Scotland. Similarly he analyses the different interventions of the kings of England from an international point of view and concludes that "understanding is better served by considering why rulers thought and acted as they did, than by lamenting their failure to behave as we may think they ought to have done" (82). This non-judgmental approach is very appealing and the work as a whole is a fine study of the colonization of Ireland in all its complexity.