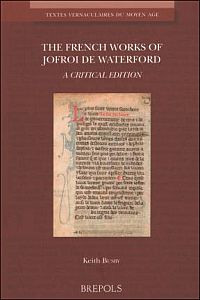 This edition makes available for the first time the complete oeuvre of Jofroi of Waterford, namely the Gerre de Troie, the Regne des Romains, and the Secré des secrés. The three texts are transmitted together in a single manuscript (Paris, BnF, fr. 1822), and were apparently conceived as a group. Busby situates Jofroi in the intellectual context of Waterford, Ireland at the turn of the fourteenth century. He has also unearthed new evidence about Jofroi's scribe and collaborator, Servais Copale, which identifies him as a wine merchant and customs official, originally from Liège, but attested in documents in Waterford in the first quarter of the fourteenth century. The language of the manuscript reflects this collaboration: the scribe's Walloon dialect overlies a distinct Hiberno-French substratum apparent in these texts, but not in the other (Continental) contents of the manuscript.

The General Introduction presents the translator, the manuscript, the linguistic features of the texts, a statement of editorial principles, and a bibliography. Each text is preceded by a brief introduction and followed by textual notes. The editor has provided an image of the opening manuscript page of each text (50, 92, 186), as well as of a fragment of a second copy of the Secré (306). The volume ends with a selective (but extensive) glossary, and an Index of Proper names, which is invaluable, given the plethora of names both historical and geographical in the three works.

The Gerre de Troie - with an author's prologue (there is none by the translator) and fifty-three chapters - is a literal translation of the De excidio Troiae by Dares Phrygius. In the following Notes, the editor indicates its departures from the source. These variations were perhaps due to the particularities of Jofroi's exemplar, and Busby suggests some possibilities.

In the Regne des romains, Jofroi's approach to Eutropius' Breviarium historiae romanae ab urbe condita was essentially similar, but his difficulties in comprehending Latin resulted in several confusing passages in French. The translation comprises ninety-six chapters divided into nine (rather than ten) books, and introduced by a brief prologue of his own composition. The Notes include information on the editions of the source text, but due to the great number of manuscripts and the selectivity of the recorded variants, Busby was unable to determine what kind of exemplar Jofroi might have employed. Nevertheless, departures from the source - through addition, omission, or mistranslation - are carefully indicated.

The Secré des secrés differs from its companion pieces in several ways. According to Jofroi's prologue, it was undertaken at the request of an (unnamed) patron, and he allowed himself considerable liberty in dealing with his source. In his prologue, as well as elsewhere in the Secré, he announced his intention of correcting its errors, re-ordering its material, shortening what was too long and supplementing what was too short. The result is an adaptation, rather than a translation, of Philip of Tripoli's (long) Latin translation of the Pseudo-Aristotelian Secretum secretorum. Jofroi's two hundred and twenty-eight chapters (plus a translator's prologue and epilogue) are a faithful rendering of only half of the original. For the chapters on cosmology, astrology and magic, he substituted most of the Pseudo-Aristotelian Physiognomica, and extracts from the Liber de conservanda sanitate of Petrus Hispanus, and from the Liber de dietis universalibus et particularibus. The resulting compilation is structured in three parts: a mirror of princes, the regimes of physical health, and the composition of the prince's entourage. Busby was unable to be very precise in his textual commentary on the Secré because most of Jofroi's sources are unavailable in critical edition, but he has carefully indicated the shifts from one source to another. The fact that there are two Middle English adaptations of Jofroi's Secré des secrés (by John Gower and James Yonge) will broaden the potential audience for this excellent edition.

The three works presented in this edition were conceived as a single project. In addition to the epilogue that announces its completion, the Secré alludes to both of the earlier works in the group. The series allows the reader to trace Jofroi's intellectual evolution. The somewhat slavish translator of the Gerre and the Regne emerged in the Secré des Secrés as a confident scholar with broad knowledge of Latin texts and access to a good library. He demonstrated considerable skill in incorporating material from diverse sources at the appropriate points into his translation.

The edition is generally conservative, with correction of errors based on the Latin sources. Scribal indications of divisions within the text - rubrics, flourished initials, paraph marks - are represented typographically in the edition, although the medieval punctuation is not reproduced. The editor's goal was a readable and comprehensible text, and in this he has succeeded admirably. This volume makes a significant contribution to the published corpus of Anglo-Norman literature and will also appeal to scholars with an interest in the intellectual life of medieval Ireland, in the transmission of classical learning, in medieval translation practices, and in the encyclopaedic tradition.