Uri Zvi Shachar: A Pious Belligerence. Dialogical Warfare and the Rhetoric of Righteousness in the Crusading Near East, Philadelphia, PA: University of Pennsylvania Press 2021

Albrecht Classen (ed.): Death in the Middle Ages and Early Modern Times. The Material and spiritual Conditions of the Culture of Death, Berlin: de Gruyter 2016 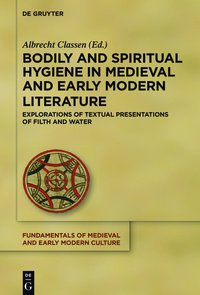 In this volume, Albrecht Classen busts the myth of a "dirty" Middle Ages disinterested in bathing, cleanliness, and hygiene. Medieval and early modern peoples were not only interested in but also practitioners of healthy and hygienic practices, many of which are familiar today. Yet despite the many books, including my own volume on excrement in the Middle Ages, attesting to the importance of sanitation in medieval and early modern medical care and well-being, it seems we need ever more scholarship to convince a vast public that, yes, people in the past were in fact concerned with clean water, sanitary living conditions, and medical hygiene.

As Classen points out, the essays focus "on hygienic, medical, and physiological aspects as reflected in literary, didactic, religious texts, but then also in medical treatises" (3). Inevitably, Classen cites Mary Douglas, whose work has proved foundational for practitioners of Waste Studies. Classen's introduction frames the subsequent essays by laying out a view of the field, with a particular emphasis on water as one link among them.

He reads dirt "as a cultural entity" (9) which leads to a brief history of bathing and the example of Saint Elisabeth / Elizabeth of Thuringia / Hungary and the development of the medieval hospital. Other texts, such as those by Der Stricker and Marguerite de Navarre, or featuring Till Eulenspiegel, provide swift but instructive examples of ways in which dirt has been written about and viewed. We are reminded of the tension between literary and historical texts and, in his summation of the volume, Classen textures the contributors' essays with further sources for the reader.

Works explored throughout this volume span languages and cultures throughout western Europe, from the Old English Bald's Leechbook to early modern Bohemian treatises. The glue among them stems from the thematic as stated in the title: bodily and spiritual hygiene. Whether it is Warren Tormey unpacking the fusion of pagan and Christian in Anglo-Saxon England or Jean Jost's careful analysis of water in Middle English romance, all these essays take an interest in purity, health, and cleanliness - along with its natural opposite dirt, here seen in a more nuanced way as a necessary element in ecocritical sustainability (8). As wide ranging as monastic and religious writings (Debra L. Stoudt, James L. Smith, Belle S. Tuten) and medical treatises, Classen's volume advances our understanding of attitudes to health and cleanliness.

Generally, the essays look at religion and health, monasteries, leprosy, allegory, medical treatises, romances and liquids, bathing, emotions, "practical medical, hygienic, and nutritional aspects correlated to water" (73), and related topics. Literary works have genre expectations - with heroic poetry unlikely to address issues such as defecation, while romance as a genre seems particularly prone to mentions of water and other liquids (blood and oil; see Rosa A. Perez, Christopher R. Clason, and Jost). Even monastic architecture (Tuten) teaches us about medieval habits of bathing and hygiene. A closer view of just a few essays give a flavor of the fascinating insights to be gleaned from this excellent volume.

Fabian Alfie's well-researched article with sources applied to two texts not often studied - late medieval Italian sonnets about women marrying late in life - includes a helpful appendix with poems in the original and translations one could use in the classroom. Additionally, his commentary on the "cultural and historical" (403) perspectives of filth and dirt are subtle. Erin S. Lynch's application of neurobehavioral research on lepers and the spatial barriers and segregation they suffered is hugely innovative. For Lynch, stereotypes of asocial behavior adhering to lepers as being full of rage could have a basis in being denied personal touch - whether due to deteriorated nerve endings and / or to restrictions on touch. Blending modern medical and psychological research with archival material convincingly shows how the leper's marginalization not only reflects, but exacerbates, various aspects of the illness.

Anne Scott's wide-ranging essay into "Aqueous Presentations of Emotional Experience" links emotion to experiences with water, whether literal or metaphorical. Yoking emotions to "moral agency" (357) contributes, she argues, to an emotionally charged experience for the reader, deepening our moral investment with the characters. From Beowulf and Icelandic saga to Shakespeare and Donne, water serves to engage the reader with the humanity of the figures in a literary work.

As Classen argues, the "notion of the 'dark Middle Ages' thus proves to be rather absurd and misleading" (79). While this myth has been busted numerous times as is clear from the copious material noted by the contributors, it evidently still needs saying. This collection of essays sometimes strays from a narrowly defined stated purpose; some of the essays barely mention water or the concept of filth as stated in the title, at least not directly. Yet, taken broadly, the volume holds together nicely and is replete with intriguing details, from the dog as preacher (Cynthia White 239-40) to cat remedies, whether its piss or roasted into a powder (Chiara Benati 515).

This volume contributes a wealth of perceptive essays devoted to the ongoing development of studies into the nature of health and hygiene in the medieval and early modern periods and could be used to show how theoretical approaches can be useful for deepening our understanding of the past. These include Gender Studies (Daniel F. Pigg; Alfie); Disability Studies (implied in the medically-focused essays, especially Lynch); the History of Emotions (Scott; Lynch); Ecocriticism (David Tomíček and implicit in, for example, Scott L. Taylor on the English common law of nuisance); and Vibrant Materialism (water as agent in Clason 294 and Scott 361).

I am most grateful to those articles that include analyses of less studied texts, even including entire or partial translations (White; Alfie; Sarah Gordon; Tomíček; Benati; Thomas G. Benedek); teach about a seventeenth-century woman chemist (Thomas Willard); and introduce the concept of the text and rhetoric themselves as remedial (White). Happily, for those of us in this field and our young colleagues, these essays demonstrate how much work there still exists to be undertaken in this field. "Modern research still has to uncover countless archives and probe the true discourse on those personal issues, including sickness, the use of the toilet, bathing, medicine, and typical problems of getting old" (Classen 80).