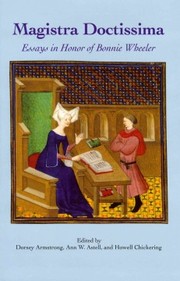 The Introduction to this volume invokes Christine de Pizan's celebration of multiple women who "have instructed others by word and example" (1). What better comparison to make than this to Bonnie Wheeler, truly a magistra doctissima (master teacher/mentor), whose tireless support of countless colleagues and students transformed their lives? Her research likewise has fundamentally changed the nature of medieval studies, particularly her spearheading "The New Middle Ages series" at Palgrave Macmillan with its "daring new approaches to familiar subjects" (3). And she has functioned as a wise and inspirational leader on numerous organizations, including as the founding chair of the committee that became TEAMS (Teaching Medieval Studies) and as a councillor of the Medieval Academy of America. The editors of this volume rightly point to Wheeler's generous dedication to "teamwork" and "outreach" (2) as characteristics of her work, such as lecturing for The Teaching Company, and consulting for television networks and cable stations on behalf of the general public.

Her research innovations are reflected in the fine essays collected in this volume, affectionately dedicated to Wheeler. Thorough and sparkling, they reflect of Wheeler's own stellar scholarship. Wisely, the editors have divided up their contributions according to the main arcs of Wheeler's scholarly production, starting with Old and Middle English literature.

Toshiyuki Takamiya's essay on a translation of Grendel's Mother by Kiyoko Nagase in 1930 paints a fascinating picture of Old English studies in pre-World War II Japan. Jeffrey Jerome Cohen argues that Chaucer ignores or marginalizes "other" cultures in Britain, such as the "Scots, Irish, and Welsh" (25), privileging London in The Canterbury Tales. Lorraine Kochanske Stock's essay on Chaucer's "Hag" in The Wife of Bath's Tale ideally reflects Wheeler's feminist analyses of literature and culture, by tracing the myopia of critics in their referencing the "wyf" of the Tale as a "hag" - a word that never appears in the text. Stock succeeds in her mission: "to recuperate Chaucer's wife old 'wyf' in WBT" (35).

Stephen Stallcup's analysis of a crux line in The Knight's Tale references Boccaccio's source text. Manuscript analysis suggests that Arcite's horse is spooked by a "fire" not a "furie". Etymological detective work into the word "picchen/pighte" allows Stallcup to figure out a plausible mode of the knight's death.

The second part of the book shifts to essays focused on Arthuriana. As the "founder and longtime editor of Arthuriana" (2), many readers were first exposed to Wheeler's work in this field. Maurice Keen shows how Geoffrey of Monmouth's writing "was still proving useful for royal propaganda purposes in the 1530s" (68). Geoffrey Ashe likewise focuses on Geoffrey of Monmouth, whose Prophecies argued for and reflected a "widening conception of prophecy" (77). Alan Lupack fascinatingly traces the impact of Tennyson's poem "Sir Galahad" - particularly the lines "My strength is as the strength of ten,/ Because my heart is pure" - through popular culture in the Victorian and World War I periods, including in youth groups dedicated to modeling the heroic behavior of Arthurian knights. The article on "Googling the Grail" leaves the essay's reader (and writers) deflated at the capitalization on and rendering into "cultural garbage" (115) of the sacred dimensions of the Grail.

The crowning glory of this section lies in D. Thomas Hanks, Jr.'s brilliant analysis of Malory's prose style. By analyzing what seems obvious once Hanks points it out, the "oral-aural culture" of Malory's audience, Hanks suggests that Malory's use of coordinating conjunctions is not proof of a simple and crude style. Rather, it reflects the "syntax of a culture which had yet to invent our current form of punctuation" (82). Alliteration provides Malory with dramatic emphasis; repetition with variation permits a listening audience to better follow the plot.

The volume then turns to "Joan of Arc Then and Now, " a tip of the hat to Fresh Verdicts on Joan of Arc (1996), one of Wheeler's twelve co-edited volumes. Kelly DeVries reconsiders Joan of Arc's attack on Paris to suggest that Joan of Arc would have had a hard time capturing Paris even with the citizens' support. Kevin Harty's essay on "Screen Joan During World War I" reveals how Joan was coopted to encourage support of the war effort.

Nadia Margolis's article on left-wing Joans on the stage in the twentieth century allows us to see the multiple ways in which her tragic story resonates with highly disparate political actors: from Bertolt Brecht to Jean Anouilh to Lillian Hellman.

The fourth section of the volume, dedicated to Nuns and Spirituality, reminds us of Wheeler's longtime commitment to the study of religious women, in particular Heloise. [1] William Chester Jordan's work on the nuns of Bival traces the fortunes (literally) and misfortunes of the group of nuns at this Cistercian nunnery. The visitations of "the Franciscan archbishop of Rouen, Eudes Rigaud" (160) allows the historian to witness the scandals and intimate details (such as little chests containing personal belongings) of daily life. His work points out how "Bival was almost always on the brink of bankruptcy" (166), suggestive for work on comparable women's foundations.

Anne Bagnall Yardley's essay on the "Sonic Presence of Mary Magdalene at the Last Supper" innovates the use of musical resonance to reconstruct the reception of Mary Magdelene's importance to the imagination of nuns at Barking Abbey. The chants sung at the "mandatum, or footwashing" (169) echo the story of Mary Magdalene (conflated from several Marys in the Gospels).

Annemarie Weyl Carr's tour de force essay brilliantly argues for the Byzantine link to El Greco's The Disrobing of Christ (1577-79), tying it to the "icon known as ... Christ drawn to the Cross" (187). Christ's robe as flesh trope is then yoked to the sixteenth-century allegorized image contrasting Apollo (art) and the flayed Marsyas (nature). Ultimately Carr argues that El Greco's dramatic painting carries theological weight and a "message of transcendent artistic ambition" (193).

The last section of the book focuses on royal women, reflecting Wheeler's interest in queens as seen in her co-edited volume Eleanor of Aquitaine: Lord and Lady (2003). Constance of France stands at the center of William W. Clark's tribute to this remarkable woman whose donations to religious institutions countered "male attempts to hinder or even to close down a female institution" (210).

Elizabeth A. R. Brown's history of "The Testamentary Strategies of Jeanne d'Évreux" argues that Jeanne's donations to Saint-Denis successfully (for the most part) allowed her to properly commemorate her dead husband, Charles IV, herself, and daughters, laying the foundation for her legacy.

Unlike many a Festschrift in which the disparate pieces refuse to hang together into a coherent whole, each chapter ties into Wheeler's life, legacy, and research. Giles Constable's recovery, transcription, and translation of a letter from the "abbot of Clairvaux to the abbess of Fontevrault" (155) perfectly articulates what the writers of this volume attest to concerning Bonnie Wheeler through her work of outreach and editing: "You reform deformities, repair lapses, strengthen weaknesses, open what is closed, assemble what is dispersed, and illuminate what is dark" (157). Like the reliquary chasse given by Jeanne d'Évreux to Saint-Denis, this book contains phials of distilled wisdom dedicated to the largesse, bounty, and intellectual generosity of another "independent, spirited, and dynamic woman" (Clark, 211).

[1] See Wheeler's Listening to Heloise: The Voice of a Twelfth-Century Woman (2000), among other works, one forthcoming 2014.