Justin A. Stover (ed.): A New Work by Apuleius 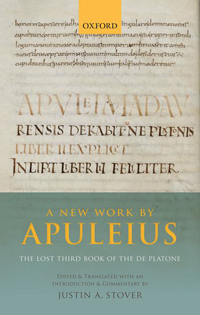 In 1949 Raymond Klibansky, a specialist in medieval and renaissance Neo-Platonism, announced his discovery of what he called Summarium librorum Platonis in a thirteenth-century Vatican manuscript. Klibansky never published his intended edition, and the present book is the first edition of this long-awaited work, which Stover has chosen to call the Compendiosa Expositio, or Expositio for short.

Stover's book consists of a long introduction in several chapters, followed by a text and translation and a detailed commentary. In an appendix, Coleman Connolly discusses the Islamic philosopher al-Farabi's partly similar Philosophy of Plato. There is an ample bibliography and general index, but no word-index, which might have been helpful.

The Expositio is a brief summary of several books of Plato, mutilated at beginning and end. It begins in the middle of the third book of the Republic and ends with the Critias. Most of it consists of indirect statements in the accusative and infinitive introduced by expressions such as ait, adfirmat and placet illi, with some indirect commands introduced by verbs like permittit or uetat, again with the infinitive.

The manuscript is corrupt, and Stover has had to emend it frequently to make it readable. His text and translation are very helpful, and the commentary pays full attention to the author's vocabulary, to verbal parallels in other writers such as Cicero, and to such philosophic ideas as he can be shown to have. Even so, not all will agree that the Expositio is "a brilliant work of scholarly polemic" (86).

Stover's title expresses his conviction that this is a new work by Apuleius. In the lengthy introduction he attempts to prove this by stemmatic considerations, by style, and by affinities with undisputed works of Apuleius. Three questions immediately arise. What sort of work is this? Who is the author? And what is the date?

The first question is fairly straightforward. As Stover notes, the Expositio resembles other compendia of Plato such as Alcinous' Handbook of Platonism. [1] But unlike Klibansky, he considers the work not to be an independent compendium, but "the lost third book of [Apuleius'] De Platone." When he comes to presenting his arguments in detail, his views are rather less positive, and rather more varied. The work "creates an index of Platonic loci" (63). It also aims "to introduce Latin readers to the doctrines of some of Plato's dialogues" (84). "Apuleius himself reworked his own reading notes from Plato ... as the third book of the De Platone [though] it is possible that one of his students in North Africa worked up the unconnected notes that his master had left behind into a Latin summary of Plato's dialogues" (88). But these more qualified positions call into question the bold claim that this is a "work by Apuleius" or part of the De Platone: at best, it would be a series of notes on Plato possibly made by Apuleius.

There are other problems. The theory that the De Platone lacks a third book is due to Apuleius' statement in the first book, "Since Plato first established that the three parts of philosophy were interconnected, I too will speak separately about each, making my starting-point natural philosophy" (quoniam tres partes philosophiae congruere inter se primus obtinuit, nos quoque separatim dicemus de singulis, a naturali philosophia facientes exordium, De Pl. 1.4). The second book treats duly Plato's moral philosophy. Many have concluded that Apuleius intended the completed work to consist of three books, one on nature broadly construed, one on morals, and one on logic, rather as Alcinous' Handbook divides Platonic doctrine into logic, physics, and ethics; hence, it is inferred, Apuleius intended the third book to be on logic, but either he failed to write it or it was lost in transmission. Thus the reason for postulating a third book was that it was meant to discuss Platonic logic, and yet this supposed third book does nothing of the sort.

More fundamental is the question of Apuleian authorship, which Stover argues on several grounds. The Vatican manuscript (R) contains the philosophica commonly ascribed to Apuleius, some of them falsely, and after the spurious De mundo passes straight to the (mutilated) beginning of the Expositio. A slightly later manuscript in Venice, also containing the philosophica (Z), follows the De mundo with some phrases of the Expositio that in turn are followed by EXPLICIT APULEIUS DE DOGMATE PLATONIS LIBER TERTIUS. Hence a further problem: the primary witness to the Expositio does not attach it to the De Platone but to the De mundo. Since Z appears to be a copy of R, the crucial question is the position of R within the tradition of the philosophica. The stemma is usually thought bipartite, with two branches, α and δ. Stover argues that R shares good readings with both branches, and has some superior readings which show it to be independent of both; hence it is the sole representative of a third branch, which alone preserves this lost work. His examples of R's superior readings do not convince. Thus at De deo Socratis 6,3, the manuscripts have hos Graeci nomine daemonas nuncupant, inter caelicolasque uectores. Two manuscripts contain the universally accepted conjecture inter <terricolas> caelicolasque, whereas R has inter <homines> caelicolasque. Stover thinks terricolas "condemned" on the ground that "it does not appear until at least the sixth century," and believes homines to be the original reading (16). Yet in his commentary, he notes that the Expositio's inperceptibilis is "not attested into well into the Middle Ages" (155) and that inpartibilis "is only found in Christian theological contexts of the fourth century and later" (179).

Another of Stover's criteria is "style," by which he means principally word-choice and rhythm. Though he discusses choices that might show a connection with the De Platone, he does not seem to consider those that imply the lack of one. Among the words that the Expositio uses to introduce indirect speech, placet illi, which occurs at least 25 times, does not occur in the De Platone. As already observed, certain compounds appear only after the second century, principally in Christian authors. A striking rarity is causidico (25.7) in the sense of "indict". This word is absent from dictionaries of classical Latin, but the Mittellateinisches Wörterbuch bis zum ausgehenden 13. Jahrhundert (2, 411) glosses it as beschuldigen, with a citation from the year 1152. Another oddity is ab his meaning "after this," "next," in transitions to new topics (3 times), though it might be justified by ab in the classical sense of "next to, following on" (OLD ab 13). Could the Expositio be medieval, even close in date to the date of R?

But style is more than word-choice or rhythm. Granted that Apuleius' style varies, still no one could mistake the style of the Expositio for that of Apuleius; it has no style at all. That might be justified on the ground that it consists of his notes, possibly "written up" by someone else, and therefore cannot be measured against his normal style. But if it cannot, then how can style be used to prove it a work of Apuleius?

In short, the author deserves thanks for a careful and learned first edition of a new compendium of Plato. But he has not given us a lost work of Apuleius.