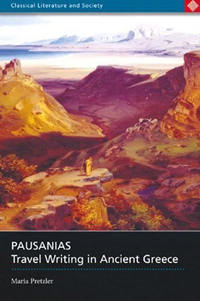 The "'Pausanias boom' of the late nineteenth century," to use Maria Pretzler's phrase (125), with its series of important books on the author and the two major commentaries of Hitzig-Blümner and of Frazer, has its analog just about a century later. Just as the first boom took fire from Wilamowitz' attack on Pausanias in his "Thucydideslegende" of 1877, so also the present one owes its origin in large part to Christian Habicht's Sather lectures published in 1985. [1] Like the first, the present boom has also produced two important commentaries, both now well advanced, from Mondadori in Italy and from the Presses Universitaires de France.

Pretzler's book, coming after several predecessors of which William Hutton's Describing Greece is the most recent [2], might seem superfluous. In fact, despite its modest claims and moderate length, it is very welcome. The first chapters take the reader through most of the familiar questions, asking who Pausanias was, whether the work survives complete, how much he relies on written sources and how much on interrogation of contemporaries, and so on. But these chapters are full of fresh and interesting insights. For example, Pretzler rightly insists that, though Pausanias reads the Greece of his own day in relation to the past, it is not only the past of the classical period, but also the Hellenistic and the Roman pasts when a place or a monument evokes them: Attica in fact is more evocative of these recent pasts than other regions. Similarly, Pausanias' description of a site such as Tegea gives little impression of its appearance, but is formed by the myths and history that the monuments evoked for him (95-99).

Interest in the Second Sophistic and the pepaideumenoi of the first three centuries CE has continued to flourish in the forty years since Glen Bowersock's pioneering Greek Sophists in the Roman Empire. [3] Whereas Habicht had seen Pausanias as a kind of anti-sophist, a quiet, studious researcher shunning the flashy exhibitionism of a Polemo or a Herodes Atticus, Pretzler is more inclined to emphasize the similarities: an interest in exotic travel (Aristides), in curiosities of the natural world (Aelian), in art and architecture (Lucian). But perhaps these similarities reflect the cultural atmosphere of the age, not just of the Second Sophistic, of which Lucian is at best a "corresponding member." Plutarch had no patience for sophists, and yet the only monuments (as opposed to customs) that he comments on in the Roman Questions are in Rome, and evidently reflect his own experience of the city. He can sound very like Pausanias: "Why do they sell equipment for funerals in the sanctuary of Libitina?" (269A-B), "Why do they use the temple of Cronos as a treasury for the public moneys, and also as an archive for contracts?" (275 A).

The most original chapters of Pretzler's book are the last two: "Pausanias and his Readers" (ch. 9) and "Discovering Greece with Pausanias" (ch. 10). Here she follows the Nachleben of Pausanias from the fifteenth century through the twentieth. One manuscript, the archetype of all the surviving ones, reached Italy soon after 1400. Demetrios Chalcondyles, the influential teacher and printer of Greek literature in the later fifteenth century, is said to have known Pausanias by heart, though Musurus produced the first printed edition only in 1516 (119). The early eighteenth-century antiquarian, Caylus, bases his classification of ancient art largely on Pausanias (121-122). Influenced by Caylus, Winckelmann develops his approach to ancient art under the guidance of the Periegesis, which he knew intimately (122-123). In order to write his great commentary, Frazer is led not only to explore Greece in depth but to collect anthropological data from other cultures that inspire The Golden Bough (125-128).

In so well-informed a book, one misses a discussion of the very important article of Denis Knoepfler. [4] Knoepfler begins from an inscription of Lower Moesia that shows bisons being captured for display at the Secular Games of 148. Hence, so he argues, Pausanias probably saw these creatures at Rome (9.21.2) in that very year. Since his reminiscences of Rome are mainly about exotic animals and other curiosities, not works of art, he had yet to develop the interests that he was to gain on his tour of Greece, so that he should only have begun writing about 150 at the earliest (art. cit. 508). In her discussion of this question (23-24), Pretzler is sceptical of the Hadrianic date proposed for the early books by Domenico Musti [5], but is more sympathetic to Ewen Bowie's suggestion of a date about 165 for the publication of Book I. [6]

Another subject on which a reader might wish for more is that of Pausanias' viewpoint as a stranger to Old Greece from the flourishing west coast of provincia Asia. As one born and probably resident in Magnesia by Sipylos, he was little more than a day's journey from Smyrna and not much further from Pergamum, where he had access to one of the greatest libraries of the day. The Periegesis begins with the viewpoint of one arriving by sea from Asia through the Cyclades, whose first impression is of the promontory of Sounion and the gleaming temple on its summit (which Pausanias mistakenly identifies as a temple of Athena): Pretzler (143) well compares the very similar impressions of Edward Dodwell arriving from the opposite direction in 1801, where again an outsider viewer feels both a nearness to, and a distance from, the Greece before his eyes. "Post-colonial" literature does not always make a profitable comparison with ancient, but here it might. Pausanias is very conscious that the Peloponnese, to which he devotes the bulk of his Periegesis, was colonized from his region, which still displayed the "Throne of Pelops." The wretched state of Panopeus in Daulis (10.4.1-2: Pretzler 91) may have presented him with a sight almost unthinkable even in the middling cities of his own region, into which sophists and other benefactors, often by their influence with emperors, had drawn so much recent wealth. It is a shame that he never got to describing Naryka in Locris, like Panopeus a shrunken city clinging to the shreds of its mythical past, as a recently published letter of Hadrian (SEG 51 [2001] 641) has revealed. Though the Periegesis is not a guide-book or a journal of the Grand Tour, it has an element of autobiography that remains to be explored.

This is an excellent guide to Pausanias, both a reliable introduction to old questions and (especially in its last chapters) refreshingly new.

[2] William Hutton: Describing Greece. Landscape and Literature in the Periegesis of Pausanias, Cambridge 2005.