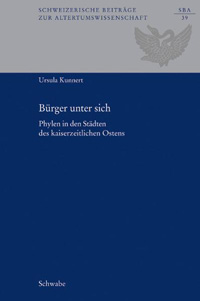 The Greek word phylê, as its name implies, originally denoted a kinship-group. With the rise of the Greek polis, the phylê becomes a unit of civic organization, best known from classical Athens. As new cities came into being in the Hellenistic period and later, they continued to use the phylê as part of their machinery, but wide separation in space, time and political circumstances inevitably led to divergences of form. A phylê in Palmyra looked very different from one in old Greece or even in western Asia Minor.

Ursula Kunnert's book is the revised version of a dissertation presented at the University of Zürich in 2007. The last synthesis of knowledge about the phylai was by Nicholas F. Jones (Public Organization in Ancient Greece, Philadelphia, 1987). Kunnert acknowledges her debt to Jones' book, but goes far beyond it in space and time. Jones included Asia Minor in his scope but, as his title suggests, he did so from the viewpoint of mainland Greece in its heyday, treating "the western seaboard" and "the Hellenized interior" in his last two chapters, and even here rarely descending beyond the Hellenistic period. From this position, it is not surprising that he saw later developments as signs of "the erosion of the public unit qua association" (297), "a general collapse" (347). One of the strengths of Kunnert's book is to treat the phylê as an adaptable unit, with no necessary coherence between its far-flung manifestations, and responding to the needs of cities and their founders according to place and time.

Like Jones, Kunnert looks eastwards, but her standpoint is imperial Rome, and her field of vision is the "kaiserzeitliche Osten". In her first three chapters (1-36), in order to prepare the ground, she justifies her geographical scope, reviews the nature of the sources (almost all inscriptions and papyri), gives a brief history of scholarship on the subject, and (in the third and longest of these introductory chapters, 19-36) examines the tricky subject of terminology. Here she distinguishes the phylê as a civic unit from other applications; it can for instance denote a religious grouping equivalent to a religious thiasos or a kinship-group in the full sense. The central chapter (IV, 37-216), occupying about half the book, gives a detailed review of all the civic phylai from Macedonia to Egypt. (Kunnert omits Achaea, presumably because it had been thoroughly covered by Jones, but since it was so closely connected with Macedonia a word of explanation would have been welcome.) The next three chapters (V-VII, 217-302) treat the phylai globally, by organization (V), internal activities (VI), and functions within the larger structure of the city (VII). There is inevitably some overlap between these chapters and with Chapter IV. After a brief summary (303-305), appendices set out some topics of the book in the form of tables, for example the tribes of Alexandria (306-333). The book ends with a bibliography and very full indexes.

Kunnert's collection and discussion of evidence is thorough and up-to-date, and new discoveries may amplify, but are not likely to alter, her general conclusions. The ongoing excavations of the stadium of Magnesia on the Maeander show seats being reserved for a large number of groups, including clients of a wealthy citizen, but so far have not yielded any mention of phylai (B. Dreyer in A Festschrift for Orhan Bingöl on his 67th Birthday, Ankara 2013, 117-132); this reinforces Kunnert's observation (118-119) that only a single inscription of Magnesia mentions the phylai as still existing in the second century CE. An inscription of Ancyra discussed by Kunnert (268, 283 n. 1105) is now no. 124 in David French and Stephen Mitchell, The Greek and Latin Inscriptions of Ancyra, which appeared too late for her to see. Here the phylê Marouragênê honors Silvanus son of Helios as φ[ύλ]αρχον πρῶτο[ν τει]μηθέντα [ὑπ]ὸ φυλῆ[ς] (lines 2-3) and τὸν ἑαυτῆς πατέρα καὶ προή[γορ]/ον (?) τιμηθέντα ἀνδριάσιν καὶ εἰκόσιν (lines 7-10). Kunnert rejects προή[γορ]/ον, proposed by Walter Ameling (ZPE 60, 1985, 44) and accepted by the new editors, in favor of W. M. Ramsay's πρό[γον]ον or Sviatoslav Dmitriev's πρό[τερ]ον. According to Ramsay (BCH 7, 1883, 19), J. H. Mordtmann's copy had ΠΡΟΤ at the end of line 7 and ΟΝ at the beginning of line 8. French and Mitchell for the first time provide a photograph, which shows that Mordtmann's copy was fairly accurate. The true reading seems either to be πρῶ/[τ]ον or (though it offends the rule of syllabic division) πρῶ[τ]/ον, repeating the phrase πρῶτον τειμηθέντα ὑπὸ φυλῆς in lines 2-3. If this is correct, Kunnert was right to reject προή[γορ]ον, and was wrong only her choice of solutions.

In short, this is an excellent book, well-informed and judicious. Rather than seeing changes in the application of the Greek tribal system to new places and to later times as a decline, it sees them as part of a continuous development that in some places continued until Late Antiquity. In this respect the book takes a position comparable to Simon Price's classic Rituals and Power: The Roman Imperial Cult in Asia Minor. Kunnert understands the Greek east of the imperial period as having a color and a dynamic of its own, a New World of Hellenism.