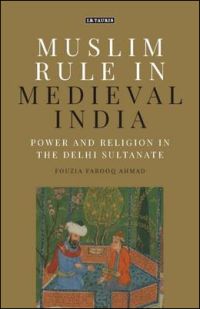 Fouzia Farooq Ahmed's study, which is based on her dissertation submitted to the Quaid-i-Azam University, Islamabad, Pakistan, deals with the first independent Muslim rule on the Indian subcontinent, the Sultanate of Delhi (1206-1526). As a "classical" political history, it focuses on politico-military events and the relationship between the sultans, their bureaucracy, and the ruled.

Ahmed's objective is to rationalize the oscillation of the "state structure" from temporary stability to recurring spells of instability (XI). Assuming that the Delhi Sultanate is generally perceived as an exceptionally centralized political structure (1), Ahmed argues the contrary, maintaining that the Delhi Sultanate was simply not a centralized polity. She therefore strives to demystify key aspects of governance and religion in this period of interest.

Ahmed strives to augment the existing structural and institutional knowledge of the Delhi Sultanate with a discussion of additional sources on some aspects of the behavioral and relational dimensions of political power. Firstly, she attempts to shed light on the relations of the powerful and the powerless "within the prism of collective historical experience". Secondly, she explicates informal behavioral patterns such as trust, paranoia, loyalty, betrayal, and patrimonialism that crystallize into norms and traditions and become the identity markers of the sultanate's political structure. Thirdly, she discusses distributional aspects of power, such as centralization and hierarchy, and attempts to rationalize the working of the sultanate's administrative system. Finally, she deals with issues of authority and legitimacy by investigating claims of moral validation of the sultan's power through culture, tradition, and religion (13).

Cycles of regime formation, regime perpetuation, and regime disintegration, which Ahmed identifies for each one of the sultanate's four ruling dynasties, are crucial for her understanding of her subject. By probing into these cycles, she attempts to trace continuities and discontinuities in the power dynamics of the major northern Indian Muslim states between the eighth and fourteenth centuries (XI).

The study consists of an introduction (1-13), nine main chapters, and a conclusion. In Chapters 1 and 2, Ahmed deals with the history of Muslims in India prior to the sultanate period. Chapter 1 (14-29) focuses on early Arab trader and settler communities, while Chapter 2 (30-40) examines Mahmud of Ghazna and his conquests on the subcontinent. Chapter 3 (41-58) deals with the Ghurid dynasty from present-day Afghanistan, as well as with Shihab al-Din Ghuri, whose adherents went on to found the Delhi Sultanate. In these chapters, Ahmed strives to discuss authority patterns and legitimacy under the Arabs, Ghaznawids, and Ghurids, sets the context for her discussion of power relations in the Delhi Sultanate, and traces the roots of historical experiences of Muslim rule that led to the emergence of the Delhi Sultanate (11).

Chapter 4 (59-72) focuses on the first sultan of Delhi, Shams al-Din Iltutmish, while Chapter 5 (73-97) discusses the latter's offspring and his important elite men. Chapter 6 (98-112) deals with Ghiyas al-Din Balban, who founded Delhi's second ruling dynasty. In these chapters, Ahmed strives to explain the relationship between the sultans, the ruling elites, and their subjects under these first and second dynasties' rule. Chapter 7 (113-49) and 8 (150-82) then focus on the third and fourth dynasties. Here, Ahmed discusses political matters and economic policies, with the respective rulers' patrimonial staff (13) receiving special attention. Chapter 9 (183-87) is a summary, alluding to the "political interregnum" (13) of approximately the last 130 years of the sultanate. The conclusion (188-98) summarizes the study's results.

The study is based on sound assumptions that shape current historiographical research in Europe, the United States, and elsewhere. For example, Ahmed is correct in giving individual players priority over structures (13). This approach allows us to accentuate the fluidity of the human past where research has often strongly focused on structures, rules, and set orders. This is even more necessary in the case of the Delhi Sultanate.

Ahmed is also correct in stating that legitimacy, matters of which play a crucial part in her study, is first of all a matter of theory that may not necessarily mean much in practice (29). In political practice, success is what actually matters and is what ultimately legitimizes a ruler. (Literary) approaches of proclaiming this ruler's legitimate claim to the rule he had already won only come afterwards. In the Delhi Sultanate, again, this is even truer than in other polities of the Eastern Islamicate world. Furthermore, Ahmed correctly identifies favor as the crucial factor for the political and social promotion of elite men, instead of formalized education and training (94). While this type of education may have existed, it is almost impossible to prove based on the scarce source material.

However, there are aspects of this study which do not always seem to reflect the current state of research. In addition to the study being a "classical" political history similar to Peter Jackson's The Delhi Sultanate (the study relies on this work; however, it does not add much to it) [1], some of its underlying assumptions may be called classical as well. For example, the idea of equating centralized rule with good rule, with the desirable order of things, occurs throughout the study, as do the cycles of formation, perpetuation, and disintegration of every rule, followed by the formation of the next one. Furthermore, the underlying ideas of the role of the iqta-system or of the members of the elites being completely dependent on the ruler (5) have been convincingly called into question by recent studies on neighboring regions of the Persianate world. [2] The same is true for the alleged beginnings of Muslim rule in India, which have long been centered around the figure of Muhammad bin Qasim, as described in the Chachnama of Ali Kufi. Ahmed does likewise (16), although recent research has argued that, due to the nature of the Chachnama, one should be cautious when doing so. [3]

More important, however, is the way in which the study deals with its sources. In the main chapters four through eight, Ahmed essentially renarrates these works. Consequently, Muslim Rule in Medieval India is fundamentally shaped by its sources. Chapters 4 and 5 essentially follow Minhaj al-Din Juzjani's Tabaqat-i Nasiri, a chronicle from Delhi's thirteenth century courtly sphere. This concerns not only the study's contents, but even its structure, exemplified by Chapter 5 (Juzjani has the same "chapter", his tabaqa 22 on Iltutmish's important military slaves [4]). Chapters 6 to 8 essentially follow Ziya al-Din Barani's Tarikh-i Firuz Shahi, a chronicle that was originally designed to continue Juzjani's narrative. Although Ahmed consults numerous other sources as well, Barani's narrative fundamentally shapes the text in both content and structure.

Muslim Rule in Medieval India is a study that does not conclusively answer all of the questions it poses, especially as its crucial chapters mainly reproduce narratives from the Delhi Sultanate's courtly sphere. It is, however, based on sound assumptions and poses quite interesting questions concerning the functioning of the Sultanate of Delhi.

[3] Manan Ahmad Asif: The long thirteenth century of the Chachnama [sic], in: Indian Economic & Social History Review 49/4 (2012), 459-91; very detailed, but published at almost the same time as Ahmed's study is Manan Ahmad Asif: A Book of Conquest. The Chachnama and Muslim Origins in South Asia, Cambridge, MA 2016. Regarding the latter, see also the review in this forum.