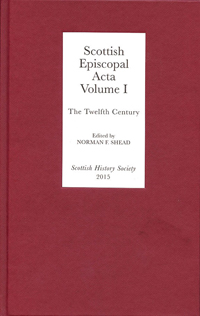 Norman Shead has produced a detailed edition of Scottish Episcopal Acta that will be a great addition to various fields from church history to parochial history as well as legal and socio-political studies of twelfth-century Scotland.

The volume comprises 259 acta from nine dioceses in twelfth-century Scotland; Aberdeen (11), Brechin (16), Caithness (1), Dunblane (10), Dunkeld (16), Galloway (12), Glasgow (41), Moray (7), and St Andrews (145). This represents by no means all the existing dioceses in Scotland and, as noted by Shead, the dioceses of Ross and Argyll provide no acta in this period. Within each diocese the material is ordered by bishop. For each bishop's acta the same order, based on document type, is used starting with profession of obedience and moving through grants and confirmations in alphabetical order of beneficiary, diocesan business, conclusion or announcement of an agreement, judgements as papal judges delegate, letters to the pope and prelates, and finally dealings with lay persons. The volume also includes 136 lost acta which can be deduced from other sources.

The editorial work on the acta has been carefully and systematically undertaken. Shead has followed convention in dates and names, which is helpful as it means the work retains comparability with other similar volumes. He utilises Watt's Series Episcoporum for bishops and Fasti for dates. [1] The consistent expansion of names in the acta, for example in witness lists, follows current convention and will be useful for prosopographical studies. When editing the acta Shead has decided on two slightly different approaches depending on whether the acta survive as an original single sheet manuscript or as a copy only, medieval or later. This is well justified as it helps preserve key elements of the originals for the reader who might not otherwise be able to see them as many are in private ownerships. The differentiation in editorial approach is well done and mostly visible in the textual notes instead of the text of the acta and this means it does not create any obvious discrepancies between the two categories.

The textual notes given are very detailed. For example, Shead notes visual and physical features from the acta, commenting on decorated letters, or when text is written around a hole that occurs in the vellum (no. 8), or even noting within the text when the folio changes over (no. 63). The detail is useful, perhaps more so for the manuscript originals than for cartulary copies. The textual comments regarding the text, decorations, and seals are particularly impressive of the original single sheet manuscripts and go on to give dimensions of the acta and any extant seals. This will be invaluable for anyone unable to personally visit the many archives or private collections which have been used for this volume. It is a shame that the volume contains no pictures of the originals, particularly those with seals, as these would have helped and supported the written detail given.

The volume also includes two appendices which support the extant and lost acta. The first lists the sources, distinguishing between originals, medieval copies, later copies and prints for each of the bishops. The second appendix collates episcopal absences, again by diocese and then by bishop. This is done in the same order as the acta are listed, and thus facilitates its use. The volume also includes a short glossary of words which will make the volume more accessible to scholars who might be less familiar with charters, Scottish or otherwise.

The clearly edited list of sources, originals, manuscripts and printed copies, will be of help to anyone wishing to easily find and consult them for any further study. Fields which will find Shead's volume the most useful are the study of charters and charter diplomatic, and church history. The detail regarding the manuscripts used, for the cartulary copies and for the original single sheet charters, provides clear and extremely comprehensive comments on each actum. Comments regarding the acta's content as provided for each actum help contextualise individual texts in relation to other episcopal, royal or other lay acta or charters. This helps track grants and the movement of land across different space and time. In his introduction to the volume Shead uses these comments to discuss socio-political developments as can be evidenced in the acta. Further to any direct use of the volume on its own, the acta have wider applications. Current scholarship on Scottish Charters has embraced the use of open access databases and Norman Shead's volume complements this. The acta have also been incorporated into the People of Medieval Scotland database - a collection of medieval Scottish Charters from 1093-1314 - which means that the acta are functional research material. [2] Once identified in the database, it is possible to go and explore Shead's volume or vice versa.

Beyond the immediate focus on Scottish episcopate and charters, it must be noted that the volume will be of use to many more areas of scholarly research and interest. The acta serve as a useful insight into social and political developments in twelfth-century Scotland. The wider relevance to scholarship in Shead's volume is clear, for example, from his own comments on the bishops' relationships with the papacy and the English Church which sought to enforce supremacy over Scotland's church and especially the bishop of Glasgow. The detail and comments in the acta provide enough material for these suggestions to be studied further. Useful comparisons, which could be taken further by wider research, are also made by Shead in relation to developments in diplomatic and the relationships between the episcopate and the crown or magnates in the two countries. The detailed editing and summary analysis provided by Shead are a valuable source for historians on this and related fields.