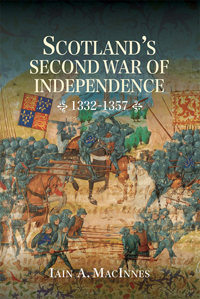 Iain MacInnes' Scotland's Second War of Independence 1332-1357 is a welcome addition to the scholarship on Medieval Scotland's conflict-ridden relationship with England. In comparison with the First War of Independence, the Second War has received far less attention from historians. As MacInnes himself notes, this is largely due to the greater availability of sources pre-1328 and the presence of popular figures like William Wallace. The focus on the later war helps enhance the study of this period. MacInnes' book is built on five chapters which focus on the events and participants of the Second War. He begins with the history of the war in the period 1332-1357, and then moves onto the composition of the Scottish Army and the individuals involved in the conflict. The final two chapters focus on the impact of the war on the general population and the representation of the war and soldiers.

Chapter one's clear and concise narrative of the war provides a solid starting point. It ensures the book is accessible to readers with various levels of familiarity with the war. A strength of MacInnes' narrative and analysis is that he ties the discussion within modern scholarship. He sticks to modern categorisation of the war's participants as Bruce Scot, Balliol Scot, English or Disinherited, rather than simply Scottish or English. The use of detailed terms also helps simplify an otherwise complex narrative spanning 25 years and involving multiple parties. The terminology also highlights the importance of drawing distinctions between different Scottish factions and that this was not simply an Anglo-Scottish War, but a conflict within Scotland. The book does perhaps focus more on the Bruce Scots than on the Balliol Scots. Chapter three for example, which provides short biographies of the persons involved gives mostly Bruce Scots' biographies. This may be because the Bruce Scots were the ultimate victors. However, more detail on Balliol Scots could have provided a more thorough overlook of both sides in this complex war.

Although the book is very much a study of war, military, and knights in medieval Scotland, Iain MacInnes does relate his key arguments to wider military history and Scottish history. For example, in chapter two he highlights the role of France as the source of funds and goods for Scotland's army. Similarly, in chapter four, on conduct in war, his comparison of English and Scottish behaviour highlights the situational variability of medieval warfare. The most valuable comparisons made by MacInnes are with the First War of Independence. In so doing, the discussion is related to current research on the changes facing Scotland in the fourteenth century. By identifying fundamental comparisons between the two wars, whether it be on the role of the Guardians or the role of the Common People in the outcome of the war, MacInnes makes the work relevant for those studying thirteenth and fourteenth century Scotland in general and not just within the notion of war. Although the Second War lacks famous leaders, like William Wallace, MacInnes is keen to stress how the strength of the Bruce Scots' leadership and attacks helped them gain an edge in the long conflict. Through the use of wider scholarship on England, Scotland, or even the Hundred Years' War, and the development of chivalry and professional knights, MacInnes is also able to place his work within wider scholarship on medieval Western European conflict.

While the writing is accessible and easy to follow, the book could offer more in terms of visual aids. The book includes two maps, one of Scottish Castles in the period and another of the 1333 Scottish invasion into Northern England. A map including key battle grounds, both local skirmishes and bigger battles, could have helped place the events firmer into the Scottish landscape. Similarly, the book only provides two tables, one showing the valuation of horses and another of the Scottish Earls present at the key battles of Dupplin Moor, Halidon Hill, and Neville's Cross. A list of Guardians for the Bruce Scots, or of active persons and the side they supported could also have helped establish the complexity of the events and relationships further. However, it is possible that there were limits to visuals, and that their final number was outwith the author's control.

As is always the case with medieval history, the lack of sources is a limitation, but not a restriction. MacInnes does very well to address this throughout the book and uses sources very well. Source limitations are perhaps most notable in chapter five which tackles perceptions of war and knights. The discussion is stimulating, but due to the sources being mostly late-fourteenth century and largely English - factors which MacInnes himself acknowledges - it does at times come across like an outlier chapter. The material used to discuss knightly self-representation links up to themes across the book. However, the lack of significant Scottish material from the period 1332-1357 means that the final chapter at times seems to move away from the intended focus: Second War of Independence.

Overall MacInnes has produced a valuable modern study on a lesser known Scottish war with strengths in its accessibility and themes. The arguments made, the material covered, and the way in which MacInnes tackles chivalry, military, conduct at war, and contemporary allegiances emphasise the significant changes and continuities from before that took place during the war. The book also serves more general medieval military scholarship, making it of use to those studying medieval armies and their development and the conduct of knights and soldiers in war.