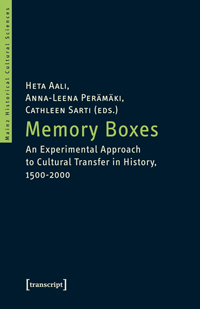 In his introduction to Forging European Identities, 1400-1700. Cultural Exchange in Early Modern Europe (2007), the fourth volume in the ESF-funded project on cultural exchange, the (art) historian Bernd Roeck introduced the concept of the Erinnerungsschachtel or memory box within the field of cultural transfer. A memory box, he stated, is an "artefact, [...] a container which already contained legacies from the past when it was being made". Reaching back in time and with a provenance in different regions, these objects - be it works of art, clothes, pieces of furniture, books, documents and so on - "got filled with memories" and served to artists, artisans and thinkers in other geographies and times as a starting point for the production of completely new objects and thoughts. [1]

In Memory Boxes, a volume of essays resulting from a collaborative project between the Department of Cultural History at the University of Turku and the Special Research Unit "Historical Cultural Sciences" at the Johannes Gutenberg University in Mainz, this concept is elaborated on further. Using the memory box as a metaphor, the contributors aim to apply the idea both as a theoretical concept and a methodological tool to unravel the complexities of cultural transfer.

Originally a wooden box in which keepsakes are collected and preserved, the idea of the memory box, according to the editors' introduction, can be used when analysing the dynamics of cultural transfer - both synchronically and diachronically. It is in this last aspect that the "experimental approach" of the volume is positioned. Cultural exchange, transculturation or cultural transfer - the term preferred by the editors - has been studied in most cases as a horizontal process of mutual influence between cultures separated socially, economically, intellectually, geographically.

Yet the temporality of cultural transfer processes has until now barely been looked at. It is here, that the notion of the memory box becomes urgent: it is an "agent of cultural displacement" both in space, and time. The moment of opening such a box allows a poignant view of a specific instance of cultural transfer; the interpretation of objects by those living in a different cultural setting.

In particular, the application of the metaphorical memory box places the analysis of cultural transfer in a wider context, namely that of cultural memory. A term coined by Jan Assmann in 1992, it denotes the (remembered) knowledge that holds societies together, a connective structure of mutual rules and a shared past. The tools to accomplish this are to be found in rituals, narratives and artefacts that (re-)produce meaning and interpretation of the past.

Memory boxes are "cultural constructions", the editors explain, conceptual storage locations of layers of memories and, simultaneously, agents of cultural transfer over space and time. Importantly, they have to be considered in isolation, that is, taken away from their original context. Instead of focussing on the cumulative reception of a memory box over time, cultural historians should look at the breaks and ruptures in history, those specific moments when "the memories of the past are revitalised or reinterpreted". (Although the editors do not mention Foucault, clearly his ideas on the importance of rupture in our understanding of epistemes of particular periods filter through here.)

So what exactly can constitute a memory box? The contributors have opted for three categories to illustrate their idea: topoi (of massacre, martyrdom, the Golden Age and providence), personalities (Queen Clothilde and Henry the Lion) and artefacts (sung and written poetry in the Kalevala, the 1911 film Finland, diaries and the Scottish Coronation Stone). These categories provide illustrations of the various ways the holdings of the given memory boxes are transferred unto other (later) audiences.

Topoi originally are rhetorical tools to build an argument, with the intended audience already familiar with a complex of connotations. A topos is immaterial, pertaining to a place, time or idea and thus, the contributors state, have been studied mostly as sets of textual and visual images developing over long periods of time. However, the memory box-method enables one to look at, say, the topos of martyrdom in a specific historical moment, opening the box - as in the essay by Kristina Müller-Bongard - in London in 1563. Propaganda and publicity, it is made clear, construct collective memories of events, which compete, and then take precedence over other memories.

Personalities - in particular royalty - constitute the (later) representations of real persons and it is in the process of the memory box's creation that, according to the authors of this section, the location of cultural transfer is positioned. Indeed, the historical person can be perceived as a lieu de mémoire, embodying narratives and memories, whilst the memory box of this personality, opened up in another time and place, that is, in an isolated context, revitalises and changes these narratives. Thus, Matthias Schnettger shows, the memory box of Henry the Lion's personality - in the form of an opera performed in 1689 - helped Ernst August of Hanover secure the dynasty's claim for electoral dignity. Thirdly, the volume considers artefacts. Characterized by their materiality, objects can only become memory boxes if they hold specific content and meaning, apart from their form. For it to become culturally shared, the object needs to become public via an agent, who produced it - for example the diaries written by two Jewish women in the 1940s.

What then, does this experimental approach bring to the study of cultural transfer? The editors themselves conclude that in cases where cultural transfer and collective memory are both at stake, the concept of the memory box is a strong one. Focusing on an isolated element - be it an idea, person or artefact - allows for an in-depth study, fusing synchronic and diachronic processes. However, one could argue that this isolation from context is never really possible. Yet does that contaminate the concept as the editors seem to think? After all, cultural transfer and cultural memory are processes with their own, multi-layered dynamics, constructed and reconstructed every time the box is opened. The idea of the memory box is an inspiring one, and as such, it can certainly open up new vistas for cultural historians.