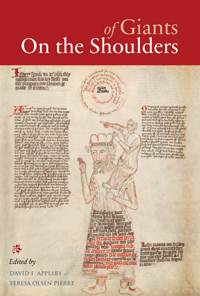 This collection of ten essays honors Glenn W. Olsen, a professor of medieval history who specialized in medieval historiography, education, canon law, church reform, marriage, spirituality, the body, and human sexuality. The essays explore a key theme in Olsen's œuvre: "how one generation understands itself in relation to the past as it moves into the future" (1).

The volume is divided into four parts followed by a bibliography of Olsen's publications. The three chapters in Part I by Carol Neel, James Muldoon, and Bernard F. Reilly analyze different medieval authors who relied on the authority of the past. In Chapter 1, Carol Neel offers a novel reading of the Liber manualis, a handbook of religious instruction that Dhuoda of Uzès, a 9th-century Frankish noblewoman and wife of Count Bernard of Septimania, wrote for their son. Neel builds upon Olsen's observations that Dhuoda's reading of biblical passages about leadership transcended the usual monastic interpretations by using them as models of conduct for Christian society at large. She adds that Dhouda sought to rebuke her husband and the Carolingian princes for not heeding biblical ideals.

In Chapter 2, Muldoon follows Olsen in challenging assumptions that medieval Europe developed uniformly in a linear process of Christianization. Muldoon critiques stadial theory, according to which Christianized societies should follow the same process of development from pastoral to agricultural to urban to commercial societies, in his study of 12th- and 13th-century English religious and secular critiques of the Irish for failing to develop religiously, politically, and economically like England following its Christianization in the 9th century. Drawing parallels with encounters between natives and Europeans in America and Australia, Muldoon calls for an alternative to stadial theory that considers the "mutual interpenetration of cultures by one another, as well as regression or degeneracy on one side or the other" (54).

Reilly attempts to resolve the enigma of the anonymous Leonese Chronica Adelfonsi Imperatoris by proposing a new theory of multiple authors and hybrid literary genres: an original writer who relied upon traditional annal materials; a second author, possibly Bishop Arnold of Astorga, who incorporated gesta from Castilian, Aragonese, and Muslim Almoravid and Andalusi sources; and a 13th-century author of the poem of the conquest of Almería, who imitated the Cantar del mio Cid. Reilly ventures that the last author had difficulties in completing the poem during the reign of Alfonso VII's grandson, Alfonso VIII, whose untimely death in 1214 led to civil war in the kingdom.

Three chapters in Part II on change and growth explore examples from 9th-century Francia that illustrate conflicting claims over the past. Paul Edward Dutton examines the Translation and Miracles of the Blessed Martyrs Marcellinus and Peter by Einhard, the author of the Vita Karoli Magni. Einhard wrote the Translation to document the miracles of two 4th-century Roman martyrs whose relics he acquired in order to lend prestige to a church and cloister he had built. According to Dutton this reflects Einhard's efforts to transition from courtly to monastic life. Building upon Olsen's notion of the monastery as a "community of distance" Dutton argues that Einhard claimed rightful possession of the saints' relics to justify his retreat from court while preserving his influence there, and to defend himself against challenges to his religious authority.

In Chapter 5, Martha Rampton examines the love triangle involving King Lothar II of Middle Francia, his legitimate but sterile wife Theutberga, and his mistress Waldrada, who bore him two sons. As Theutberga's sterility and Lothar's attempt to divorce her and marry his mistress were matters concerning Church and State, most scholars have focused on the political and legal consequences of the affair. Instead, Rampton looks to Olsen's work on marriage, sexuality, and love and to Barbara Rosenwein's notion of "emotional communities." She argues that 9th-century textual allusions to the king's "passionate love" for Waldrada and hatred for Theutberga were taken seriously by churchmen as "viable motivations for the choices surrounding the affair," (94) and suggests that the texts' emotional discourses illustrate the emerging acceptance of romantic love as a basis of spousal choice.

James A. Brundage pays homage to Olsen's change in research focus from medieval canon law to theology with a study on the processes that led canonists to move from a theological approach toward a legalistic one based on Roman civil law in the 12th and 13th centuries. Examples of this interdependence between the two laws include the condensing of papal teaching and authority in legal texts such as the Corpus iuris canonici.

The three chapters in Part III by Giles Constable, David Appleby and Teresa Olsen Pierre, and by Alberto Ferreiro explore ideologies of Christian renewal and reform in the individual, in homage to Olsen's work on the history of individualism. Constable examines spiritual emptiness and ascetic exile, key concepts in monastic spiritual renewal throughout the western Middle Ages. He considers various works including the Life of St. Anthony, the Dialogues of Gregory the Great, 7th-century hermit Dadisho Katraya's Treatise on Solitude, sermons by Bernard of Clairvaux and Hugh of St. Victor, and the writings of Benedictine abbot William of St-Thierry and of mystics Meister Eckhart, Catherine of Sienna, and Margaret Porete to explore the dialectic between external and internal solitude.

Appleby and Olsen Pierre and Ferreiro discuss the relation between spiritual reform and theological anthropology evinced in the writings of Bernard of Clairvaux and Dominican preacher St. Vicent Ferrer, respectively. Ferreiro locates St. Vicent's sermon on St. James the Great within the long tradition of imitatio Christi but shows how the focus on James' imitating the human aspects of Christ (preaching, struggling against demons, suffering persecution and martyrdom) reflects a shift beginning in the 12th century from a "Christo-mimesis that concentrated on assimilation to the divine nature, to one that took the human nature of Jesus as its subject" (18-19).

Finally, Part IV consists of one chapter on the possibilities and limitations of breaking with tradition in the modern period. Frank Coppa examines the career of Virginia Oldoini, Countess of Castiglione who defied traditional roles for women and diplomatic conventions in serving King Victor Emmanuel II of Piedmont Sardinia by seducing Napoleon III to obtain French support for Italy in its conflict with Austria. Despite her success the countess was barred from becoming a career diplomat. Coppa believes the sexism of Italian agents and historians of the Risorgimento led them to stress the salacious details of her relations with the Italian king and Napoleon and ignore her political role in the unification of Italy.

On balance the volume succeeds as a worthy homage to Glenn Olsen, yet the relation between Olsen's work and some of the contributors (e.g., Reilly and Coppa) could have been made clearer for readers. This is especially true of the final chapter by Coppa, which already suffers from disjointedness as the sole chapter in Part IV, whereas the previous three parts consisted of three chapters each, and as the only case study treating the modern period.