Scott G. Bruce: Cluny and the Muslims of La Garde-Freinet 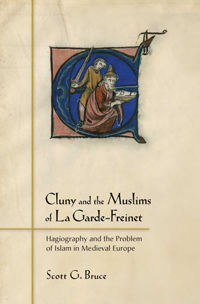 Scott G. Bruce uses an obscure report of the kidnapping of the abbot of Cluny in 972 by Muslim brigands in Provence as the starting point to explore how Christian perceptions of Islam evolved during the European Middle Ages. The kidnapping of the abbot of Europe's most powerful monastery galvanized local feudal lords to overcome their differences and drive the Muslims from Provence. The incident also prompted the Cluniac monks to tell the story of Maiolus' abduction repeatedly between 1000 and 1050. Bruce examines these diverse accounts to "gauge the changing perceptions of Muslims over time, during the century before the First Crusade...when information about Islam in northern Europe was sporadic and ill-informed." He argues that the hagiographic episode depicting Maiolus challenging the Muslims with rational arguments had a "powerful influence" on Peter the Venerable (2). Drawing methodological inspiration from Margaret Atwood, Bruce shows how successive hagiographers tailored the traditions about the abbot's abduction to address contemporary concerns about Islam, such that each retelling "added new and different meanings about the Muslims of La Garde-Freinet for the Christian audiences of these texts" (4).

Bruce develops his argument in four chapters. Chapter 1 reconstructs the historical context of the abduction. He discusses the perils that merchants and pilgrims faced travelling between northern Europe and Rome; the Muslim settlers in Fraxinetum and their impact on transalpine travel; and the career of Maiolus, who made several journeys across the Alps during his abbacy. Monastic records suggest that the greatest dangers facing travellers were wild animals, bad weather, and brigands. Merchants and pilgrims were the preferred targets of brigands because they carried large sums of gold and supplies. Bruce challenges scholarly claims that the Muslims of Fraxinetum were Andalusis and argues that they were an "autonomous, entrepreneurial community" whose mercenary and slaving activities resembled the Muslim settlers in southern Italy (26). Regarding Maiolus' abduction, Bruce focuses on the abbot's letter to Cluny preserved in a vita composed by Cluniac monk Syrus circa 1010 since it provides first-hand insight into Maiolus' perception of his Muslim captors.

Chapter 2 examines four hagiographic accounts of Maiolus' kidnapping produced by Cluniac monks in the 11th century to illustrate how the narrative changed over time and interpret what these changes reveal about the spread of knowledge about Islam in Northern Europe. Bruce contends that the Cluniacs did not develop a consistent image of Muslims prior to the First Crusade because their aim was not to advance such an image but rather to elaborate a saintly portrait of Maiolus for their own religious ambitions. Thus the earliest account composed by an anonymous monk from Pavia in 1000 portrays the Muslims as savage adversaries sent by God to test the faith of Maiolus, whose saintly steadfastness reverberated in the miracles he performed in Pavia. By contrast, the Life of Maiolus composed by Syrus at the behest of Maiolus' successor Abbot Odilo in 1010 sought to contest the Pavian claims of a privileged relationship with Maiolus by extolling the intercessory powers of the monks at Cluny: Syrus' focus on how Maiolus persuaded some of his Muslim captors to convert through preaching and disputation served this purpose. By contrast, the life of Maiolus preserved in Cluny monk Rodulphus Glabers' Five Books of Histories (ca. 1040) revels in describing the destruction of the Muslims. Bruce observes that whereas these 11th-century hagiographies reveal diverse portraits of Islam, by the mid-12th century following the Second Crusade a more uniform polemical image emerged, which was shaped largely by Peter the Venerable. Prior to discussing Peter the Venerable, Bruce briefly mentions the failed mission of Anastasius, a Cluniac hermit reportedly sent to Spain by Pope Gregory VII in the 1070's to proselytize the Muslim ruler of Saragossa. Yet the relevance of this "interlude" is debatable since Bruce finds no evidence that tales of Maiolus' captivity informed Anastasius' mission or that this mission influenced Peter's attitude toward Muslims.

Bruce is more persuasive in Chapter 3 where he departs from scholarly opinion that Peter's commissioned translation of the Qur'an indicates "tolerance" toward Islam. He concedes that Peter's anti-Islamic writings differed from his treatises against heretics and Jews in using reason as a tool of persuasion but argues that this was "a last recourse in the aftermath of the Second Crusade" "when the weapons of the crusaders proved to be ineffective against [the Muslims]" (8). He contends that originally Peter did not commission the translation of Islamic texts into Latin in order to refute Islam himself but rather "to attract someone" (ideally Abbot Bernard of Clairvaux) "who would read the contents of the Toledan Collection and compose 'a worthy response...to counter this contagion'" (84). Bruce posits that Bernard's lack of response, coupled with Christian losses in the Second Crusade prompted Peter to compose his polemical treatise, Against the Sect of the Saracens. He notes that Peter used two registers in the text, a hostile tone in the prologue aimed at Christians, in which he condemned Islam as the "sum of all heresies," and "a much more conciliatory register" in which he addressed an "imagined Muslim audience" (95) using reason to discredit Muhammad's prophethood.

Finally, in Chapter 4 Bruce presents his central thesis that Peter the Venerable's use of reason in Against the Sect was modelled on the stories about Maiolus' captivity. Bruce believes that scholars have not sufficiently explained the novelty of Peter's method of direct disputation with Muslims in this treatise. After surveying other Christians, such as Peter Damian, Peter Abelard, and the author of the Apology of al-Kindi who "marshalled the forces of reason in defense of the Christian faith" (107), Bruce asserts that these "towering intellectuals" "had very little impact on Peter's enterprise to confront Islam" (116). Yet the rationale for this assertion rests on the fact that in Against the Sect Peter directly addresses the Muslims rather than conjures up imaginary interlocutors as in these other works. More persuasively, Bruce shows that Cluny was "saturated" with stories about Maiolus during Peter's abbacy and that Peter also commissioned a new Life of Maiolus that followed Syrus in stressing that the Muslims converted to Christianity in response to the "life-giving words" of Maiolus (125). Bruce concludes that after the Second Crusade Peter found in Maiolus' example of "reasoned debate" with Muslims a new approach to the problem of Islam (129). Finally, he suggests parallels between Peter's use of reason to refute Islam "when it was clear that the force of arms had failed" and later 15th and 16th-century anti-Islamic polemical works composed in the context of the Ottoman threat in Europe.

Scott Bruce brings new insights to the well-worn topic of medieval Christian polemics against Islam. The hagiographic traditions about Maiolus and their influence on Christian attitudes toward Muslims largely have been overlooked by scholars. He also makes a valuable contribution to the historiography on Peter the Venerable by revealing the link between this abbot's position on Islam and his promotion of Maiolus' legacy.