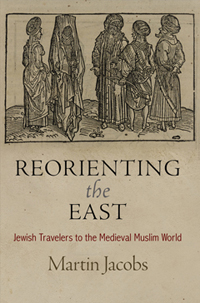 Martin Jacob's Reorienting the East: Jewish Travelers to the Medieval Muslim World seeks to explore "what constitutes and informs medieval Jewish travel literature about the Islamic world" and demonstrate that Jewish travel writing problematizes the "clearly defined" notions of "East" and "West" that inform much of the historiography on medieval Christian travel literature (2). Given that most Jewish travel writers hailed from Europe and journeyed to Islamic lands during the Crusader period, Jacobs asks whether we should expect their perspectives on the Middle East and "Orientals" to coincide with those of Western Christians. Jacobs shows that their perspectives largely do not coincide and that Jewish travelers often "deliberately reoriented the East and decentered Europe" since their descriptions of the Islamic World, especially the Holy Land, often subverted the Western Christian vision (3).

Jacobs' notion of "reorienting" the East also critiques postmodern interpretations that "regard all Western travel writing as representing an 'Orientalist' [...] gaze on an utterly different, exotic rest of the world" (3). While such interpretations hold true for many 19th-century Orientalist European travel writers, Jacobs argues that Jewish writers do not participate in the "theology of supersession" that drives Christian accounts of the East because of their condition as exiles subjected to Christian rule. Particularly intriguing is Jacobs' observation that European Jews tended to portray the Islamic lands "as an alternative world" to challenge Christian hegemony. (5)

Jacobs' study is also methodologically innovative. He criticizes previous positivist and literary approaches and explains how his methodology differs. As a cultural historian, he seeks to uncover the historical significance of Jewish travel literature by interrogating it in novel ways, asking how medieval European Jews engaged with Near Eastern cultures and whether Jewish cultural attitudes toward the Islamic world differed from those of the Christians.

Jacobs divides his study into three parts. Part one is comprised of three chapters that discuss, respectively, the travelers and their works; the motivations (pilgrimage and trade) and the conditions under which they traveled; and the challenges (logistic, religious, cultural) they faced when traveling to and from the Levant.

Part two, also comprising three chapters, focuses on the Jewish conceptualization of the spaces and places they visited. Chapter 4, on Palestine, shows that Jewish authors dealt with the paradox that the "Land of Israel" was ruled and inhabited by non-Jews by "denying the reality on the ground or projecting an alternative Jewish map onto the Christian or Muslim stratum," in order to reappropriate these spaces for Judaism (14).

Chapters 5 and 6, on shared holy sites and Muslim metropolises, respectively, illustrate that multi-faith venues were depicted both as "liminal" spaces and as sites of conflict and contestation. For instance, 12th-century traveler Benjamin of Tudela's polemics against the "idolatrous" Christian Church of St. Samuel and his contrasting "idyllic pictures" of interfaith encounters at the coffin of Daniel in Seljuk Iran and of thriving Jewish communities in Muslim metropolises such as Baghdad serve as a foil of Crusader Palestine and Christian ruled Spain.

The four chapters in part three explore Jewish depictions of the inhabitants of the Near Eastern lands: Muslims and Christians (Chapter 7), Near Eastern Jews (Chapter 8), non-rabbinical Jews - Karaites, Samaritans, the Lost Tribes (Chapter 9), and "exoticized" peoples - the Assassins, the Druze, blacks, and "Oriental" women (Chapter 10). Jacobs stresses the lack of uniformity in Jewish representations Muslims and Christians, but does identify certain trends. Authors in the Crusader period (Benjamin, Petahyah of Regensburg, Judah Aharizi) portray Muslim rulers in laudable terms, praising them for protecting Jewish communities, in contrast to the Frankish oppressors. By contrast, 15th-and 16th-century Italian authors Obadiah and Meshullam's descriptions of violent and cruel Turkish sultans echo European images of "the Turkish menace" that emerged following the Ottoman conquest of Constantinople. Muslim cultural differences - sleeping on the floor, eating with the hands - lead Meshullam to compare them to camels and pigs, in line with European biases toward "Orientals".

Jewish depictions of Christians exhibit a longue durée of certain tropes, e.g., Benjamin and Obadiah label Christian places of worship "houses of idolatry." Yet Meshullam's neutral language reflects the greater identification of 15th-and 16th-century Jewish writers with Occidental culture. Still, Jacobs concludes that though culturally identifying themselves as Italians, Jews were unable to completely overcome the religious differences separating them from their Christian compatriots.

Chapter 8's analysis of encounters with Levantine Jews finds that in assessing daily relations between Jews and Muslims, the authors coincided in depicting relations as "basically peaceful" (179) and in showing that Levantine Jews were subject to fewer restrictions in the Muslim world than the Jews of Christian Europe. Jacobs reveals the vastly different opinions Jewish travelers held regarding their Levantine coreligionists. The comparison of Obadiah's "positive spin" and Meshullam's disparaging account of Alexandrian Jews' "Oriental" customs (e.g., eating with the hands) shows that for some, but not all, European Jews cultural differences between them and the Levantines overshadowed their common religious identity.

Chapter 10 explores how European Jewish portraits of the Assassins, Blacks, and veiled women parallel the fantastical and racialized depictions of "outlandish peoples" and "monstrous races" in Classical, Christian, and Muslim travel writings. The fictitious Book of Eldad ha-Dani and Benjamin of Tudela articulate racist stereotypes portraying Africans as bestial and draw upon "biblical rationalizations" of Africans as the "children of Ham" to justify slavery. Jacobs' analysis of the Jewish "male gaze" upon Levantine women focuses on images of gender separation and female veiling. For Petahyah of Regensburg, the veil signaled the greater modesty of Babylonian Jewish women in comparison with their German Ashkenazi counterparts and exposed the shortcomings of Ashkenazi culture. By contrast, Meshullam's comments on Egypt's "subversive" gender customs and his assumption that Muslim women are more promiscuous than Europeans echo western Orientalist imagery. Ultimately for Jacobs these diverse representations of "Orientals" show that one cannot presume that "by dint of their status as the non-Christian other," Jewish travel writers would be "naturally inclined to display greater openness or sympathy for foreign cultures" (214).

Overall, Reorienting the East makes a valuable contribution to medieval Jewish history and culture, Jewish-Muslim relations, medieval travel writing, and postcolonial studies of the Middle Ages. One minor shortcoming is in Chapter 10, which suffers in some places (the discussion of the Assassins and Druze) from a paucity of textual evidence. Since Jacobs relies mainly on one source (Benjamin), the resulting analysis is not as rich as in other chapters. The treatment of Jewish images of women and gender would have been enhanced by comparing how these authors depicted Christian women, since Jacobs deals with Jewish representations of Christians in other chapters. While the focus on gender separation and veiling highlights parallels with Western Christian representations of "Oriental" women, a consideration of Jewish images of Christian women would have made a novel contribution to comparative studies on "the male gaze." We are left wondering whether Jewish male writers fantasized about Christian women or considered them immodest for not veiling. By not revisiting the theme of women in the conclusion he misses the opportunity to clarify how these representations reflect the ambiguous position of Jews between West and East. Finally, Jacobs' point that Jewish authors could not participate in Orientalism "as a discursive tool for controlling, subjugating, and exploiting the other" due to their relative powerlessness vis-à-vis Christians and Muslims is well taken. Yet a more nuanced contextualization would have mentioned that some Jews could and did exert power over subjugated Muslims and Muslim and African slaves, as witnessed by Jewish involvement in the slave trade over the centuries or in the positions of power Christian rulers granted them in Reconquest Spain.