Michael F. Laffan: The Makings of Indonesian Islam. Orientalism and the Narration of a Sufi Past, Princeton / Oxford: Princeton University Press 2011

Louay Fatoohi : Abrogation in the Qur'an and Islamic Law. A Critical Study of the Concept of "Naskh" and its Impact, 2013 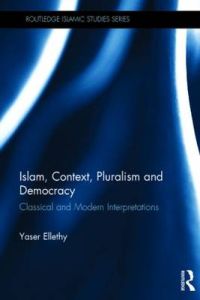 Islam is facing many challenges in the modern social-political context. Especially its compatibility with democracy is frequently questioned. As the main discourses in the modern socio-political context are focusing on pluralism and democracy, Ellethy selects these two concepts for his research on the diachronic development and variability of time and place within the Islamic tradition. His research is divided into six chapters and its aim is to frame the debates on pluralism and democracy in a modern Islamic context. In the first chapter, the introduction, change and development in Islam are discussed. As human intellect is a gift from God, ijtihad (human reasoning) is a valid mean of knowledge. The great diversity in fiqh (jurisprudence) is a reflection of ijtihad and it is this diversity that makes the balance between tradition and renovation an Islamic virtue (9). To avoid bida'a (bad innovation) it is crucial for any reformer to establish a consistency between the Quran and Sunna and the developing contexts. To reach the aim of the book, an interdisciplinary approach to research is chosen. Problems are redefined in a sociological, historical and theological context and Arabic terms are, according to Islamic theological epistemology, defined and analyzed on two correlative levels: linguistically (lughatan) and terminologically (istilahan) (15).

The second chapter digs deeper into the complex Arabic language and its relation to Islam. Primary focus is the use of language as a tafsir (interpretation)-tool. Once the Prophet had revealed the divine words, the religious text entered a new stage in linguistic evolution, namely the diachronic stage. In this stage semantic changes in language occur and methodological interpretation emerge. By illustrating the socio-linguistic process in the book, the relationship between the scriptural and the lingo-cultural becomes clear. The tafsir scale is connected to Gellner's High/Low-language scale with the level E (Extra) of the Quranic Arabic, showing the diversity in tafsir in the contemporary public domain, the diversity in the Muslim community and the relationship between the unchangeable Quranic text and the diachronic Arabic language.

In the third chapter the Islamic concept of development and the limits of innovation, contextualization, and reform are examined. Development is a religious value in Islam. Theology does not seclude practical worldly epistemology. The example is given of Al-Khwarizmi (d.850) who invented the science of Algebra to solve mathematical calculation problems related to inheritance rules and other issues in fiqh. This example shows that whenever one establishes the connection between religion and the worldly evolution and development, one can achieve success in both fields. After development the theme contextualization is examined. By reconstructing the pre-Islamic society the common generalization of al-Jahili (the ignorant society) is criticized. Islam has endorsed several social and ethical codes from the Jahiliyya period as long as they responded to fitra (human nature). The word 'perfect' in the hadith of the Prophet: 'I have been sent to perfect the best of ethics' proves that ethics were already present in the pre-Islamic world (65). Additionally, perfecting should be the norm for every human value in the diachrony of every Islamic reform (293).

The idea of perfection is further elaborated. First by discussing the two main streams in Islamic thinking regarding Islam and modernization, and second by commenting on Sayyid Qutb's idea of perfection. The two main attitudes towards modernization are salih (valid) and muslih (reforming). The former focuses on the revival of the perfected socio-political model of the first generations Muslims, while the latter sees the perfect model as a more dynamic one, as a system that interacts with the developing world. Ellethy suggests a way promoters of the salih and the muslih Islam can meet: in the consistency between the adherence to God's law and the attempt to open the way for this law in practical life. The conclusion that can be drawn from this is that different approaches can be theoretically reconciled: Islam is salih for every time and place if it is able to be muslih to the very context of that very time and place (77). Additionally, Islamic reform is not a reform of Islam, but a reform from within and for Islam.

Chapter 4 focuses on the Islamic concept of pluralism. Pluralism is known as ikhtilaf meaning dissimilarity, difference, variation or diversity. Here the notion of pluralism from a Western perspective should be abandoned. The Muslim view of pluralism originates from the concept of tawhid (oneness of God): 'the more we are inspired by the unity of our existence (one God), the more we are aware of our diversity in pluralistic terms' (107). In the Quran pluralism is perceived as diversity within one universal unity. The implications of the scriptural background on the socio-political context are analyzed, beginning with the Muslim attitudes towards the "Other". The reasonability of the claim of abrogation (naskh) of pro-tolerance verses of the Quran by anti-tolerance verses is investigated, as it influenced the behavior towards the "Other". The "Other" is not a Muslim, the difference is thus made on the basis of faith. Ellethy defines kofr as the opposite of iman (faith, belief): kofr (covering) of the divine truth makes one an unbeliever in Islam. As such, people are seen as believers or unbelievers. The latter, the "Others", are members of the ahl dhimma (people of the covenant) whereas the Muslims belong to the ahl milla (people of the religion/Islam). This means both are 'human' and their differences do not justify treating them unjustly. This is also expressed in Ali ibn Abi Talib's saying: "people are of two kinds, a brother in religion or a counterpart in humanity" (130).

Not only the perception of the "Other" is a determinant of behavior, but also the experience of the own identity. Numerous statistics of the Pew Research Center are used as empirical evidence for the reconstructed religious and cultural identity of Muslims, which Ellethy names 'Muslimness'. It shows that an intra-Islamic heterogeneity exists, compounded by a cultural diversity (161). The 'Muslimness' is further investigated by placing it in the modern context of globalization and Western secularism. As a result of his analysis Ellethy presents a strategy for Muslims in the West to integrate their Islamic community.

The fifth chapter deals with the classical and modern Islamic political interpretations in relation to democracy. From the Islamic classical sources Ellethy picks shura (consultation) as the system closest to the contemporary democratic system. He does not compare them, but rather investigates their compatibility. He investigates whether core values of the political democratic ideal are compatible with the religion Islam.

Throughout the book explorations such as these are made. Relevant verses and hadiths as well as different readings of famous Islamic scholars are reinterpreted by Ellethy. He even introduces new concepts, such as the 'Extra-language' of the Quran and the threefold impetus for Western Muslims. These are all elements of his attempt to reduce the tension between the classical scripture and the modern world. In other words, he seeks ways for Muslims to be able to deal with present day socio-political challenges and keep pace with the developing world. Ellethy's rationalist approach to Islam has the potential to reframe the debate on pluralism and democracy in an Islamic context, as aimed. Additionally, his book is recommended for anyone interested in the essentials of Islamic epistemology because a wide range of Islamic key concepts, terms and views is covered.