Siegfried Wenzel: Of Sins and Sermons 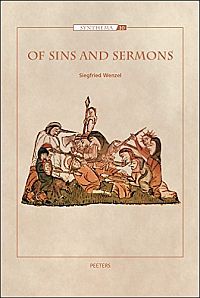 Siegfried Wenzel's Of Sins and Sermons is a companion to his recent volume, Elucidations: Medieval Poetry and Its Religious Backgrounds (Peeters, 2010). Whereas that volume brought together a large number of previously published essays on literary topics, including several on preaching, Of Sins and Sermons focuses more specifically on Wenzel's work on the seven deadly sins, sermons in their manuscript contexts, and other kinds of material for preaching. This handsome volume comprises eighteen items, all but one previously published in journals and edited collections, published from 1968 to 2009, although the majority of the items were published in the past twenty years. Both volumes are immensely useful for scholars and students of medieval literature, history, and culture.

This volume is arranged loosely by related topics, rather than by date of publication. It begins with the earliest publication in the volume, Wenzel's seminal essay first published in 1968 in Speculum, "The Seven Deadly Sins: Some Problems of Research". Here Wenzel highlights the areas of research into the seven deadly sins that he argues "can be fruitfully explored" (2) and he himself gives erudite overviews of each of these areas. These include "the scholastic analysis" of the seven deadly sins (4), their significance in medieval culture, and the iconography of the sins. While scholars have subsequently explored many of these topics, this essay remains an excellent introduction both to the tradition and to the lenses through which this tradition can be productively viewed. Wenzel has also added a Postscript in which he notes that "the call for further work [...] has not gone unheeded" (30) and gives a brief overview of this further work.

The next three items focus on the sins in a variety of settings, beginning with an essay published originally in 1992 on William Peraldus's Summa vitiorum and the forms taken by its later adaptations. This is followed by a rich essay on the ways the seven deadly sins were preached in the later Middle Ages, primarily in England. The last item specifically concerning the sins, "Hearing Confession and the Seven Deadly Sins", is based on an unpublished lecture given at an NEH seminar held in Cambridge, England in 2006. Here Wenzel asks how and where the seven deadly sins affected the life of a fourteenth-century man and woman, and he turns to the logical answer: confession. Wenzel concludes that "for the parish priest and visiting friar who prepared Christian men and women for the Easter communion, [the scheme of the seven deadly sins] was of predominant use and value" (100).

The volume then includes several items devoted to sermon collections and genres, beginning with the 1996 essay, "Sermon Collections and Their Taxonomy", in which Wenzel explores the "taxonomic difficulties [...] as they pertain specifically to sermon collections" (101). This essay is immensely useful for introducing scholars to the variety of ways they might encounter sermons in manuscripts, thus giving them categories by which they can more fruitfully approach this material. This item is followed by two essays exploring academic sermons, one looking at a specific sermon manuscript that "preserves a record of university preaching at Cambridge in the early fifteenth century" (117), and another that focuses on academic sermons preached in Oxford. The latter essay includes an example edition of one such sermon. Further contributions look at other genres of sermons, including one in praise of philosophy, followed by two items exploring sermons for saints.

Two articles in the volume examine heterodox English preachers of the late fourteenth century, including a short article identifying a previously unknown manuscript of John Wyclif's Sermones quadraginta. This is followed by an edition with translation and discussion of an Oxford sermon preached by Robert Lychlade in 1395, the sermon used by Oxford authorities when they accused Lychlade of "propagating heretical teachings" (247). Wenzel concludes that, while the sermon in question condemns "the moral failings observed in different social groups" (273), including the clergy, the "substance of such criticism can hardly be said to be heretical" (273). He wonders to what extent this sermon "reflected Lychlade's notorious preaching", suggesting that perhaps Lychlade submitted to the authorities "a rather innocuous specimen" (275).

The last five items are linked by their ties to the Dominican Order. The first of these looks at a Dominican's preacher's book from late-thirteenth century England, an important find because "books from Dominican houses in England have survived in a surprisingly small number" (277). Another article is devoted to the Dominican, Richard Fishacre (died 1248), in which Wenzel challenges the oeuvre that scholars had previously identified as Fishacre's and includes an edition of one of Fishacre's genuine sermons. In the subsequent article Wenzel offers two more edited sermons, both for St. Dominic, extant in the same manuscript that houses Fishacre's sermon.

The book closes with two articles devoted not to sermons but to preaching aids, both with ties to the Dominicans. One deals with a handbook of canon and civil law written by the fourteenth-century English Dominican, John Bromyard (died c. 1352), an aid for preachers that is much less well known than Bromyard's monumental Summa Praedicantium, but a text, Wenzel argues, deserving "more careful and fundamental study" (353). Wenzel notes that this work is not "an aid that gathers legal material for quotation in sermons, but a genuine preacher's encyclopedia" (375).

The final item in the volume offers an edition of an Ars praedicandi written in sermon form, also likely written by a Dominican, a text that raises many questions about its probable function within a university setting. Wenzel notes that the "piece does not merely demonstrate what a duly constructed sermon should look like, but its opening sentence commends or praises the technique of sermon making", a practice reminiscent of speeches in praise of intellectual disciplines which were "usually the opening lecture for a university course" (392). Wenzel suggests that this text might thus have been used in the university classroom to teach "rhetoric as a verbal art" (393), a topic that calls for "further exploration by students of medieval rhetoric and sermon making" (393).

Aside from bringing together a rich collection of Wenzel's previously published articles and book chapters, along with one previously unpublished lecture, this volume serves a great service by making more accessible a large number of edited texts, primary sources that can be richly mined by future scholars. Along with the ars praedicandi that closes the volume, there are seven edited sermons. This important volume will thus be of interest to students and scholars of medieval sermons, manuscript studies, religious culture, and history. Peeters is to be commended for producing two important collections of Wenzel's scholarly works. Both should find homes in academic libraries.