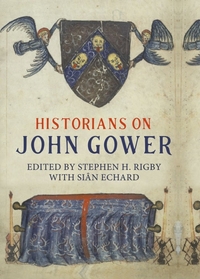 The editors of Historians on John Gower argue that the works of the poet John Gower (d. 1410), concerned as they are with the societal conflicts and political instabilities of late medieval England, lend themselves well to historicist readings. The aim of this volume is to "enable a group of historians to bring their specialist expertise to bear on Gower's poetry and to show what a detailed knowledge of England in the late fourteenth and early fifteenth centuries can add to our understanding of his work" (xxi). But the historians who contributed to this volume do not simply offer historical contexts for Gower's work; the volume's further aim is to "offer new information, perspectives and analyses which will help to widen our appreciation of the significance of, and the pleasures provided by, Gower's text" (xxiii).

This rich volume fulfills its aims: each of its fourteen chapters, some of them lengthy, sheds new light on the context in which Gower was writing while also offering new readings of the works he produced. The chapters in each of the six parts of the volumes build on the preceding chapters to offer a full and complex understanding of Gower's worldview, poetry, and the troubled society in which he lived and to which he responded.

The volume sets the stage with two chapters covering Gower's life and works. Admitting that Gower's life is "something of a mystery" (23), Martha Carlin's chapter on Gower's life seeks to uncover some of this mystery, offering a detailed discussion of what Gower's life-records can tell us, along with his testament and his tomb, both of which, she argues, are "careful images crafted by Gower to serve as public monuments to himself" (25). Carlin also includes short biographies of Gower's associates, friends, and wife, thus placing him within his social milieu. Stephen Rigby's chapter on Gower's works gives overviews of each work and their different versions, and Rigby attempts the difficult task of dating these works and establishing a chronology, a challenging task also taken up for individual works in later chapters. Rigby's overview thus lays important groundwork for the rest of the volume as it covers all three of Gower's major works - Mirour l'Omme, Vox Clamantis, and Confessio Amantis (with its three recensions) - along with Gower's shorter works, all of which will be explored in depth in subsequent chapters.

The following two parts of the volume cover Gower's relationship to the three estates: nobility, commoners, and clergy. Virtually all aspects of Gower's society are addressed in these two parts, including specific groupings within each estate, such as merchants and lawyers among the commoners, and the secular clergy, monks, and friars within the church. Each chapter makes clear that Gower's attitudes towards these groupings were far from straightforward. For example, Part II - Gower and Lay Society - begins with David Green's chapter, "Nobility and Chivalry," which addresses Gower's "deep concern with the roles and responsibilities the secular aristocracy should undertake and how the chivalric ethic might be properly applied" (141). But Green notes that it is often difficult to pinpoint Gower's view of this chivalric ethic as he expresses diverse attitudes across and within his works. Green suggests that readers should likely not try "to resolve the apparent incongruities" (142) in Gower's writings or "expect his works to provide straightforward answers to intricate questions" (143). But, while Gower's works express "a range of viewpoints" (160), Green argues that Gower believed that the nobility's chief function was to maintain order. One of Green's final points is that Gower's rhetoric was pliable "even if it is set within certain moral parameters" (165).

Gower's rhetorical pliability is evident in several of the chapters in this volume, along with his nuanced approaches to specific issues. The chapters in Parts IV and V - "Gower and Gender" and "Gower and Politics" - provide especially pertinent evidence of this pliability. Each of these parts offers two complementary chapters that help to build a complex portrait of a man who responded to the issues of his day in nuanced ways. Katherine J. Lewis's fascinating chapter, "Women and Power," acknowledges the favorable role women play in Gower's Confessio Amantis. Noting that a number of women, specifically noblewomen, owned copies of this work, Lewis explores the ways this poem "spoke to female readers, not only in terms of its depiction of women but also in relation to the active role that such women could play in contemporary politics" (324).

In the complementary chapter in this section, Christopher Fletcher, again focusing on the Confessio Amantis, uses a lexical analysis of terms related to masculinity to examine particular sections of the work, which he then relates to contemporary political events to which Gower was responding. After connecting insightful close readings of parts of the poem to historical events, Fletcher concludes that Gower "seeks to shape a certain kind of moral personality which is also a kind of manhood," associating this idea of manhood "with energy and vigour, with knightly courage and military renown" (378). But, Fletcher notes, Gower also stresses that such "manly honour must be supported by honourable conduct" (378). What comes across in many of these chapters is that Gower never takes a black-and-white approach to the issues of his day, but his chief concern is almost always moral conduct.

Similarly, Part V offers complementary chapters, the first focused on Gower's political theory and specifically his idea of kingship, and the second on Gower's response to the tumultuous events that occurred during the reign of Richard II. Stephen H. Rigby offers a nuanced discussion of what Gower explicitly says about the nature of kingship, arguing that the key to good government lies, for Gower, in the personal virtue of those in positions of power; therefore, "the best defence against tyranny was the moral reform of the sovereign rather than his constraint by his subjects" (391), and the only agent able to bring down a tyrant is God. But Rigby shows that Gower is able to square this theory with Richard II's deposition by viewing it as "a case in which the tyrant's subjects had functioned as the instruments of the divine will" (417). Rigby points out that Gower's political language was "extremely flexible and so could easily be adapted to changing rhetorical needs and shifting political circumstances" (424).

In the second chapter in this section, Michael Bennett examines the specifics of Gower's political views, offering a richly detailed discussion of key events of Richard II's reign and Gower's stance towards them as revealed in changes he made to his dedication in the Confessio Amantis and in the Cronica Tripertita, Gower's poetic account of "Richard's misrule, his tyranny and overthrow" (425). Bennett believes that the three parts of this work were not written after Richard's deposition as has often been assumed; he argues that they were composed close to the time of the events that Gower recounts and therefore reveal his almost immediate reactions to these events. This chapter makes a persuasive case that, while Gower ultimately accepted Henry IV as king, he was not a Lancastrian propagandist nor did he write the Cronica Tripertita "at anyone's bidding" (486), as has often been assumed. This chapter also offers a full and fascinating account of the troubling events that occurred in England during Richard's reign.

In its final section, "Gower and Cosmography," the volume concludes with one chapter on Gower's ideas about the natural sciences as these ideas are set forth in Book VII of the Confessio Amantis. In this chapter Seb Falk unearths some of the lesser-known sources for Gower's "multi-layered cosmography" (491) and offers a detailed discussion of Gower's attitudes towards astronomy, astrology, and magic. But, as is the case with Gower's preoccupations discussed throughout this volume, his "science is part of an education in morality" (524).

The portrait of Gower as revealed by each of the historians who contributed to this volume is remarkably consistent. He comes across as a man deeply concerned with the moral health of all aspects of the society in which he lived, and he uses a variety of rhetorical strategies to address these concerns. Historians on John Gower is thus a rich and substantial addition not only to Gower scholarship but also to our knowledge of late fourteenth-century England. It will be of interest to students and scholars of the literary, political, and cultural history of the late Middle Ages.