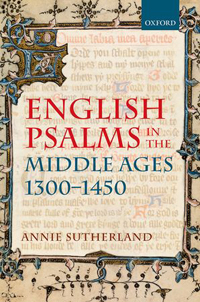 The psalms played a central role in the lives of late medieval Christians, central not only to the Church's public liturgy but also to private devotion. Annie Sutherland's goal in this study is to consider "the ways in which the vernacular psalms versions, both complete and paraphrased, can be read as relating and responding creatively to liturgical patterns and practices" (4). By bringing together a rich body of material from late medieval England and closely examining it through a variety of lenses and with a variety of questions in mind, Sutherland admirably achieves this goal.

Chapter one sets the stage for the rest of the book by looking at who owned and used English psalm translations. Sutherland examines both the testamentary evidence for ownership and the nature of the manuscripts that include psalm translations. She begins with primers before moving onto verse paraphrases and complete psalters. By looking at the manuscript contexts, she also begins to answer questions about the way the psalms were used. For example, in the section on primers, Sutherland points out that they were both devotional and educational, noting that as one "learned to read, one learned to pray" (20). Similarly verse paraphrases emphasize both devotional and pedagogical concerns. This chapter thus sets out Sutherland's "evidential basis on which [her] book builds" (9).

Chapter two, titled "Theorizing Translation," looks at late-medieval attitudes towards translation, exploring where psalm translation fits within the larger 14th-century interest in translating literary texts. Sutherland begins by looking at models of translations inherited from the Roman era and transmitted to the late Middle Ages via the patristic tradition; she then moves on to Chaucer's attitude to translations and late-medieval attitudes towards Bible translation generally, noting that the psalms, seen as the central book of the Bible, were also central to the contemporary debate about Bible translation. She ultimately argues that "Middle English scriptural translators serve, rather than contest, the authority of their divinely inspired source" (73-74).

Chapters three and four delve into the specifics of each of the translations and paraphrases, investigating how the Middle English psalm versions manifest "various conceptions of the role of the translator and of his/her translation(s) in practice" (86). Chapter three looks specifically at the complete psalters whereas chapter four explores abbreviated and paraphrased psalters. Both of these chapters, as indeed the entire study, reveal Sutherland's nuance of thought: she sees faults in some of the translations, or potential faults, but she also seeks to understand the purpose behind the translations. For example, in her discussion of "David þe Kyng," a poetic adaptation of Psalm 50 extant in the Auchinleck manuscript, Sutherland points out that, unlike many psalm paraphrases, it "does not 'delight' in the language of the Psalmist, nor does it craft a technically accomplished commentary on that language" (160). Rather, she shows that it is intended to be easily memorable and accessible to a wider audience. The fifteenth-century poet John Lydgate, on the other hand, shapes his paraphrases to be "creative responses to, rather than direct reproductions of, his source" (166).

In chapter five, titled "Reading the English Psalms," Sutherland now looks at how the psalms were read and interpreted. Here she deals specifically with biblical exegesis in English translation. She shows how some readings engage with the psalms on a "particularly literary level" and others "foreground their specifically Christian resonances" (199). One thing that she makes clear throughout is the "remarkable elasticity of the psalms" (199). She also explores scribal activity as an act of reading, offering ample evidence that many scribes engaged with the texts they were copying. The act of copying the psalms is thus, according to Sutherland, "itself an act of re-reading, inviting further re-reading on the part of their audiences" (208). Sutherland then explores this audience engagement, showing how psalm reading is connected to action, prayer, and penance. She notes in her final section on penance that the psalms, and particularly the penitential psalms, "occupy a curious hinterland": "They are [...] texts to be read both privately and publicly, both in solitude and in community" (220).

Sutherland's final chapter, "The English Psalms?", looks more specifically at the manuscripts containing Middle English psalms and paraphrases to further explore the ways these translations were used and to answer the question: "How English were the English psalms?" (231). This chapter returns to an argument Sutherland made in chapter one that "liturgical and quasi-liturgical activity persisted within an increasingly vernacular devotional climate" (230). She notes too that there was an ongoing interaction between Latinity and vernacularity. The Latin Vulgate was present in some form in almost every manifestation of the vernacular psalms, but the Latin worked with the English "to enhance the experience of psalmic reading" (232). The two languages, according to Sutherland, were not in competition. Sutherland concludes this fascinating chapter by arguing that "[f]ar from exerting a stranglehold over the vernacular, interactions with the Vulgate stimulated some of the most remarkable English literary experiments of the late Middle Ages" (271).

Sutherland ends the book with a short section of concluding thoughts, calling for further research in several fertile areas. The contribution her book makes is a "fresh recognition of the remarkable proliferation of psalm translation, paraphrase, and abbreviation in late-medieval England" (274). She further argues that "[W]ithout the translated psalms, literal and paraphrased, complete and abbreviated, prose and verse, the devotional landscape of the Middle Ages would be unrecognizable" (276). The book also includes useful appendices listing manuscripts of each of the versions examined.

In this well thought out and carefully executed study, Sutherland presents a rich body of material and explores all of its facets so that, by the end of the book, a full picture of the Middle English psalm versions comes into view. The thinking here is nuanced and the writing clear and elegant. Sutherland makes a compelling case that we should not think of Latinate culture as exercising a stranglehold on the vernacular nor of the vernacular translators as rebelling against the language they translated. Rather, she argues, "Far from stifling devotional exploration and invention, the Latin liturgy provided a template on which English intercessory practice could be modelled and enabled vernacular experimentation in the activity of speaking to - and of - God" (276).

This highly recommended book will be of interest to students and scholars of late medieval English devotional culture, literature, manuscripts, and translation practices.