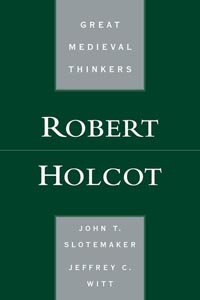 Robert Holcot (c. 1290-1349) was a Dominican friar known for his scholastic works, biblical commentaries, and preaching aids, three seemingly different areas, each of which has made Holcot of interest to scholars. Beryl Smalley has posited that there are three Holcots: Holcot the university scholar, accused of being an intellectual skeptic because he argued against proofs for the existence of God; Holcot the friend of the bibliophile Richard de Bury and one of Smalley's "classicizing friars"; and Holcot the Dominican preacher who wrote the Moralitates as a preaching aid for his brother friars. He is therefore an important thinker of the first half of the fourteenth century, both as a scholastic intellectual and a Dominican preacher.

Robert Holcot is part of the Great Medieval Thinkers series, whose aim, according to the series foreword, is "to provide substantial introductions to a range of medieval authors" (xii) especially for audiences of college and university students. The authors in the series "strive to write in a clear and accessible manner so that those who have no knowledge of these thinkers can learn about them" (xiii). Slotemaker and Witt fulfill this aim and succeed in making accessible not only Holcot's wide-ranging literary works but also the larger intellectual context in which he wrote and the world in which he preached.

The authors use Smalley's Three Holcots as a convenient way to divide the book into three sections, but they are at pains to show that "there is, in the end, only one Holcot" (13). Holcot, they argue, was first and foremost a Dominican friar whose chief motivation was the care of souls. Two themes run through the book. One is an argument against the claim that Holcot was an intellectual skeptic. The other is Holcot's "profound pastoral concern for the human pilgrim" (16), which, the authors believe, is "the most reliable hermeneutical key to interpreting his thought" (14).

Chapters one through five take up issues raised in Holcot's scholastic works, those texts written within a "university setting", and primarily in his commentary on the Sentences of Peter Lombard. The (often polemical) topics covered are Holcot's "covenantal theology", his views on the nature of faith, human knowledge, and divine foreknowledge, and finally what he has to say about the sacraments, specifically baptism, confession, and the Eucharist. Much of this material is complex and abstract, but the authors take care to explain terminology and to place Holcot's arguments within their intellectual context. The authors thus seek to show both the broader conversation in which Holcot was engaged and the contribution he made to this conversation. They assume no prior knowledge of these debates. Within these chapters the authors emphasize again and again that Holcot's primary concern was not with argument for its own sake; rather the themes in his scholastic works "are representative of a lifelong pastoral concern for the simple believer within the economy of salvation" (41). They also argue persuasively that Holcot did not "dismiss the value of rational investigation" (123); rather he sees this investigation as "the obvious result of a genuine desire to know God" (123).

Chapters six through nine explore Holcot's biblical commentaries, beginning with a chapter on the biblical commentary tradition. The authors point out that Holcot wrote the biblical commentaries for "an audience of preachers or potential preachers", those who "dealt firsthand with the contigencies of human life" (125). Thus Holcot's primary interest in the biblical texts is moral and instructive. Holcot's commentary on the book of Wisdom was a medieval best-seller, extant in at least 175 manuscripts, so his method did prove useful for his fellow friars and many others. One of the fascinating features of Holcot's commentaries is his development of "verbal pictures" which were used primarily as mnemonic devices, not only for preachers but also for their audiences. These verbal pictures became a central feature of fourteenth- and fifteenth-centuries preaching.

The authors end their exploration of the commentaries with a chapter on Holcot's political philosophy, a philosophy one can infer from his commentary on Wisdom, a book that Holcot saw as about "a particular type of moral wisdom acquired in society through the governance of wise rulers" (162). For Holcot, then, Wisdom is "first and foremost a political treatise" (189), although not a systematic one. This chapter explores Holcot's views on the necessity of laws, on justice and equity, and on the centrality of the family for the common good.

The last three chapters turn to Holcot as preacher, opening with a chapter that offers a clear and succinct overview of late medieval preaching. This overview includes discussions of the occasions on which sermons were preached, their audiences, the complex structure of the "modern" sermon style, and (briefly) the pastoral material found in medieval sermons. The authors also discuss the preaching manuals and aids that became popular after the Fourth Lateran Council, of which Holcot's Moralitates, the subject of chapter eleven, is one. The Moralitates is a collection of exempla, consisting of classical stories that are then "moralized". In chapter eleven the authors give examples of four such moralized stories. The book ends with a brief chapter titled "Holcot as Preacher", which looks primarily at one of five manuscripts in which Holcot's sermons are extant, a collection of 119 Latin sermons that follow the Church year. The authors argue that the sermons "present a refreshing entry point into [Holcot's] thought" and reveal Holcot's christo-centric theology and "emphasis on human redemption" (253).

The authors close the book by noting that Holcot died during the plague, spending his last days attending to its victims, living out his Dominican calling to the end of his life. The authors thus end their book by reiterating its central claim: that Holcot was a Dominican friar, concerned with the care of souls, and all his thought, as abstruse as it may sometimes appear, reflects that "simple fact" (215). Robert Holcot is a thorough and thoughtful investigation into the literary works of a fascinating intellectual and dedicated preacher of late-medieval England. While written primarily for students and others who have little prior knowledge of the debates of this period, the book will also be of interest to scholars of medieval scholasticism, theology, and preaching.