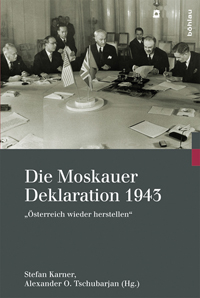 As Wikipedia helpfully points out, four declarations were published after the 1943 meeting of the foreign Ministers of the Soviet Union, USA and Britain in Moscow. That the editors of this volume are only interested in the four-paragraph "Declaration on Austria", which was barely discussed in Moscow, puts them in the same boat as most of the Austrian public and many Austrian historians. This could be dismissed as understandable Austrocentrism were it not symptomatic of a deeper problem: a focus on Austrian statehood which blocks off almost any examination of what the declaration called Austria's "responsibility...for participation in the war on the side of Hitlerite Germany". After all, only a few hundred kilometres from where the diplomats were talking Austrian soldiers were fighting not just "on the side of" the Wehrmacht and SS but as an integral part of them. Their deeds and misdeeds were the subject of a "Declaration on German atrocities", which proclaimed the Allies' determination to bring the perpetrators to justice. Readers of this collection will search in vain for any reference to this "other" Moscow Declaration and will find only hints that Austrians might have been involved in the atrocities it referred to.

The main responsibility for this skewed perspective clearly lies with the Austrian co-editor Stephan Karner. His own chapter successfully transforms Austrian participants in Hitler's "war of annihilation" into victims of Bolshevism. Initially he includes in a list of possible explanations for the resistance of 135,000 Austrians POWs to "antifascist reeducation programmes" their "education" and "previous political influences" but rather than exploring this he declares ex cathedra that most Austrian prisoners could only imagine the reestablishment of a democratic Austria without Soviet and Communist influence. Their imperviousness to Soviet propaganda then mutates into democratic and patriotic resistance and before long we learn that the prisoners with a few exceptions became opponents of the Soviet system because they experienced a gulf between ideology and "Realsozialismus" (183). This thwarted Soviet plans to return them to Austria as indoctrinated "herolds" of its communisation.

Fortunately Karner's selectivity is not reflected in all the other contributions. Many of them deal with the themes which dominated at Moscow: winning the war and maintaining unity, at least in public, as manifested in the "joint four Nation Declaration" (China was also included). The relatively harmonious climate in Moscow paved the way for the Tehran Conference and the establishment of the European Advisory Commission.

Other chapters discuss Allied strategy for post-war Europe and Austria in particular, with Soviet policy and Soviet archives given particular coverage. Though the findings may not take us much beyond existing state of knowledge they do usefully confirm some basic points: a reversal of the Anschluss was seen as essential to weakening Germany; Churchill's idea of a Danube federation was successfully blocked by the Soviet Union. That still leaves plenty of uncertainty about what, if anything Stalin thought of Austria and the Austrians. His later statement that Austrian soldiers were not "fighting like tigers" like the Germans clearly fitted his political aims, on the other hand Walter Iber and Peter Ruggenthaler argue (89) that he thought of Austria as "mainly inhabited by Germans".

Soviet occupation policy in Austria (discussed here by Vladimir Švejcer) reflected the ambivalence of its legal status. On reaching Austrian territory Red Army soldiers were surprised to be ordered to differentiate between the Austrians and the German enemy (the implication was that no restraint needed to be shown to the latter). Barbara Stelzl-Marx shows the attempts by the Red Army command to enforce the distinction were a hopeless battle. Mass rapes and other depredations lost the Soviet Union what slight chance they might have had to win over Austrian hearts and minds by demonstrating the superiority of Soviet over "bourgeois" culture.

By contrast, Soviet determination to extract maximum economic resources was laid down from the top. Its implications for Austria's economic future were potentially disastrous, as Iber and Ruggenthaler explain. Yet it is not hard to see why the Soviet government felt entitled to claim those assets which had been harnessed and expanded for the German war effort.

The interlinked issues of Soviet claims and Austrian responsibility soon moved to the centre of the post-war Austrian diplomacy. The state-sponsored propagation of the myth of Austria as a collective victim became part of what Günter Bischof has called as the instrumentalisation of the Austria Declaration. Here he broadly maintains his earlier position, in line with Robert Keyserlingk's rather reductionist view that the declaration was meant only as an instrument for encouraging Austrian resistance. [1] But, like Siegfried Beer's discussion of British policy, he also takes account of the more nuanced interpretation recently advanced by Peter Pirker, who shows i.a. how overoptimistic British assessments of resistance potential fed into the declaration. [2] The extent of this misjudgement is shown here by Gerhard Botz and Brigitte Bailer-Galanda. Botz stresses that Austrian participation or acceptance of the Nazi regime included many who fought "practically with the same sacrifice and sense of duty as the Reich Germans, right to the end" (131). Even many who were hostile to the Nazi regime or became so as it headed to the abyss, saw little reason to risk resistance when they knew that Austria was to be treated as a quasi-liberated society. Bailer-Galanda argues that precisely the isolation of resisters makes their achievement all the more impressive. It also made post-war Austria a "hostile environment" for them and returning victims (166).

At this point the argument moves along well-worn "realist" tracks; even if a part of Austria's immediate post-war elite had been anti-Nazi, they supposedly had to adapt to the reality that the bulk of Austrian society was not. Helmut Wohnout relates this point to Austria's first post-war chancellor Leopold Figl, who had been a prisoner in Dachau and saw himself as personifying an anti-Nazi Austria. Shortly before the signature of the State Treaty in 1955 he succeeded in having a reference to Austrian responsibility removed from the treaty's preamble. But this diplomatic sanitisation did not remove the underlying tensions between Austria's anti-Nazi legitimation and the indulgence shown to many former Nazis. They resurfaced with a vengeance in the 1980s controversies over Kurt Waldheim. Nevertheless Bischof is surely right to argue (252) that since then Austria's "ice age" has started to melt.

The overall verdict on this collection must be that despite some important contributions it is seriously flawed by its pervasive austrocentric self-congratulation (exemplified by the contributions no fewer than five retired ambassadors to a vacuous podium discussion). It is to be hoped that the more critical interpretations which are struggling to emerge here will at some point lead to a more interesting book. If they do they will perhaps not just integrate the "other" Moscow Declaration but also fill in some basic research gaps; for example (as pointed out by Brigitte Bailer-Galanda), the question of what impact the Moscow "Declaration on Austria" actually had on the Austrian population.