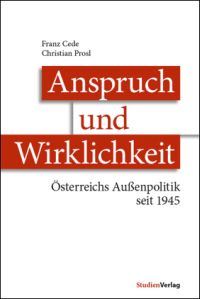 The tension implied in the title of this examination of Austrian post-war foreign policy should not be taken too seriously. This book does not offer anything like a rigorous exploration of the conflict between idealism and Realpolitik, even one limited to the view from Vienna's Ballhausplatz. What it does offer is a readable exploration of the successes and failures of Austrian diplomacy since the war. Its main thrust is that, despite some setbacks Austria has generally 'punched above its weight' on the international stage and in some areas (for example human rights policy) succeeded in doing good in difficult circumstances.

This conclusion may or may not be true, but the lack of a substantive engagement with scholarly or journalistic controversy - the book is unencumbered by a single footnote - does not make it more convincing. Its 30 short chapters give the impression of being a series of discrete briefing papers, explaining particular policy areas, geographical areas or bilateral diplomatic relations. These are sometimes interesting but sometimes a little bland.

At the start the authors declare their intention to offer to the Austrian public a survey of Austrian policy, which is informed by the authors' own experiences as career diplomats. (Cede was head of the International Law Section of the Foreign Office from 1993 to 1999 while Prosl was Austrian ambassador in Berlin 2003-2009 and in Washington till 2011). It is noticeable that at particular points, presumably where personal memories play a role, the pace quickens and the tone becomes more committed. One example is their defense of Austrian foreign policy preceding the break-up of Yugoslavia which seeks "in the interest of historical truth" to "finish with the widely held legend, that Austrian foreign policy shares responsibility for the collapse of Yugoslavia ... by its support of separatist aspirations in Yugoslav republics' ("der weit verbreiteten Legende aufzuräumen, dass die österreichische Aussenpolitik [...] durch Unterstützung der separatistischen Bestrebungen in den jugoslawischen Teilrepubliken eine Mitverantwortung für den Zerfall Jugoslawiens trägt.", 83-84). In reality, they argue, the Foreign Minister Alois Mock simply realised more quickly than his western colleagues that Yugoslavia federation would not survive (83-85). Again, this may or may not be true, but it is disappointing that the authors offer no evidence (much less a source) for the myth they claim to be demolishing.

Another controversy, which clearly left a lasting impression were the sanctions imposed by the EU in 2000 after the formation of Austria's 'Black-Blue' (People's Party ÖVP - Freedom Party FPÖ) coalition government. The authors see the measures as a 'marginalisation' ("Ausgrenzung") which was "one of the most bitter experiences of Austrian foreign policy" (96- 97).

The history of the period preceding the authors' own experience is not always convincing. The gist of their account of Austria's post-war dealings with the legacy of National Socialism is that mistakes - more of omission than commission - were made, but they were satisfactorily dealt with in the end. Foreign reactions are described as generally over the top or derived from knee-jerk ignorance. British attitudes, for example, supposedly reflect a "clichéd image of Austria" ("klischeehaften Österreich Bild") which inflates the importance of the legacy of pan-Germanism, anti-Semitism etc. (132). In reality they argue, Austria's relationship to Germany 75 years after the Anschluss is no longer overshadowed by the past as it was in the 1990s. [1]

Conventionally but incorrectly, the authors' account of post-war diplomacy sees Austria, with its sovereignty curtailed, pitted against all four occupying powers. That overlooks the way Austrian foreign policy benefitted from East-West tensions to move out of the shadow of National Socialism. One central example is the post-war dispute over allocation of German external assets. Though the authors here rightly note the more favourable disposition of the three western occupiers powers compared to the Soviet Union, they misunderstand the nature of the dispute when they claim that German assets "were considered those assets which had been taken from Austrian owners during the Anschluss period". ("Als 'Deutsches Eigentum' galten jene Vermögenswerte, die während der 'Anschluss-Periode' vom Dritten Reich den österreichischen Eigentümern gewaltsam weggenommen worden waren.", 27) If that had been the case the Austrian government's position would have been clear-cut, since the exclusion of forcible transfers from German assets was agreed in principle by all sides. The problem was finding an agreed definition of post-Anschluss asset transfers in a society and economy which had been so thoroughly integrated into the Greater German economy. Otherwise the authors repeat the conventional narrative of Austria's path to "perpetual neutrality" and the State Treaty of 1955, which they describe as the "highpoint" ("Sternstunde") of Austrian diplomacy (26). What followed, under Kreisky, Kirchschläger and Waldheim was a golden age for Austrian neutrality, with detente presenting a "window of opportunity" which Austrian decision-makers successfully exploited (32). However since 1989 neutrality has been "hollowed out and emptied of meaning" ("ausgehöhlt und sinnentleert") but because its continued popularity, dropping it is a Tabu subject (35).

The book closes with eight concrete recommendations. These include the proposal that the Austrian Foreign Ministry should act as a Barometer of international developments and make regular analyses of current international problems available to the public: that Austria should play a more prominent role in the EU; that it should be involved more intensively in peaceful solutions for migration and cultural interaction and conflict; and more involved in the international protection of human rights and mediation; it should increase its budget contribution to development collaboration.

It is difficult to argue with any of these (though a further proposal that the foreign ministry should not leave international financial and economic issues to finance ministry would presumably trigger some resistance in Vienna). And it would be churlish to deny that Austrian diplomats have done good work at many points of the globe, when they were able to. Elsewhere they have, like many others, allowed evil regimes to flourish in the name of Realpolitik.

In end this slim volume is too discreet to be a tract or a clarion call and too slight to be a comprehensive survey. It may therefore be doubted if it will achieve the aim of educating Austrian citizens about its country's post war achievements, current position or future potential.