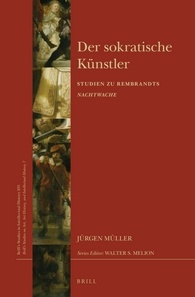 Jürgen Müller must have a highly sensitive meter for irony, since he finds so much of it in the works of his favorite artists: Bruegel and Rembrandt. Müller, professor at the TU Dresden, has been publishing on those artists for almost a quarter-century; his important contributions fill two pages in the bibliography of the book under review, which draws on his own Rembrandt studies since 1999. He is well known for probing and original interpretations of both Bruegel and Erasmus, often in light of the ironic rhetoric of Erasmus of Rotterdam, and this book adds a keystone to his ongoing project of reading major artworks of the Netherlands through the lens of Erasmus.

Müller begins, appropriately, with a Rembrandt drawing of 1644, a biting Satire on Art Criticism (Robert Lehman Collection, Metropolitan Museum, NY). There the critic appears with ass's ears as he pronounces about a framed picture before a crowd; however, in the opposite corner of the drawing the artist himself comments by defecating and by casting a knowing outward wink at the observer. Müller sees this response by Rembrandt as a clear, if private rejection of contemporary classical norms and theories, particularly those advanced by Franciscus Junius in De pictura veterum (1637; Dutch translation 1641) and exemplified by Rubens. Building on important scholarship by Jan Emmens and Ernst van de Wetering and noting how Rembrandt also consciously refers to imagery of the Calumny of Apelles, he introduces the drawing as the most explicit commentary by Rembrandt about his views on art. Müller carefully shows that Rembrandt does not overtly parody canonical works but uses them with ironic self-awareness to produce understated satire, not easy to discover. This outlook culminates in Müller's longest discussion, Chapter Four, interpreting the title picture, the Nightwatch (1642; Rijksmuseum, Amsterdam). But Müller also claims to discover such irony in the early and late phases of Rembrandt's œuvre.

Chapter One traces Romantic myths about the artist during the nineteenth century, enhanced by the notorious, wildly popular book by Julius Langbehn, Rembrandt als Erzieher. Reversing negative contemporary assessments of the seventeenth century, Langbehn characterized Rembrandt's life as tragic but also self-sacrificing and fully individual, offering a modern, heroic Germanic soul to place between Luther and Wagner. This view set the tone for a Nazi film of 1942 by Hans Steinhoff (yet Müller, a noted film historian, nevertheless neglects another Rembrandt "biopicture" of 1936 from Hollywood, directed by Alexander Korda and starring Charles Laughton as the painter with a similar tragic biography). Such views of Rembrandt as heroic and prophetic also still colored twentieth-century art history.

Chapter Two characterizes Rembrandt's art not as heroic or tragic but rather as an ars humilis, in the positive Christian sense (and Erasmian, quoting the familiar adage of the Silenus of Alcibiades on the deceptiveness of appearances), aware of life's brevity. Müller closely considers technique, including Rembrandt's celebrated dramatic sharp lighting, tied to the suddenness of events and appearances. Also significant are the shifting roles of Rembrandt in his self-portraits.

Chapter Three, on "Silenic images", examines departures from conventional thematic norms and a variety of adaptations, usually hidden, from classical or Renaissance models, again in resistance to Junius and the prescription to aemulatio. Those include some obvious ironic parodies, such as Ganymede as infant (1635; Dresden), but also more ambiguous depictions, chiefly the biblical scene called the "Jewish Bride" (ca. 1666; Amsterdam). The Laocoön group prompts a variant in Rembrandt's distinctive techniques for his most horrific image of suffering: the biblical Blinding of Samson (1636; Frankfurt). Müller also uses these exceptional adaptations to offer a critique of the history of types and the usual iconographic interpretive method of art history in favor of the context specifics of images.

But the core argument of the book unfolds around a concluding interpretation of the Nightwatch. Here Müller notes that the basic structure of dynamic figures beneath and before a towering archway derives from Raphael's Vatican School of Athens, known through prints. Even the gesture of the commander comes from Raphael's Plato but is also marked as privileged by the glove and rhetorical gesture as a call to begin a speech. This group image has been seen as an evocative mustering of a local Amsterdam militia company, gathering muskets, pikes, and banners and responding to the command of the captain and his lieutenant. Müller, however, closely observes details that he uses to build an interpretation that subverts the positive harmony of the whole, perceived by almost all observers. He notes that the children in the group, normally interpreted as allegorical insertions, do not behave with decorum: the small boy with the enormous helmet behind the captain has discharged his weapon in the midst of the group; two small girls near him more closely conform to the unsavory but essential role of camp followers. These juniors Müller reads as a group of awkward imitators of proper adult conduct. Even the adult figure in red, loading his weapon at the left, appears unsteady, even drunk (Müller even claims that both he and the critic in the 1644 drawing derive from the portrait of Franciscus Junius, which every observer will have to evaluate personally).

A reviewer is faced with the dilemma of acknowledging that Müller points out real details that have been overlooked or problematic until now, despite the serious group commission for a company portrait. Müller admits that the painting can be read on two levels, one straightforward and serious, the other ironic and comical. He seems very quick (as in Chapter Three) to find adaptations of specific classical statuary through their shared body poses, though if Rembrandt did take an ironic stance regarding Junius, such parodic (not ironic) reconfigurations would be truly meaningful. Even the shadow cast by the captain's gesture is linked (294) to a passage in Junius about false imitation by cast shadows and to a Pliny reference (296).

This observer, however, finds it illogical to view the Nightwatch - a commissioned group portrait, after all - chiefly as this kind of pictorial jujitsu, using classical art theory against itself, to point out its potential contradictions in this new context. And despite borrowings, it seems strange to read the painting chiefly as a sustained dialogue with Raphael per se, whether as imitation or as aemulatio. Would viewers also have recognized the supposedly prominent reference here, especially if used for a satirical purpose, specifically, to counter the likes of Franciscus Junius?

But as Müller points out, the specific historical weapons and uniforms provide an alternative model to classicism in "history painting", let alone in contemporary militia group portraiture. Here, too, the use of lighting enhances the sense of the momentary and ephemeral, of shots and shadows, which seem quite appropriate for these modern, mortal pseudo-heroes, instead of classic models.

Overall, this book, like everything written by Jürgen Müller, offers fresh thinking and close observations, which challenge received wisdom. The general argument gives way at times to a more helpful sum of individual parts. The book is more a collection of separate essays assembled on individual works than it is a sustained dialectical critique of Junius. Ultimately, Müller combines his recurrent Erasmian irony with a reformulation of Emmens's view of an "anticlassical" posture by Rembrandt. His own rhetorical approach forms the wellspring for these close and provocative re-examinations of important individual images, much richer discussions than can be addressed in a brief review. This book should lead the thoughtful reader to return to Rembrandt (or Bruegel) for informed, renewed close inspection.