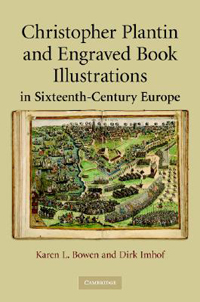 One of the continuing problems in the early history of prints remains the lack of attention to printed books, partly because they are located in their own special library collections instead of available in print rooms. Moreover, since so much of the history of prints is driven by the names of famous designers, frequently the anonymous illustrators of books get neglected. Of course Dürer's long activity as an illustrator provides an exception to this tendency, while only reminding us how often the works of even famous printmakers gets lost when their works lie between the covers of a book.

Most early illustrations, especially in incunabula - books of the first half-century of printing - were woodcuts, because the same kind of press was used for the movable type as for the woodblocks of the images. Engraving required a roller press and also generated fewer impressions, although of greater refinement. In the second half of the sixteenth century, however, both in Rome and in Antwerp, the professionalization of engraving by specialists made the production of such prints much more efficient and cost-effective, even for publishers to illustrate books with them. The story for Rome has recently been published by Christopher Witcombe, Print Publishing in Sixteenth-Century Rome (Turnhout 2008; published simultaneously with this book, so not referenced), but the main printer-publisher there, Antonio Lafreri, pales in comparison to Plantin (20 volumes versus some 115).

Now Bowen and Imhof richly complete this historical picture with the leading printer of the century: Christopher Plantin of Antwerp, active from 1555-1589. The story of professional print publishing in the city already has firm foundations in the study of Hieronymus Cock and the firm Aux quatre vents by Timothy Riggs (1977), his successor Philips Galle by Manfred Sellink (1997) and Jan van der Stock, Printing Images in Antwerp (Rotterdam, 1998). These authors are well suited for their task and have published numerous articles prior to their book. Imhof, Curator of Rare Books and Archives at the Plantin-Moretus Museum in Antwerp, has unparalleled access to the extensive records of the publishing firm, and Bowen is a trained print historian with a focus on Plantin; her earlier book considered his printed books of hours. Together, they were able to study both the books and plates themselves as well as the archives to produce this uniquely rich study. The firm foundations of their research are evident immediately from four appendixes: 1) Artists who worked on Plantin's intaglio illustrations; 2) Plantin's price calculations; 3) Plantin's sales of illustrated editions; 4) inventories of Plantin's stock of copper plates; 5) editions with intaglio illustrations made by Plantin for others. Taken together, these data suggest not only the processes of production at the printing house but also the likely market and audience for such works with intaglio illustrations.

The first two chapters set the stage for the in-house analysis. First the authors trace an earlier history of intaglio illustrations for books, rare but not unprecedented (they omit the Lucas Cranach engraved frontispiece of Frederick the Wise in prayer for that patron's relic collection book, 1509). Then they introduce Plantin as well as his designers and engravers, part of the great expansion of quantity and consistent quality after mid-century in Antwerp. While these names might often be known to printroom curators, they still are largely unfamiliar to art historians more generally, but they were part of a business with printing presses like the book business of Plantin, the Golden Compass. Most of the engravers had personal ambitions for their own print houses and did not remain long with Plantin.

Because of the higher costs involved in producing and printing engravings, Plantin needed financial backing to begin such ambitious projects. His influential friend, Benito Arias Montano, sent from Spain to work on the renowned Polyglot Bible project (1568-73; which also had a score of engravings), also brought in a financial backer, Luis Perez, a wealthy Spanish merchant in Antwerp. The firm's archives reveal a later deal with Perez who received advance copies at wholesale. But the production itself required a new efficiency, which Plantin achieved with the help of the workshop of Mynken Liefrinck, widow of Frans Huys, his first engraver (the authors note earlier her family connection to print publishers Willem and Hans Liefrinck, father and brother, 55). The first publications with engraved illustrations: Hours of the Virgin (1570) and Montanus's own book, Monuments of human health (1571). Documents reveal that Paris, scattered dealers, and the court of Philip II of Spain provided the main purchasers of the former, while the latter had a local who's who list as well as sales in Frankfurt and Paris.

From these early projects Plantin began to work to satisfy the new demand for liturgical books - missals, breviaries, and books of hours - occasioned by the Catholic Reformation, as generated by the decrees of the Council of Trent (1563). Once more the impetus to a more luxurious edition with engravings stemmed from the orientation to the Spanish royal court. During this second phase, however, Plantin developed a new pricing scheme, graduated according to added features, such as engravings, especially with the complexities of registration of the image on the page.

During the 1580s, Plantin's last decade and a turbulent period in Antwerp history, he still produced a grand Bible with engravings (1583) plus other religious books, such as a religious tract by Petrus Canisius but also non-religious works, such as Lodovico Guicciardini's Description of the Low Countries and the triumphal entry of the Duke of Anjou (1582). Plantin still worried about securing the services of capable engravers and coping with rising costs. One cost-saving solution was to switch to the cheaper, more efficient medium of etching, also used for contemporary maps. But etched plates were not as durable as engraved plates, so Plantin's successor, Jan Moretus, reverted to the earlier model. Other cost-saving measures included reusing plates or producing separate sheets for the images, which also permitted selling some books more cheaply without added illustrations. Finance and practical considerations helped shape artistic production. Indeed, the final chapter discusses Plantin prints of texts for other illustrators' editions, especially print publisher Philips Galle or his friend, atlas-maker Abraham Ortelius; those associates remained the main producer of their projects and subcontracted Plantin. This kind of friendship-based business network resembles the way that Brussels tapestry firms cooperated with associates in the same industry in the next century, as revealed by Koen Brosens.

In both text and Appendix, Bowen and Imhof examine the book sales of the Golden Compass firm, a data analysis largely unprecedented in book history. They even count carefully the number of actual impressions obtained from one set of engraved plates, 4071, whereas etched plates, lasting only around 3000 pulls, had to be reworked or replaced. Such attention to detail enriches all discussion of the larger issues analyzed here about book and illustration production: publisher, artists, marketing, and audiences. Their book, both broad and deep, takes its rightful place alongside the two other great studies of its component parts, Leon Voet's study of the firm itself (1972) and Jan van der Stock's survey of all forms of printmaking in sixteenth-century Antwerp (1998).