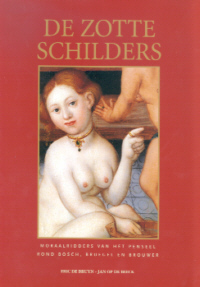 For the study of Netherlandish paintings, these have been remarkable times. Thoughtful exhibitions have been staged recently in smaller, regional museums across Northern Europe. First came the investigation of "Brueghel Enterprises" (Peter van den Brink, ed.; Maastricht, Bonnefantenmuseum, 2001), the production of replica images by the workshop of Pieter Brueghel the Younger. Then "Kein Tag wie jeder andere", a study of "Fest und Vergnügen", circa 1520-1630 (Silke Gatenbröcker and Andreas Vetter, eds.; Braunschweig, Herzog-Anton-Ulrich-Museum, 2002). Now, the spirited leadership in Mechelen of Jan Op de Beeck, assisted in an essay and catalogue entries by Eric De Bruyn, as well as a chapter by Ward Peinen, offers an investigation of "moralizing" painters and their satires in the Netherlands during the long sixteenth century. This analysis makes particular contributions to the discussion of cultural conditions for such pictures by offering literary evidence of shared iconographic attitudes. While those arguments are distinctly Netherlandish in language and content, this catalogue also provides assistance to foreign scholars by appending summaries in French, German, and English.

In many respects, the exhibition builds upon the fundamental insights of Paul Vandenbroeck, whose studies of Bosch and of the Verbeecks in Mechelen have argued that middle-class audiences for pictures and literature imposed the value systems found in what are essentially satirical images. In his introduction Op de Beeck makes a distinction between these moralists, whose art can be compared to the "crazy" ("in het zotte") satirical verses by contemporary urban "rederijker" authors, and later Dutch and Flemish painters of "genre" scenes. He claims that the latter painters offered a much less satirical moral message in their works (While this view can be challenged, even some of the extended individual careers, such as those of David Teniers or Adriaen van Ostade, do seem to move away from their initial, dingy worlds of shabby taverns toward increasingly picturesque and prosperous scenes of peasant pleasures). De Bruyn's essay on Bosch and his followers acknowledges the contributions of Vandenbroeck but properly notes that Bosch's wide influence and numerous imitators (and forgers) continued his worldly iconography well into the sixteenth century. The Boschian vocabulary of ugliness and monsters serves to teach moral lessons even while offering occasional mirth. Peinen also discusses contemporary vernacular profane songs, some of them featuring ribald content and festive excesses, which he links to the exaggerations of the pictures in this exhibition.

Mechelen looms large in the other essays. Op de Beeck reminds us that Pieter Bruegel's earliest commission is documented as the side wings of the altarpiece of the local glovemakers' guild in St. Rombout's (1551, with Pieter Baltens responsible for the center). He also reprises the connection, first made by Simone Bergmans, of Mayken Verhulst, Pieter Coecke's widow and a Mechelen native, with the Brunswick Monogrammist, whose influence on Bruegel was so fundamental (One could also note the later echoes of Bruegel's own work in the output of Hans Bol of Mechelen). The Verbeeck family of watercolour drolleries had already become established locally and offer a precedent for the ongoing Bruegel workshop.

The pictures themselves, arranged in chronological order, offer few masterworks, but many surprises. Most hail from private collections in Belgium and have only rarely been displayed. A few oddities are included, such as a "Bathhouse" by the German Hans Baldung (no. 4), and several pictures are anonymous. Quite a few images by the Verbeeck dynasty (nos. 5-8) are joined with Jan Massys (nos. 9-11) and Maerten van Cleve (nos. 12-13) at the core of the exhibition, displaying of these group subjects. Seventeenth-century artists provide a conclusion: Craesbeek (no. 27), Van de Venne (no. 31), and Benjamin Cuyp (no. 32). However, virtually all paintings in this exhibition are unsigned and assigned by attribution, often to the wider workshop. Yet the range of subjects includes Bosch spin-offs of hell scenes and temptations of saints, as well as secular subjects: peasants, fools, merry company, old women, tearful brides, drunkards.

At the end of the exhibition Van de Venne's ragged chimney-sweep can only offer a lone, discarded mussel-shell to wipe the arse of another unfortunate. This image of utter poverty, without relief, echoes the century-long efforts of Flemish artists to provide any consolation - other than outright exposure of folly and moral ugliness - in a loveless, miserable, evil-filled world.