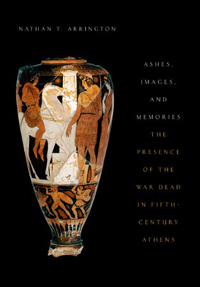 This is a scholarly and stimulating investigation of commemoration of the war dead in Classical Athens, which not only provides an excellent (and much-needed) analysis of the current state of knowledge about the Athenian patrios nomos, but also argues for a new way of understanding the relationship between those practices and the wider context of Athenian approaches to the commemoration of death and war. Arrington's focus is on the archaeological and iconographic evidence for Athenian behaviour and beliefs, and he brings together an impressive range of material to shape a rich picture of both collective and private attitudes to death in war in the fifth- (and early-fourth) century city.

The first part of the book focuses on the collective burial and public commemoration of the Athenian war-dead. Here, Arrington tackles some long-standing problems about the details of these ceremonies and monuments, and comes up with some convincing solutions. The date of the origins of the patrios nomos, in the form described by Thucydides at 2.34, has long been disputed (a debate not helped by inconclusive material evidence, and Thucydides' unhelpful aside about the unusual treatment of the fallen of Marathon), but Arrington develops (in Ch. 1) a nuanced and persuasive argument about the development of Athenian practice: he emphasises (surely correctly) that it is unlikely that all elements of the collective burial were instituted at the same time, but suggests that the core of the ritual - the cremation, repatriation and collective burial of the dead - was established by around 500 B.C., and should be connected most closely with the Cleisthenic reforms, and with earliest stages of the Athenian democracy.

The second chapter moves on to consider the topography of the public burials, and here too Arrington's arguments are both persuasive and important. On the basis of the archaeological evidence above all, he makes the case for seeing the demosion sema as, on the one hand, a dispersed space (rather than the strictly delimited 'cemetery' which modern commentators have sometimes imagined), but, on the other, a space characterised by clustering of graves around particular monuments. (The graves of the tyrannicides and of the Marathonomachoi would, Arrington suggests, have acted as focal points for the other burials in the area.)

In this chapter, and in the following one (which concentrates on the physical appearance and iconography of the collective graves), Arrington attempts to pin down the ways in which these burials, and the monuments associated with them, shaped the collective memory of the war-dead. The graves, he argues, commemorate - through their iconography, and through the language of their epigrams - the process of struggle rather than its outcome, and so contribute to a civic ideology which places a premium on collective endeavour; this ideology, for Arrington, is not necessarily democratic (or indeed elitist), but rather one which 'enabled mass and elite to work through their place within the democracy' (103) - an appealing (if perhaps rather optimistically Oberian) view of Athenian society, but one which inevitably remains rather imprecise: evidence for exactly what that process of 'working though' might have looked like in practice is frustratingly scarce.

In the second half of the book, the process of collective burial is placed in its wider (spatial and cultural) setting. Ch. 4 keeps the focus on collective commemoration, but takes us out of the funerary context and into sacred space. Arrington draws attention to the representations of combat, and in particular of violent death, on a number of prominent sacred buildings (the Parthenon, the Hephaisteion, the temple of Athena Nike), and suggests that these representations should be (and were, by the fifth-century Athenians) seen as closely connected to the commemoration of the 'real' war-dead, whether through the shared use of common mythological themes or through allusion to actual historical events; he argues, for example, for a connection between the contested treatment of the casualties of the Battle of Delion and the representation of the recovery of the dead on the Athena Nike frieze.

The picture of commemoration and the shaping of memory which is proposed in this chapter (and the preceding ones) can seem quite centralising, even dictatorial. Arrington suggests that we should see the process rather as one of a 'bottom-up development of shared assumptions' (177) rather than a top-down imposition of an external ideology, but the end result is still one which focusses strongly on the needs and objectives of the community as a whole ('an emerging ideology that death for the city was beautiful, desirable and necessary': 177). Moreover, this is a form of commemoration which leaves little space for private memories - which perhaps even positively contributes to the effacing of private memory (an interesting argument raised towards the end of Ch. 3). But the remainder of the book offers an important corrective to that view, by turning to consider forms of 'private engagement with civic death' - through the erection of monuments to those who performed major military services to the city (discussed in Ch. 5), through the use of military imagery on private burials (Ch. 6), and through the rituals of commemoration (and approaches to death and mourning) hinted at in the use and iconography of white-ground lekythoi (Ch. 7).

What is demonstrated in these chapters is both the scope of private commemoration of death in war, and the variety of ways in which that commemoration took place. Arrington shows how some commemoration engaged very closely with the forms and assumptions of the collective commemorations, to the extent that death in war becomes a theme - implicit or explicit - even in the commemoration of prominent individuals who had (to borrow Sassoon's phrase) 'refrained from dying' in the service of their city. But he points, too, to forms of commemoration which 'verged on the subversive' (217, of the iconography of some Athenian loutrophoroi), as well as approaches which diverge entirely from the collective emphasis on death in war as the glorious ideal, focussing instead on the sorrows of death and loss.

Some parts of Arrington's analysis might not persuade everyone: any attempt to recreate ancient emotions or experience - no matter how well-grounded in theory that attempt is - involves an inevitable element of subjectivity, and some of Arrington's claims about ancient responses to the monuments or images he analyses seem at times too willing to sweep that uncertainty to the edges of the picture. Arrington asks, for example, 'what Athenian could have seen a Greek succumbing to an Amazon and not thought of the Marathon monument?' (148); I would not deny that some - or even many - Athenian viewers might have made such a connection, but can we go so far as to say that every Athenian's thought processes would have worked in the same way? But if individual stages of the argument sometimes run the risk of seeming a bit too dogmatic, the overall picture is much more nuanced. One of the important achievements of this study, and a reason why it needs to be read as a whole, rather than dipped into chapter by chapter, is to show how complex and varied Athenian responses to death in war were, and how symbiotic the relationships between private and public, collective and individual, commemorations of the fallen.