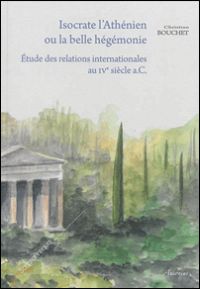 Why should we read Isocrates? The author has never enjoyed the highest reputation, overshadowed as a political or moral thinker by Greece's more celebrated philosophers and as an orator by those men who actually practised their craft in the Athenian assembly or lawcourt. Bouchet offers two reasons why Isocrates' (extensive) writings deserve our attention: first, that they cover a remarkably broad period (from around 403 to 339 B.C.E., according to Bouchet's suggested datings), and so allow us to trace developments in Isocratean (and possibly also Athenian) thinking over an unusually long timescale; second, the literary quality of the works themselves.

Bouchet's focus in this volume is on the first of those themes, and in particular on the analysis of Isocrates' views on interstate politics (especially imperialism and Panhellenism) in the fourth century. His study falls into three parts, each quite distinct in their approach, but united by this common interest in the Isocratean view (or views) of the nature of relations between states.

In the first section of the book, Bouchet analyses Isocrates' depiction of interstate leadership. This question has, of course, been tackled before, but Bouchet's approach is distinctive, taking as its starting point the specific terminology which Isocrates uses to describe positions of interstate power (arche, hegemonia, and dunamis above all), and carefully analysing the usage of these and related terms. Bouchet proceeds chronologically through the speeches and letters, and is meticulous both in his discussion of the use (and non-use) of his core vocabulary set, and in exploring its relevance to the wider question of Isocrates' attitude to hegemony and empire.

The individual pieces of analysis here will be useful for anyone studying the texts which are discussed, and for those interested in the details of the language of empire (and its alternatives): one of Bouchet's very helpful contributions is to show that Isocrates' use of arche as a term is more nuanced (and much more dependent on its immediate, qualifying context) than has sometimes been thought. But some space is also allowed for drawing out some wider themes. Bouchet argues that it is possible to see a shift in Isocrates' view of interstate leadership, from one in which hegemonia is based primarily on military power, to one in which other, more 'administrative' aspects of leadership come to play a role; such a shift would run logically in parallel to Athens' diminishing ability to exercise purely military power over the course of the fourth century. Perhaps more controversial is the suggestion that Isocrates' (notorious) offer of hegemonia to Philip II of Macedon was made only in the most limited sense of the term: Isocrates (Bouchet argues) thought that Philip could exercise military leadership, but not that he could become a leader of the Greeks in any wider sense; his relationship to the Greeks (for Isocrates, at least) was that of external euergetes, not assimilated champion. Athens, for Bouchet, is and always remains at the centre of Isocrates' world; and justifying, securing or restoring the primacy of Athens is central to Isocrates' thought throughout his career.

Part II is titled 'Between War and Peace', although its coverage actually ranges more widely than that. Bouchet (rightly) rejects any suggestion that Isocrates can be labelled a "pacifist", arguing instead that his aspirations for peace between the Greek states have to be considered in the context of his enthusiasm for war (particularly war against the "barbarian"). He therefore goes on to offer a systematic analysis of Isocrates' views on various aspects of war, both its conduct (the role of generals, the use of mercenaries) and its motivation. This latter category leads, logically enough, into a very full discussion of Isocrates' views of Panhellenism, not just in its military manifestations, but also as a cultural, ethnic and geographical phenomenon.

Bouchet's conclusions here are, in a way, rather downbeat: he sees no particular originality in Isocrates' views of Greek unity (or of "barbarian" identity); rather, he suggests, Isocrates defends an idea of Panhellenism which had already been developed by earlier writers (Bouchet identifies a particular Isocratean debt to Gorgias). But he does allow Isocrates some innovation, both in reshaping (in a modest way) his own model of Panhellenism as historical circumstances change, and more specifically in finding a way to incorporate Philip of Macedon into that model, a move which Bouchet suggests - in line with his conclusions in the first part of the study - also represents a limitation of the scope of the Panhellenic project, reducing it to a more narrowly military enterprise.

The book's third and shortest section consists of an introduction to and translation of Isocrates' speech On the Peace. The singling out of this speech for special treatment is justified by Bouchet on the grounds of the speech's "densité, sa richesse thématique et la pensée politique qui y est developée" (195), and it is certainly the case that this text is highly relevant to the themes of imperialism and warfare which have occupied Bouchet in this volume. Nonetheless, the rather compressed nature of Bouchet's observations in this section mean that this part of his work will probably be of most use to Francophone readers seeking a clear, and helpfully annotated, translation of the speech.

Does Bouchet, then, succeed in demonstrating the value of reading Isocrates? It is perhaps a little unfair to conclude (in spite of Bouchet's sometimes pessimistic conclusions on the originality of Isocrates' thought) that what he has done is read Isocrates so we don't have to - although this work certainly will be useful in helping to readers to navigate round the (sometimes slightly impenetrable) Isocratean corpus, and in assisting them to set discrete parts of Isocratean writing into their larger context (both in Isocrates' own writings and in those of his contemporaries: Bouchet points to a number of interesting comparisons with Xenophon's writing, for example). Isocrates may never be the most appealing of Greek authors, but Bouchet has done much to show why his works deserve a place in any study of fourth-century interstate politics.