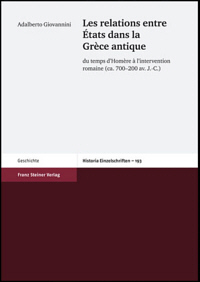 Giovannini's subject - the conduct and principles of relations between the Greek city states - is one whose widespread neglect in modern scholarship is in some ways surprising: after all, war, conflict and diplomacy dominate most historical narratives of ancient Greek activities. On the other hand, an explanation for this neglect is not hard to find: both ancient literary sources and modern scholarship have often found it hard to find much worth admiring, still less studying, in Greek approaches to diplomacy. From antiquity onwards critics have emphasised only one aspect of Greek interstate politics: constant, and apparently unsophisticated, warfare.

But, as Giovannini notes at the outset of his study, such disdain is not necessary. Warfare, of course, did play an important part in Greek interstate interaction, but that part formed only a small proportion of the whole. Moreover, he argues, the subject deserves attention not only because it has been neglected, but also because it has the potential to make a positively useful contribution to the wider study of diplomacy and international politics: the Greek states-system, Giovannini proposes, is a rare example of a truly 'pluralist' interstate society - that is, a system in which many states interact without being subject to the coercive force of a single dominant power.

Giovannini divides his study into five parts, the first two of which establish the general context of Greek interstate activity. He deals first with the scope of the Greek world, and the shared concepts that can be seen to unite it (approaches to ethnicity and identity, the role of the gods, and the moral principles which underpin Greek attitudes to hospitality, friendship and kinship). Section Two shifts the focus to the constituent units of that Greek world - the city-state above all, but also monarchies, federations and ethne. In discussing the role played by the polis in the Greek system of states, Giovannini also briefly touches on the various ways in which those city-states might interact with one another, whether by isolated diplomatic exchanges or more long-term alliances and federations.

Once the general parameters of Greek interstate politics have been established, the three remaining sections of the book focus in more detail on its practicalities. Part Three deals with the role of warfare. Giovannini explores here the reasons why, and the ways in which, a state might use war as a means of settling a dispute, as well as setting out the political and moral considerations that might underlie a decision to go to war; he investigates too some of the peaceful means by which a state might settle a conflict. Finally in this section, Giovannini charts the various rules and norms by which conduct in warfare was restrained (and suggests that many of these restraints should be seen as characteristically Greek traits, not shared by non-Greek states).

The final two parts deal, respectively, with bilateral and multilateral relations between states. In both cases, Giovannini offers an analysis of general principles, followed by a catalogue of particularly representative or significant examples. In the case of treaties and conventions (which are treated as two distinct categories), the catalogue consists of Greek texts, together with translation and commentary, and will therefore act as a useful complement to the Staatsverträge for those readers whose Greek (or German) is limited. The catalogue of leagues, alliances and federations, which ranges from the Delphic Amphictiony via the Athenian Empire to the Achaean League, offers a similarly useful survey of both historical data and modern scholarship for each case-study.

Giovannini says (14) that his aim in writing was to produce an introductory guide to interstate politics - a suitable replacement for the (important, but now long-outdated) studies of Phillipson and Martin (published in 1911 and 1940 respectively). This book certainly satisfies that aim, not only in its comprehensive coverage and clear exposition, but also in the useful guidance it provides for those wanting to explore the subject more fully: each section is prefaced by a comprehensive annotated bibliography, and the catalogues and case-studies in the final two parts provide an excellent range of 'primary' material for further study. Giovannini's integration of literary and epigraphic material is also extremely welcome, particularly since, as he notes more than once, the literary sources regularly offer a very partial, and often also very pessimistic, perspective on the conduct of interstate politics.

But Giovannini's account should not be of interest only to beginners: his analysis of and approach to questions both large and small often represent a significant contribution to ongoing debates in the field. His discussion of warfare, for example, includes a strong and persuasive case against the Platonic assertion (also adopted by many modern commentators) that war was simply the natural condition of the Greek city-state, and also provides an important corrective to the equally widespread theory that Greek warfare should be seen primarily as a form of ritualised, agonistic combat.

This freshness of approach can be seen elsewhere in the work too. Throughout, Giovannini suggests distinctive ways of dividing and characterising the various ways in which states (or individuals within states) interacted with one another. The interpersonal ties of eunoia, euergetism, kinship and so on should (he argues) be counted as categorically distinct from formal interstate agreements. Treaties (which, for Giovannini have a marked effect on the sovereignty of the contracting parties) are to be distinguished from conventions (which deal with matters less central to the sovereignty and autonomy of the polis).

Even if some of these categorisations or definitions might provoke objections, his case is always well-made, and the very process of objecting will surely lead to productive further lines of research and debate. Indeed, the basic scope of the book - the decision to extend its chronological purview from the Homeric era right down to the heart of Hellenistic period - represents an important methodological and theoretical departure. By adopting such wide chronological boundaries Giovannini sets out an important challenge to historians of Greek warfare and diplomacy: is it time to rethink the rigid periods (Archaic, Classical, Hellenistic) within which we conventionally operate, and to shift the focus of our attention away from the ruptures and turning-points of Greek interstate politics towards those things which remain stable, and towards the reasons for that stability?

In sum, this is a most welcome book, which will be of great service to students in this area and which should also provoke further research and debate among scholars in the field. Giovannini notes in his preface (14) that this book is the fruit of a longstanding research interest, and that its appearance coincides with his retirement. As such, this is a fitting testament to a scholarly career: a work full of learning and careful judgement, which will engage those just starting their study of the subject and stimulate those who are already entangled in its problems.