Mark Rosen: The Mapping of Power in Renaissance Italy 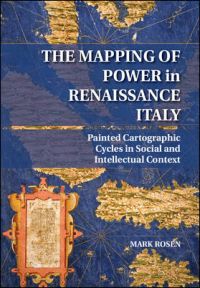 The maproom on the second floor of the Florentine Palazzo Vecchio, once the splendid centrepiece of the Medici Guardaroba (wardrobe), was for centuries threatened by neglect and finally by the inappropriate use as office space in the days when Florence was for a short while the capital of a united Kingdom of Italy. Fortunately, the palazzo and its contents were rediscovered as worthwhile objects of study by the late nineteenth century and have been in the focus of scholarly interest since at least the 1980s. The maproom alone has been discussed in several major publications, starting with Francesca Fiorani's The Marvel of Maps: Art, Cartography, and Politics in Renaissance Italy (2005). Conferences in Florence (2006 and 2012) and research on the architectural structure of the room conducted by the staff of the Musei Civici Fiorentini underpinned the importance the room once held for the Medici court and in particular for Duke Cosimo I de' Medici. Indeed, according to Giorgio Vasari's testimony the maproom's decorative scheme went back to the duke's own invention and was the fruit of his keen interest in the things of heaven and earth. His name also chimed happily with the title of the late-antique work on geography: Ptolemy's Cosmographia formed the basis of the collection of maps displayed on the doors of the wooden cabinets skirting the four walls.

While the Florentine maproom, set up after 1563, was not the only example of such a collection of maps and globes in Italy and elsewhere in Europe, not least the close connection to Duke Cosimo's personal interests and his name has perhaps been a mixed blessing, for it occasionally obstructed the line of investigation and argument. Since the room hosted objects from the ducal collections, some of which were later taken to Palazzo Pitti and then to the new Uffizi Gallery, and its decorative programme fitted closely with the schemes adopted for staterooms and apartments elsewhere in the palace, two main points have remained understudied. A detailed look at the maps themselves and the intended use of the room beyond that of mere storage / display space.

Even though cartography was not an invention of the (Italian) Renaissance, it had become a major concern in those realms bordering the Atlantic and searching for new trade routes by the fifteenth century and even more so since the Fall of Constantinople in 1453. Princes such as Henry the Navigator of Portugal (1420-60) and King John II of Portugal sent out explorers to chart the seas off the Iberian and African coasts. The more detailed and reliable the maps, the more adventurous became the explorers, convinced that the Indies could be reached by sailing West. As is well known, the Genoese explorer Christopher Columbus managed to convince the Catholic Monarchs to sponsor his expedition, which contrary to expectations led to the discovery of the New World. The Iberian kingdoms as well as France and England benefited soon from the resulting shift of European economics towards the Atlantic and the New Spain but states and principalities without direct access to the Atlantic such as Florence also took a great interest in these developments.

Mark Rosen's book, the result of many years of research in Florence and the published edition of his dissertation in art history at the University of California, Berkeley, promises to discuss the maps and to give detailed insights into the origins and uses of map cycles at sixteenth-century courts. The seven chapters of his study therefore address diverse aspects to do with the use of maps as decoration before and during the sixteenth century, the role of the Medici Guardaroba and its programme, as well as the work of the Florentine cartographers employed by the ducal court. Finally, the focus shifts onto the maps themselves and concludes with an overview of map cycles dating to the late sixteenth century.

What is important in this book's approach is Rosen's work on maps in general and on Danti's and Bonsignori's contribution to the map cycle in particular. Possibly, one of the most useful sections of the book is in Chapter Two when Rosen discusses the interest in and use of maps at diverse European locations from the late fifteenth century onwards, i.e. at Rome, Mantua, Venice and in the English realm, which puts the Florentine map cycle into context (63-89). Further non-Italian examples would have been highly desirable, although this is remedied to a small degree in the final chapter (195-209).

The Florentine map cycle has often been compared to the loggia at the Vatican (started 1561); it may well have been prompted by the papal project. We know though that it remained unfinished until after the duke's death, having to give way to other, more pressing enterprises from the mid-1560s (195-197). It never reached the completeness and splendour of Vasari's descriptions and, one assumes, Cosimo's original plans, whatever they had initially been. Had Cosimo mainly intended to do better than the pope, although by 1560 he entertained a cordial relationship with the Papal States, or to celebrate his own name and rule by installing a cosmological room within his ducal residence? It is of course possible to consider the maproom as a stepping-stone in the development of Florentine types of display cases, running from study rooms such as the Scrittoio of Calliope and Francesco's Studiolo towards the Uffizi Gallery with its adjacent Tribuna and additional chambers, including another maproom (112-123). The contents consisting of an ensemble of maps and portraits of famous men and some women can also be tied to previously commissioned projects of the Florentine Republic on the one hand (e.g. in the Sala dei Gigli) as well as to the general decorative scheme imposed on the palace's apartments since the 1550s and 60s on the other (90-112). Nevertheless, the location of the maproom directly above a chamber housing large numbers of books in diverse languages and connected to it by a system of backstairs may well suggest that princely representation and aggrandisement had never been the sole aim of this project.

Rather, one may ask, whether maproom and "library" were intended to be used in tandem as offering the sum total of geographical and historical knowledge then available to and approved by the duke, similar to what would be presented in terms of antiquarian knowledge about the ancient foundation of Florence on the soffitto of the Salone dei Cincequento. It is well known that two cartographers worked on the maps. Their styles are distinct from one another and they used diverse sets of sources during a time that saw considerable progress in the art of cartography (166-194). Nonetheless, Egnazio Danti and Stefano Bonsignori - who also created the famous printed map of Florence (1584 and 1594) - included cartouches with "historical" detail that connected early modern Florence with classical antiquity and beyond to the Biblical world of Genesis peopled by Noah and his offspring (167). Chapter Six carefully traces the changing modus operandi and "scholarship" of the two cartographers, while they were at work in Florence and during previous and subsequent commissions elsewhere. Danti, for example, went on to work for the papal map cycle at the Vatican.

Beautifully produced and richly illustrated, this study is trying to give the complete picture of an important ducal commission in the context of cartography in general and decorative map cycles in particular. The commission happened at a peculiar turning point in the duke's cultural politics as well as within the development of printed and painted maps in Europe. This dichotomy can be felt throughout the chapters and on occasion seems to pull the book apart between two goals. One cannot help but feel that it would have benefited from a more decisive line of argument from the start - and perhaps from a CD with illustrations bearing more detail than can be easily seen on a half page.