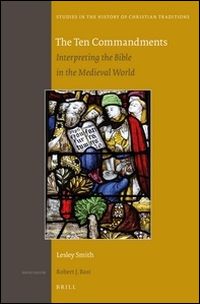 Drawing on her earlier work on Nicholas of Lyra (an influential Franciscan exegete of Jewish origins), the glossa ordinaria (arguably the standard commentary on the scriptures in the twelfth and thirteenth centuries) and the evolution of the study of theology (in Masters of the Sacred Page), Lesley Smith now turns to the formidable project of examining medieval exegetes' interpretation of the Decalogue or Ten Commandments. Lesser historians might easily fall into the trap of searching for theological and philosophical constants, a fallacy which Smith bravely resists by situating and analyzing biblical commentary and theological thought within their political, social and religious contexts. These contexts included the rapid changes which the twelfth and thirteenth centuries brought to Latin Christendom, including urbanization, commercialization, and increasing contact and conflict with other faiths and heresies (including Judaism, heresy and Islam).

These seismic cultural shifts were echoed in tremors felt within the academic context and also influenced lay spirituality. The study of the Bible moved from the monastic environment to that of the cathedral schools, with a concomitant shift from meditation on the scriptures within a contemplative context to scholars who were largely secular clerics vying for students (the latter studying either to equip themselves for the pastoral ministry or advancement by attaining a secular or religious office, or both). Biblical exegesis in the form of written commentaries and public reading and glossing of the scriptures (lectio) went hand-in-hand with the development of theological disputations based on material which fell outside the parameters of traditional lectio and which gave rise to collections of sententiae (opinions and authorities) organized by topic. By the early thirteenth century, students were required to write commentaries on the most famous of these collections, Peter Lombard's Sentences, which led to the genre of the theological summa. The combination of gloss / commentary and disputation and the genres they generated "set an inescapable pattern for high-level teaching and research" (178). It is within this tradition that treatments of the Decalogue must be situated and contextualized.

As Smith so evocatively illustrates, medieval exegetes were committed to discovering divine truth as already embedded in creation, the revealed word of the scripture and authoritative commentaries on it (including patristic authors such as Augustine as sanctioned by tradition and church councils). Authors and their audiences were convinced that the meanings of numbers and of words were key to this process; they were testimony to an underlying order in creation (thereby leading to knowledge of the Creator). In so doing, they combined a long-standing Platonic search for ideal truth and unity with the thirteenth-century's Aristotelian love of categorization and subdivision, a tension embodied in the very genres within which theologians operated (summae and confessors' manuals were united in their love of comprehensiveness yet also devoted to organization through number and category). Medieval theologians' division of the Ten Commandments into the first three concerned with God and the second seven to do with one's neighbors reflected, in Smith's words, their almost modern belief in the "mathematical elegance of a universe which runs according to reproducible rules and constants" (73).

All of this may seem to fall into traditional approaches to medieval philosophy and theology, but one of the most valuable contributions made in this book (besides removing the domineering presence of Thomas Aquinas) is Smith's call to resituate intellectual and religious developments within their social and political contexts. Simply put: theologians did not operate in a vacuum. Despite the constraints of authority, of a particular genre, and of a penchant for intellectual archeology, there was room for considerable variation determined by the personality of the individual writer, the context within which he wrote (for example, Simon of Hinton's knowledge of the Jewish community in Oxford), and a wide variety of genres (theological summae, biblical commentaries, pastoral and confessors' manuals, catechetical or homiletic works, vernacular plays). Instead of focusing on the aberrant and eccentric manifestations of spirituality which lure so many historians of religion, Smith insists that in order to understand the exceptional, we must first ascertain the norm, "what the vast majority of Christians knew and assumed" (6, 175). Yet as she herself acknowledges, the conclusions of even mainstream theologians were determined in part by the audiences they were addressing (e.g. an academic disputation versus a sermon intended for the laity) and by their reaction to and interplay with other traditions outside the fold, including Judaism and heresy.

For example, Christian theologians' refusal to reject outright Mosaic law and the Decalogue stemmed partly from a desire to counteract heretical challengers who rejected the entire Old Testament in favor of the New. While sometimes relying on Jewish exegetes such as Maimonides and Rashi for explanations of the literal meaning of the Old Testament, Christian exegetes sought to contrast their religion with Judaism by highlighting the difference between the Judaic law of the Old Testament and the dispensation of the New Testament. They were forced to explain why Christianity retained and observed the Ten Commandments while jettisoning the rest of the laws in the Torah, and why Christians interpreted the Decalogue differently from Jewish exegetes. That they did so by invoking the Pauline distinction between the letter and spirit of the law shaped Christian scholars' consideration of all Ten Commandments. For example, the orthodox Christian position regarding the veneration of religious images was defined and stated in a certain way to distinguish Christian dogma from the Jewish tradition of no religious images and the donatist and iconoclastic bent of many contemporary heresies. The same held true for their consideration of the issues posed by oath-taking, which bowed to the needs of a society bound together by the oral oaths essential for legal, administrative, spiritual and communal cohesion while resisting heretical demands that "thou shalt not take the name of the Lord thy God in vain" meant no oath-taking at all.

Theologians also responded to lay demands for increasing involvement in the church, manifested in the Fourth Lateran Council's decrees on annual confession and communion and on the education of pastors. Smith follows other scholars in seeing this demand, combined with the propitious advent of the mendicant orders intent on purveying the fruits of academic labors within a pastoral context, as shaping the very period of theological work which is the focus of her study: thirteenth-century authors from Paris and England. For example, numbers served not only as a Platonic means of revelation regarding the divine, but also as organizing principle for memory critical to translating academic considerations of particular commandments into a form which the laity could comprehend and remember. "Numerical clusters" became essential for catechesis.

Ministry to the laity and the reconciliation of written authorities to the needs of contemporary society also required a certain psychological dexterity. Many theologians and pastors used motivation, intent, and mitigating factors to find flexible solutions to the tension between the literal and spiritual interpretation of the commandments. "Honor thy father and thy mother" became a mandate for the provision of a material safety net for the elderly otherwise unavailable in medieval society. Similar solutions were found to the potentially vexed interpretation of commands against adultery (what does infidelity mean in a physical and spiritual sense?) and theft (in the consideration of the legitimacy of interest-taking and looting during war). As Smith demonstrates, many of these solutions were enabled partly by how one defined the concepts of "family" and "neighbor" to whom the final seven commandments were held to apply. There were tensions too, between "hand and mind", deed and thought, as theologians and pastors attempted to inculcate a mental habit of self-examination in themselves and in their lay audiences. This spiritual introspection proved essential to the complexities of the confessional, where motives and desires defined not only the severity of a sin, but whether certain actions were sins at all. This proved particularly true in the case of the prohibition of false witness, a command which proved fixating to inhabitants of a society bounded by the notion of one's word (honor and oath-taking come immediately to mind) and the concept of Christ as the Word of God (embodied in the scriptures).

Another of Smith's fundamental contributions lies in her insistence, rightly, that scholars need to reintegrate historical and literary analysis of texts into their treatments of medieval theology and philosophy, to track the change of ideas and genres over time as authors were shaped by and responded to social changes. In so doing, she is part of a new historical school which is reassessing the very nature of the relationships between church and society, pastor and flock in the Middle Ages. Rather than succumb to the picture of the medieval university as "institution of stultifying conformity", Smith points to the polyphony of voices even among establishment scholars active in Paris as reflecting the changes of twelfth and thirteenth century society. The chorus shifted from monastic to secular schools, and finally as the universities became invaded by and gradually dominated by members of the mendicant orders, to the adaptation of academic treatments of the commandments in commentaries and summae to catechesis of the laity through preaching and confession. The individual players in the orchestra vie amongst themselves and seek to drown out the discordance of worlds defined as exterior and competing (heresy, Judaism). Meanwhile, the demands and tastes of their lay audience nonetheless partly determine what the intellectual orchestra plays, even as the orchestra seeks to influence and sway its listeners.