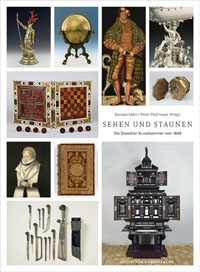 The present volume reconstructs and documents the Dresden Kunstkammer in its Baroque incarnation of 1640. Main editor Barbara Marx's two introductory essays are followed by the publication of the 1640 inventory and respective catalogue. The painstaking preparation took so long that the project was meanwhile overtaken by another, similar publication, i.e. Dirk Syndram's and Martina Minning's ambitious Die kurfürstlich-sächsische Kunstkammer in Dresden. Geschichte einer Sammlung (Dresden: Michael Sandstein Verlag 2012), which also includes the 1640 inventory. As it happens, the two works complement (rather than compete with) one another to the delight and benefit of scholars interested in the history of collecting in early modern Europe.

The Dresden Kunstkammer, founded in c.1560 by Elector August I of Saxony (ruled 1553-1586), turned out to be of astonishing longevity. Seven surviving inventories which span the period of 1587 to 1741 attest to its range, focus and the richness of the exhibits. The 1640 inventory, drawn up before the end of the Thirty Years War, lists over 3,000 objects and thus bears witness to a development which had made the Dresden collection one of the main exponents of its kind under Johann Georg I (ruled 1611-1656). Kunstkammern (also called wardrobe or guardaroba) existed at princely courts across Europe from the fifteenth century, if not before, and consisted of diverse room types, such as the study, the gallery, or the armoury, set up most often in connection with the princely residence. Not all of these architectural showcases were fashionable contemporaneously but it seems as if the small study room was losing much of its appeal by 1560 when many of the most important kunstkammern (Dresden, Munich, Vienna) were being founded. Eventually, the rüstkammern (armouries) which had long been the prerogative of princes were going to follow suit as part of a development which gradually prized figurative and fine art more highly than decorative arts or objects of curiosity. Therefore, kunst or fine art was going to push other categories of collectibles out of the kunstkammer into other forms of display, and in due course specialised museums, by the eighteenth century.

During the sixteenth to seventeenth century, however, collections were still largely private and offered a rich variety of diverse categories to an audience which consisted for the most part of aristocratic guest and fellow enthusiasts. United by peer pressure and societal requirements, the owners collected arms and weapons as well as horses, plants, gems and antiquities and presented themselves as able craftsmen in their laboratories and workshops (26-8). As shown by Marx and her team, in Dresden collecting history started with the treasures amassed and displayed in the armoury (11-5). A prince was supposed to excel in arms and letters, the latter of which included knowledge in geography, botany, zoology, astronomy, economy and pharmacy among others (28-58) as far as it served the well-being of his dominion. Accordingly, a princely collection included objects related to these arts (15-25) but not necessarily to art in the limited sense of fine and figurative arts. Examples of portraits, sculptures, coins and medals were nonetheless displayed, albeit not in high numbers, in what Marx calls the kunstkammer before the Dresden Kunstkammer proper ("Die Kunstkammer vor der Kunstkammer", 11-58).

As has often been noted, the succession of Christian I to the electoral dignity seems to have heralded a different approach to collecting and to what constitutes a kunstkammer (59-116). Experts such as Giovanni Maria Nosseni and Gabriel Kaltemarckt have frequently been cited as implementing Italian, and in particular Florentine, influences at the Dresden court of Christian whose Calvinist sympathies set him apart in the Empire and who by necessity was seeking allies far and near. Political as well as collecting and commercial interests connected him to the house of Savoy and to the Medici in Florence. Diplomatic gifts of works of art started to arrive and further examples were purchased to the extent that it is perhaps possible to observe a development towards an Italian style of art gallery in the Dresden Kunstkammer (59-66). Advisers such as Kaltemarckt may have pleaded for the removal of tools and instruments used in the mechanical arts as well as the results, for example in the now famous guidelines published by Gutfleisch and Menzhausen in JHC 1 (1989): 3-32, nonetheless such categories of collectibles continued to be exhibited in imitation of imperial collecting practices (66-9). From now on, collections were going to attract increasing numbers of princely and diplomatic visitors. In Dresden as well, the Kunstkammer, the stables and in particular the Reißgemach as the heart of the collections were the main sights and their contents spoke of wealth, taste, learning but also political alliances in the international language (68-9 and 88-9) of princely diplomacy. Nature tamed by art as well as art which imitated nature were brought indoors and displayed in such a fashion that encyclopaedic knowledge and didactic memory culture (112-6) based on systematic order and the most appropriate exhibition on shelves conveyed multiple strata of information on behalf of the princely owner who thus became the master of all disciplines.

Embedded in this context is the careful transcription of the 1640 inventory (179-375). The listed objects are numbered, while the serial numbers of those identified in today's collections are rendered in bold. Marginalia can be found in the footnotes and rooms are referred to in plans (Fig. 25 and 26). As striking as the high number of objects (3,126) is the frequency with which exhibits can be identified and, therefore, be illustrated among the figures and plates at the distance of almost four centuries and despite the massive destruction wrought by major wars in between. Serial numbers connect the inventory entries, the illustrations as well as the catalogue (Dokumentation, 385-696) in the most organic and useful way, attesting to the wide-ranging interests and far-flung connections of the Wettin rulers. Those of us who use historical inventories both in their archival and published form, wish for this kind of thoroughness and organisation.

It seems almost churlish to come up with any criticism - nonetheless, it must be done, since this is a failing all too common. Rich and detailed information, rich contextual elements and rich illustrations such as those provided in Sehen und Staunen (and many other recent publications of its kind) simply cry out for a presentation in digital form that is searchable and therefore user-friendly. When this particular project was started, electronic format may still have been a new concept in the humanities with all sorts of technical problems difficult to master by a group of scholars. These days, however, with the rise of digital humanities a major consideration of (art) history departments around the world, it seems a pity that the team around Prof. Marx did not allow the mixture of art and natural science as presented in their findings to prompt their use of the most up-to-date media for dissemination.