Karl-Heinz Gersmann / Oliver Grimm (eds.): Raptor and human - falconry and bird symbolism throughout the millennia on a global scale. Publication in considerable extension of the workshop at the Centre of Baltic and Scandinavian Archaeology (ZBSA) in Schleswig, Neumünster: Wachholtz Verlag 2018 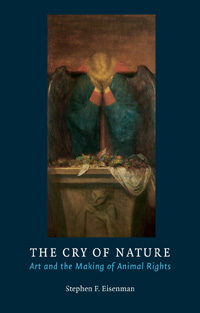 Art historical texts, and especially single-authored volumes, should be judged in great measure by how well they fulfill their expressed ambitions. By this rule The Cry of Nature. Art and the Making of Animal Rights, whose central objective is to provide an intellectual and informational resource for readers interested in the intersection of the animal studies and the making of art, and a platform for scholars to reflect on provocative subjects suggested by the twining of these two themes, must be deemed a success.

Each of its chapters contributes to author Stephen F. Eisenman's goal of addressing and evaluating important issues pertaining to the contemporary discussion of animal rights and the movement's connection to art and ideas originating in the 18th century as well as, to some extent, before. Organized into five chapters and a strong introduction and conclusion, plus a recommended reading list of some of the foundational volumes of the relatively new discipline of animal studies, the book surveys not only images but historicizing texts and makes a strong claim that something like an animal rights movement has existed since antiquity, springing into cohesion in the 1700s, with artists making and using images as persuasion and propaganda.

The pleasure derived from reading this book lies partially in the richness of Eisenman's detailed, personal, and confident descriptions of the lives and emotions of real animals, making his prose eminently accessible. Readers will be compelled by the forcefulness of local histories about, for example, a majestic African elephant photographed in a moment of perfect stillness at a watering hole in 2007 who is killed by poachers in 2009, and delighted by anecdotes about Echo, the author's dog, who learns to stage pratfalls and tumbles in order to make Eisenman laugh. These stories are integrated meticulously within more formal discussions of images - some well-studied, including Rosa Bonheur's The Horse Fair (1853) and Jean-Baptiste Oudry's A Hare and a Leg of Lamb (1742), some less famous - such as Clifford Possum Tjapaltjarri's 1975 painting Eagle Dreaming - which are produced about, and in mindfulness of, the animal.

The book begins with a background chapter defining "What is an Animal?" in terms of societal mores and biological evidence about the commonalities and differences amid living creatures, centering on the ability of animals to communicate, to experience emotions, and to feel pain. This chapter includes pleasantly unexpected exemplars, such as Simon Tookoome's 1979 linocut I Am Always Thinking of Animals, as it stakes out the moral and practical discussions around how we define language and consciousness.

The chapters "Animals into Meat" and "Counter Revolution" dwell on images of the corpses of animals, shown as food, prey, and sacrificial stand-in for the human figure and body. While the recurring motif of the flayed ox in paintings by Gustave Caillebotte and Rembrandt may arouse as much distancing disgust as identification, Eisenman's delicate examination of Jean-Baptiste-Siméon Chardin's The Ray (1728) makes persuasive on the page that these artists intended to convey their beliefs in the existence of the souls and consciousness of animals, and commensurately, the dismal mortality of humans, on their canvases.

"Counter Revolution" weaves together the dual histories of Charles Darwin and the founding of the abattoir cultures of Chicago and Paris - this latter an emerging area of research that calls for and has begun to receive fuller treatment [1], revealing that just as we were learning about how animals were not so different in biological development from humans we concealed and relocated the sights and sites of their commoditization, suffering, and deaths. Thus the plucked hen of William Harnett's 1885 painting For Sunday's Dinner hangs in telling abjectness, while Edwin Landseer's Victorian dogs overcompensate in their role as glazed companions.

Like any other book, The Cry of Nature leaves the reader with some concerns. In particular, the chapter the book takes its title from lavishes much praise on the 18th century horse genre paintings of Englishman George Stubbs, misreporting the truly horrific way in which Stubbs procured his models. [2] Stubbs suspended live horses from a harness while slowly, over a period of days, draining their blood and injecting and filling their collapsing veins with wax (in fact Maurizio Cattelan's current project of horse-taxidermy-as-sculpture comments directly on this practice). Knowing this it is difficult to see past the content of Stubbs's work as posed trophies of equine serial killing.

This misstep seems an oversight, though, as the author's consideration certainly lies, for the most part, with the intentions of image-makers, as the redeeming examination of the graphic work of activist and artist Sue Coe shows. The chapter "Primal Scenes" in fact delves into the very issue of artist psyches and motivation with comparative studies of the Freudian oeuvres of Francis Bacon and Joseph Beuys, backlit by George Orwell's talkative animal characters. Here too Stephen F. Eisenman's interesting asides about reading "actions" by Allen Sekula and Carolee Schneeman in the 1960s and 1970s as part of a continuing movement is insightful and nuanced, distinguishing between the various schools of animal rights thinking on ecology, conservation, pets, and diet.

The Cry of Nature is a significant accomplishment, reworking the classic subject study to ask the new question of how the art has served and can serve to change our conception of ourselves, animals, and the world we share with them. Eisenman's prose transcends stylized accounts of animal rights activism as privilege and presents it instead a necessary next step in the growth of a civilized, and cultured, humanity.

[1] Paula Young Lee: Meat, Modernity, and the Rise of the Slaughterhouse, Durham, N.H. 2008. Paula Young Lee has investigated the important confluences of meat and modernity in this book and in her newer volume: Deer Hunting in Paris: A Memoir of God, Guns, and Game Meat (2013).

[2] Simon Schama: "Books - at the Museums - George Stubbs at the Frick." The New Yorker, (2007): 90. Simon Schama has written extensively here and elsewhere about Stubbs's methods of killing, preserving, and posing dead horses.