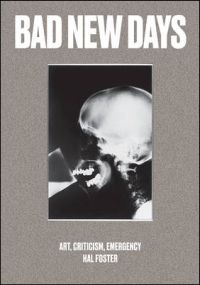 The artistic genre that has come to be known as institutional critique - beginning with Hans Haacke's Shapolsky et al. Manhattan Real Estate Holdings, a Real-Time Social System, as of May 1, 1971 to the identity-driven commentaries of Daniel Martinez and Adrian Piper in the 1990s - differed from both the historical avant-garde and the neo-avant-gardes of the late 1950s and early 1960s in their approach to the width of the swath of scorched earth between the artist and the institution. The artists whose practices are scrutinized by Hal Foster in Bad New Days: Art, Criticism, Emergency [1] move instead from the concession that there is no "elsewhere", no realm outside art, beyond recuperation.

Thus a reassessment of the terms of engagement is chief amid Hal Foster's concerns.

The book is presented in five chapters denoted by words Hal Foster proposes as new models for the interpretation of art in the age of globalization and terrorism: Abject, Archival, Mimetic, Precarious, and Post-Critical. Prefaced with an introduction laying groundwork for this shift in approach, a coda, "In Praise of Criticality", and a generous 40-page notes section, Bad New Days, at 196 pages total, has a remarkably tight construction and clarity of purpose and prose.

Yet while triumphant in some respects, Bad New Days is by no means the procedural sequel to The Return of the Real: The Avant-Garde at the End of the Century, the 1996 incantation for reanimating the disruptive mission of art's radical pioneers. Hal Foster admits that the vocabulary of the postmodernism of the 1990s he helped create in Return of the Real and as an editor of October is no longer adequate for the task of evaluating the work of artists who today can be considered a wary vanguard. Means of analysis beyond the psychoanalytic and Marxist are required to address the cryptic oeuvres of Isa Genzken and Joachim Koester whose work "moves away from privileging of the imagistic and the textual." (7)

Therefore it is a bit of a letdown after Foster's call to lexical action that the first chapter, "Abject", falls back on the theoretical frameworks of Jacques Lacan and Julia Kristeva in using Cindy Sherman's ostensibly gaze-neutralizing photographic series to make abjection "test the limits of sublimation" (35), through an exploration of body horror, deformity, and taboo.

The essay, originally published in 1996 in October as "Obscene, Abject, Traumatic" as well in Return of the Real the same year, is out of phase with the other chapters. Viewed in the hindsight of two decades, Sherman's work, which today continues to mine the same vein, is too hermetic to have a proper dialogue with the artists discussed elsewhere in the book. Andres Serrano's ethically questionable "The Morgue" photographs and Mike Kelley's pathetic stuffed toy animals could have been better deployed to interrogate their latter-day counterparts, Sally Mann and Annette Messager, in an updated stock-taking of what if any place abjection holds in current studio practices.

The remainder of the essays in Bad New Days are of the post-September 11 era.

The second chapter, "Archival", (a version of which was also previously published in October, in 2004, as "An Archival Impulse"), considers the "artistic practice as an idiosyncratic probing into a particular figure, object, or event in modern art, philosophy, or history." (43) Here "sources [...] familiar enough to ensure a legibility that can then be disturbed or redirected" (44), such as Tacita Dean's video-and-narrative musing on the associations prompted by the tale of Jean Jeinnie, Girl Stowaway (1994) and Joachim Koester's 2005 16mm film loop Message from Andrée, consisting of found footage of an ill-fated attempt to circumnavigate the North Pole via hot air balloon that recovers the explorers' somehow sympathetic combination of hubris and curiosity, take up the role of archivist, enacting a détournement on behalf of lost or marginal historical events and figures as a "gesture of alternative knowledge or counter memory." (44)

It is from this point in "Archival" that Hal Foster connects the elegant premise of "deferred action" from The Return of the Real with the contemporary urge "to turn belatedness into becomingness, to recoup failed visions in art, literature, philosophy, and life into possible scenarios for alternative kinds of social relations, to transform the no place of an archive into the new place of a utopia." (53)

More connectivity to the present would have further elevated this ambition. Pierre Huyghe's 2001 One Million Kingdoms, art drawn from video game glitches vis à vis Cory Arcangel's Super Mario Clouds (2002) has however already lost its relevance. The inclusion of more urgently "archival" celebrated work such as The Clock (2010) by Christian Marclay would have given this chapter a smart update, as it embodies exactly Foster's "paranoia [as] a practice of forced connections" (61): it generates suspense, though enjoyable in real-time consumption, it also causes frustration, since it is difficult to consume the entire 24 hours uninterruptedly.

Foster gets back on track with a thoughtful analysis of Thomas Hirschhorn's sculptures, altars, kiosks, and monuments. These passages steer clear of jargon and draw on a keen imaginative penetration of Hirschhorn's project to describe, for example, 1999's Direct Sculpture, a lopsided mixed-media obelisk inspired by the ad hoc memorials in Paris erected near the site of Princess Diana's 1997 fatal car wreck.

Hirschhorn occupies key positions in the "Archival" chapter and the one that follows, "Precarious". Indeed a secondary narrative that emerges is Hal Foster's positioning of himself in relation to Hirschhorn in a role similar to the one occupied by Benjamin Buchloh to Gerhard Richter: as interlocutor, evaluator, and cultural biographer.

In "Precarious" Foster describes how Hirschhorn extends the project of public memorialization in a series of ephemeral monuments to philosophers he admires (such as the one dedicated in 2013 to Antonio Gramsci in a public housing project in the Bronx). Acknowledging that these fragile reliquaries may agitate as likely as soothe those who encounter them, Hal Foster argues that in moving the construal of the precariat from one of victimhood to social movement, Hirschhorn emphasizes the difference between coffee-shop bohemians and undocumented migrant laborers.

The "Mimetic" chapter connects with the Emergency of the book's subtitle, in the sense that post-9/11 artistic imitations of life stand to comment most fully on its imperilment. Here it is Isa Genzken who delights as both the éminence grise and prognosticator of a cheeky capitalist doom. Genzken's 1980s and 1990s examinations of disintegration of the self (her 1991 photograph "X-Ray" decorates the book's cover) become, by 2003's Da Vinci, a neo-Dada "mimetic exacerbation" (100) in the form of vaporized bodies splashed across jet window panes.

The latter third of the book presents Hal Foster's reclamation of the value of art criticism as a literary form and public obligation: Whether in praise or derision, trenchant criticism serves the purpose of introducing the public to contemporary art and opens up a place of dialogue to assess conceptual underpinnings and move the dialogue beyond aesthetic appearance and pleasure.

This is a serious and good point since by and large the public tends to avoid contemporary art altogether, as it calls for more patience than many viewers are willing to give. An audience is needed to begin a dialogue - and thus, in light of Hal Foster's call for renewal through "post-criticality", what looks like a problem may actually be an asset.

Finally, the book is profusely illustrated, ofttimes from the personal collections of those profiled. This speaks to the author's unparalleled access to the artists and encyclopedic knowledge of their lives and environments. Bad New Days marks Hal Foster's own "return" to the contents of the museum rather than its architectural space, and helps perioditize the art of the post-war period that falls within the large rubric of the contemporary.