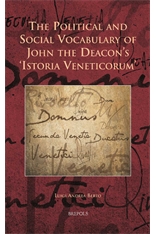 The book under review is the translation of the 2001 Italian monograph on the Latin history of John the Deacon, written in Venice at the beginning of the eleventh century. Luigi Andrea Berto is well-known for his expertise on this topic: he is the editor of the nowadays standard edition of the Istoria Veneticorum, issued in 1999 and replacing the 1890 edition of Giovanni Monticolo. Monographic works on John's book are rare and Berto has the great merit to bring this topic to the English-reading audience.

The introduction (vii-xv) breaks down the purposes of the research, collects the biographical data on John the Deacon and describes his history. The aim of the monograph is twofold. On one side Berto wants to collect the vocabulary deployed by a medieval author in order to describe societies and polities, as Germana Gandino, among others, did before him. [1] On the other hand, the intention of the author is to understand if the first part of the narrative, covering the years from the Lombard conquest of Italy of 568 up to the election of duke Maurice in 764, is consistent with the subsequent narrative ending with the death of Peter II Orseolo in 1009. The long section is in fact not recorded in the oldest manuscript preserving the Istoria Veneticorum (the eleventh century Codex Vaticanus Urbinatis 440, named "U" by the author). The following chapters investigate single narrative tropes in order to understand how John expressed them in Latin. The first chapter (1-81) deals with lay power. Berto focuses on the vocabulary deployed in order to describe the ducal authority, the one used to narrate kings and emperors as well as the vocabulary used to describe the relationships between the dukes and the empire. The second chapter (83-95) deals with class vocabulary: elites, milites and cives (categories that should perhaps have been included in the passages about the elites) and the lower strata are investigated. Chapter three (97-116) covers the 'verbs of power', collecting expressions used to narrate the rise to the dukedom of single dukes and their exercise of it. Chapter four (117-139) concentrates on the terminology used for describing kinship and the age of man. Chapter five (141-206) describes the vocabulary of space. Berto chooses to handle the terminology used to represent the Venetian lagoons, the naming of further territories like i.e. Saxonia, Francia or Sclavenia, the definitions for urban space, and the ones used for other forms of settlement like castrum or civitas. Chapter six (207-242), covering the terminology deployed in order to describe peoples, is the most interesting of the book. The chapter opens with a long analysis of all the Venetians' occurrences. Berto debates the composition of John's populus, often mentioned as a political actor in the Venetian life, before describing the other peoples featuring the Istoria Veneticorum. Some interpretations, like the origin of the name Romani for some Dalmatian groups (226), may be questionable and could have profited of recent literature. While debating the role of the Narentans (a population named after the mouths of the Neretva river), some affirmations are overstated (227: Sclavi and Narentans were two entirely different matters). Yet, the chapter is highly useful, providing the reader with a summary of all the ethnonyms and other definitions to be found in the Istoria Veneticorum. Berto briefly concludes (243-244) that the given evidence reinforces the idea of a single authorship for the section of the history contained in "U". At the same time he maintains the first part of the narrative (until the year 764) to be a later addition. This idea contrasts the classic opinion of Monticolo. [2]

Since the book is a translation of the 2001 original, the text could have benefited from bibliographical updates or a revised introduction in order to consider the issues raised by the historiography of the last decade. A work like Barbara Rosenwein's "Emotional Communities in the Early Middle Ages" may have sharpened the understanding of the social role of John's vocabulary. [3] In the analysis, while the authorship is paramount, the audience, together with the discourse alive in eleventh century Venice, is rather absent. Berto's straight equations between John's personal experiences and his knowledge of contemporary events will find some disagreement. Finally, anthroponomy is not coherently conveyed. Latin personal names are written in Croatian, English, German, and Italian forms. This troubles the index-research.

Yet, the author is successful in examining the recurrences in the vocabulary of John the Deacon in order to investigate authorship. From time to time the arguments may appear somehow lengthy to the reader, but the richness in detail is the great strength of Berto's work. Moreover the author is able to confront John's narrative with a wide-range of Latin texts, both from Italy and Europe, as well as from Venice, offering numerous suggestions to the reader. The book is a valuable working-tool for each scholar approaching John the Deacon and his multi-colored vocabulary.