Anders Winroth: The Age of the Vikings 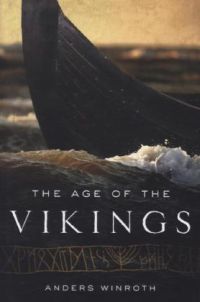 Anders Winroth is, among his many interests, an expert of the Scandinavian World in the Middle Ages, and the author of the successful The Conversion of Scandinavia, published in 2012. With his last effort, Professor Winroth brings the reader once more beyond the northern waves, with an already highly praised book full of illustrations covering the Nordic high Middle Ages. Now that many are suggesting that the fall of the Roman Empire never happened, the Vikings are perhaps one of the few things still keeping the Middle Ages floating among the broader audience, but looking at the item, the reviewer faces the inescapable question: do we need another book on them?

The introduction (1-13) opens with the description of a banquet taking place in the great halls of a Norse chieftain. In a lively narrative, we appreciate the generosity of the leader; we taste the southern drinks reserved for the best of his warriors; and we hear the bragging of the rookies who have not been yet in Viking rides down to Frankland; finally, we enjoy the poetry of a skald who just came from Iceland. If the opening, due to his fresh and almost novel-like style, may at first puzzle the reader, we soon understand the idea behind it. We are in the hearth of winter in the great halls of the Scandinavian chieftains; it is there that Beowulf and his companions commenced their adventure, it is there that every Viking raid began. It is from the very same place that Winroth wanted to begin his narrative. In the following chapter (15-44), dealing with the violence of Vikings' raids, the author tries to penetrate the distorting picture of the literary evidence that paints unspeakable slaughters by the hands of Norsemen. The author argues it to be a literary construct to a great extent, comparing the Norse reality with the neighbouring ones and deconstructing myths such as the berserkers or the notorious "blood eagle." Winroth finds the key for the Vikings' success, who were less equipped and skilled than their Frankish antagonists, in the careful selections of their objectives and the suddenness of their attacks, rather than in their alleged violence. In the following chapter (45-70) the adventures of three men called Rörik are the point of entry to the great Norse expansion towards South, East and West, with the narrative of the Norse settlement in Greenland being particularly striking (60-68). Here again the author departs from the myths of Scandinavian expansion finding a "pull" factor in the overpopulation described by ancient and medieval authors: he suggests that it were the aristocratic ambitions to promote the Vikings´ enterprises. A discussion on ships (71-97) follows: Winroth describes their structural characteristics; their techniques of construction; their role in communication and warfare, but also in the self-representation of the aristocracies together with the vessels´ role in a shared imagination. Here Winroth comments on the belief that ships carried the dead in the afterlife, together with the aristocratic custom of ship-burials and the always fascinating (and a little bit disturbing) account of Ahmad ibn Fadlan of the Rus funeral on the Volga. Chapter five (99-130) deals with economy and exchange in the first place. While leafing through these pages the reader will find some of the most suggesting evidence such as the silver hoards; the archaeology of the great timber emporia of the North Sea and the Baltic; and witnesses on fur-trade. Moreover the accounts of Ohthere's and Wulfstan's voyages, which will carry the reader to the vast "land of Darkness" in the East and down to the Golden City of Constantinople. Chapter six (131-56) focuses on state-building, describing the history of Denmark, Sweden and Norway up to the eleventh century. Central aspects are generosity and reciprocity, the values and praxis that tied the men together. Through gift-giving and armed loyalties, lords grew in richness but declined in number, so that the social order built around the glorious chief's halls faded away, leaving room to the rise of the bland states, which brought the end of the Viking Age. Chapter seven deals with the working of Viking Age farms (157-80). Together with aspects of agrarian economy, Winroth debates alimentation, the way of clothing, and the structure of households. The religions of the north come next (181-211). Here the crossing between paganism and Christianity is paramount: the author describes the typology of sources we have to rely on, together with their difficulty, the nature of the pre-Christian belief and the role of conversion. Literacy and visual arts are the topics of chapter number nine (213-40). Here Winroth exposes the nature and evolution of rune carving, with the brief analysis of the Karlevi Stone being a skilful exposition of the historian´s work on his sources (222-24). A treatment of skaldic literature follows, and the author describes authorship; commissioning; the nature of the audience, together with some topic characteristics of the narratives, such as the clear gender roles. The Oseberg tapestry, a long narrow strip depicting a procession of two rows of horses is the thin and elegant departing point for a discussion of visual arts which ends the chapter. The epilogue (241-47) covers the end of the Viking Age, the decades when the social, cultural, economic and political aspects that granted the uniqueness of the Norse world crumbled, making Scandinavia "a normal European region that is similar to the rest of the continent, although colder and poorer" (246). Here the image of the Harald Hardruler, the hero of Sicily, Constantinople and the northern battlefields, falling at Stamford Bridge in 1066 fighting the English, becomes the metaphor for an époque coming to a close. An updated bibliographical essay concludes the book.

At the end, the author provides a fresh survey on the Viking Age, focusing on the actual Vikings, who sailed the "oaks" to plunder the southern kingdoms, but also overall the Norse world. For every section dealing with economic, social, cultural and political history, Winroth chooses some aspects that are particularly informative or appealing to his audience. Seldom will the information contained in the book be unknown to the reader acquainted with the Vikings and their culture, but never will the narrative be disappointing because Winroth is able to tell old stories with sparkle. Moreover, he singles out and discusses the major historical myths that burden the subject, telling a story delivered for its many fallacies, deconstructing without destroying the fascination of history, so that many readers will wish that The Age of the Vikings was the first book that they had read on the topic. Returning to the opening question, I am glad to say that Winroth's book is a very welcome addition to the history of the Viking world.