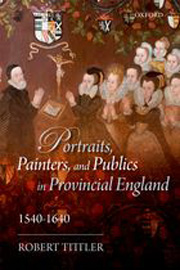 For most people the term "Renaissance Portraiture" will conjure paintings of richly dressed Italian princes before their minds' eyes. Monographs and exhibitions have made us think immediately of portraits of the rich, powerful and famous representatives of an increasingly courtly society in Southern Europe. As far as the executing painters of these works of art are concerned, most were either from that same geographical environment or received their training in Florence, Rome or Venice. Indeed, we still speak of the Italian Renaissance, or even more narrowly of the Florentine Renaissance, as if there were classifications of quality to which other geographical and political entities could not aspire. In recent decades though, there are attempts to redefine the "Renaissance" and to free ourselves from the sixteenth-century definitions of Giorgio Vasari as well as from the nineteenth-century labelling still influencing much of our thinking about the period. Indeed, many historians these days prefer to use "Early Modern".

Archival research of inventories, salary lists and diplomatic correspondence has begun to show that the courts of aristocratic Europe maintained close cultural ties even in times of difficult political circumstances. Artists and works of art travelled from one end of Europe to the other, reports about new trends and discoveries were sent by post, sometimes within days of their having taken place. The English realm under its Tudor kings and queens was by no means isolated from the Continent even though the focus of its foreign politics was already directed towards the new worlds across the Atlantic and the building of a colonial empire. Of the many new dynasties ruling over sixteenth-century Europe, the Tudors may have felt the lack of royal mandate most acutely; hence Henry VII's insistence to destroy copies of the Titulus Regius document, detailing Richard III's claim to the throne of England, together with as many of the members of the House of York as possible; Henry's creation of the title of Duke of York for his second son; the English Reformation as prompted, at least in part, by the marital problems and lack of legitimate male issue of an increasingly desperate Henry VIII. And, the large number of highly stylised portraits executed by some of the leading European artists, for example Holbein the younger and Marcus Gheeraerts the younger, providing the visual underpinning for the Tudors' dynastic claims (18-20).

Robert Tittler makes it very clear from the onset that he is no art historian but a historian who finds his raw material at the archives, for example a number of Record Offices across England (176-9). It is actually one of the great assets of this book not to present primarily another art-historical study dealing with portraiture. While the first two chapters deal with English portraiture in context and with locating the public respectively, Tittler's focus soon shifts to painters not usually in the lime-light of art-historical research, i.e. provincial painters / stainers working as journeymen (60-86), their resources and vocabulary (87-101 and 125-51) and regional experience (152-172). The nine chapters of the book, therefore, look much less at stylistic development, attributions and questions of connoisseurship. They attempt to provide the necessary background knowledge in heraldry and social distinction (102-24), which once helped to bring such portraits alive and make them readable for the intended audience.

Thus Robert Tittler's study fills a considerable gap in our knowledge about portraiture, portraitists and their audiences at the borders of the civilised world during the sixteenth and early seventeenth century. Actually, these can be seen as borders twice removed for not only does Tudor and Stuart England often only play a marginal role in European considerations of the art of this period, Tittler is also interested in the middle-class sitters for portraits created far from the bright lights of London and the Royal Court. Most of the artists responsible for the portraits cited in Tittler's study, cannot even claim authorship (viii-ix); we do not know their names and little about the circumstances under which they operated, about the models they followed and can only assume that the finished portraits corresponded to current conventions as well as the wishes and aspirations of the sitters.

There can be little doubt after reading this book that there was a lively market for portraiture in England (74-80) which included all ranks of society able to afford such a testimonial of their status, wealth, profession and (perhaps) likeness. Whilst issues of likeness and body theory are now discussed even in relation to some of the most photographically detailed portraits of Italian masters such as Bronzino, early-modern English portraiture seems not to have been concerned too closely with the most natural and life-like rendition of the sitter's individual traits. This characteristic may have had something to do with the abilities, or lack thereof, displayed by provincially trained artists. It seems, however, to have been founded much more in an understanding of the art of portraiture as more akin to the art of heraldry (117-22). This fact also goes some way towards explaining why even in English royal portraits foreign artists trained according to a different set of artistic rules and stylistic preferences displayed a curious tendency towards two-dimensionality and limited use of colours, while much of the portraits' surface is also covered by inscriptions giving the political or societal context of the commission.

The painterly style may have been more al naturale in Europe. Yet, the inclusion of inscriptions and coats of arms in portraits was no uncommon phenomenon on the Continent. What portraits executed on either side of the Channel have in common is the inclusion of certain props that mark the sitter out as a gentleman, freeman or office-holder and hint at the bloodline as well as societal or religious affiliation. While some portraits may always have been painted out of nostalgia for a far-away friend or relative, they were mostly intended to fulfil political ends: ranging from help with marriage negotiations over the transfer of office and power from one person to the next to the establishment and documentation of genealogies. In a sixteenth century which was marked by the rise of numerous new families, invasion and constant as well as long-lasting political and religious conflict, patrons seem to have been particularly interested in the stabilising power and documentary evidence of portraiture. Whether executed crudely or not, these provincial portraits also attest to the growing importance of the middle classes and to their imitation of the aristocracy in terms of dress and education (131-3 and 137-40), to societal changes which made it possible for widows to continue their husbands' workshops (80-3), to artisanal developments which refined production (90-4) and to the stubborn recusancy of Catholic families in real life as well as expressed by their portraiture (135-7).

It is to be hoped that this study will be read by art historians of all stripes and that it will help to spark off discussions between the representatives of different regional variants of the Renaissance. As the book shows, England had its own Renaissance which at first glance may have looked somewhat different from the examples across the water. The preoccupations and aspirations of patrons and artists were, however, highly comparable.