David N. Bell: The Library of the Abbey of La Trappe. A Study of its History from the Twelfth Century to the French Revolution, with an Annotated Edition of the 1752 Catalogue, Turnhout: Brepols 2014 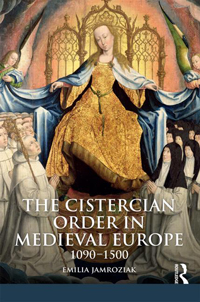 This book was prepared for a series entitled The Medieval World, edited by Julia Smith of the University of Glasgow. According to the Acknowledgements page, Emilia Jamroziak's contribution is the closing volume of the series, which will be discontinued. In character with earlier contributions, this book is intended as an overview, covering more than three centuries of Cistercian history and synthesizing a wide range of scholarship.

The author naturally had to situate her work in relation to similar general histories, especially Louis J. Lekai's 1977 volume The Cistercians: Ideals and Reality. The great originality of Jamroziak's work is in choosing to set aside the standard paradigm used by Lekai and others, which is essentially an evaluative approach, judging the various phases of history in terms of rise, decline, and reform. The author also avoids the reductionist approach of many recent historians, whose dominant focus is on socio-economic realities to the exclusion of the religious dimension for which the monasteries were appreciated in their own time. The result is a well-balanced, multi-faceted, descriptive approach that traces Cistercian life in its first centuries in terms of change and adaptation. The author's methodological choices also make it possible to engage the neglected thirteenth and fourteenth centuries with the same level of interest shown the Order's early days.

The organization of the book is nevertheless somewhat predictable. There are two lengthy opening chapters on the origins and early years, followed by shorter chapters on various aspects of Cistercian life in its first three centuries: relations with the lay world, Cistercian nuns, art, architecture, economy, and intellectual activity. A final chapter on the Order in the later Middle Ages attempts to describe this period in terms of continuity and adaptation, rather than dismiss it as an uninteresting time of inevitable and irreversible decline. The book concludes with a brief general Conclusion.

A strong point throughout this work is that the author draws on an exceptionally wide range of sources in many languages, including case studies and other scholarship from the full range of the Order's expansion, especially in Eastern Europe, thus avoiding an excessive concentration on any one geographical area. The book will therefore widen the horizons of readers who are already well-acquainted with Cistercian history.

Freedom from the golden age / decline paradigm - and from the related notion that the Cistercians' wealth was an accidental by-product of their way of life - allows the author to describe the ups and downs of Cistercian economies with a richness of detail and an objectivity that is lacking in earlier overviews. The section on Trade and Money Markets is particularly enlightening. Again, the breadth of the author's bibliography here is impressive. Chapter 8, "Was There a Crisis of the Cistercian Order", also benefits from the author's even-handed method. The concluding sentence of this chapter is characteristic of the author's approach throughout the book: "Although the lifestyle of Cistercian monks witnessed many changes between the twelfth and fourteenth centuries, from austere communal arrangements to comfortable private cells and a richer diet, and many monks were university graduates, these were not disastrous departures from the original ideal, but a natural reflection of the changes occurring in society as a whole." (274)

Unfortunately the confusing grammar of this sentence is also characteristic of an annoying aspect of this book, namely, a serious lack of editing. In addition to many awkward sentences, there are far too many typographical errors than are admissible in this kind of work, dozens and dozens in fact. The problem begins on page 2, line 30 with a missing an, continues at steady rate with such things as an abbacy with 140 monks (65, l. 9) and a spiritual treaty composed by John of Newnham (129, l. 39), and reaches as far as 289, line 27, where a famous abbot of La Trappe is named Rancéa.

More serious than these editorial slips are the many confusing or mistaken assertions regarding concrete details of Cistercian life in the Middle Ages. It appears that the author's command of the sources is stronger in the economic and political arenas than in the literature and spirituality of the Order. For instance, some direct consultation of early texts like the Ecclesiastica Officia would have prevented puzzling statements regarding the monastic habit (17 and 63), the ordination of monks and abbots (255, l. 2-3, where it is stated that "In the twelfth and even thirteenth centuries very few Cistercian monks, or even abbots, were ordained priests"), and the profession of novices (166, l. 33-34, where it is said that professions took place on the First Sunday of Lent, whereas, it is clear from the E.O. that novices were professed on the anniversary of their entrance, which could be at any time of the year).

The strong points of Emilia Jamroziak's book far outweigh the difficulties just mentioned, but the presence of such shortcomings raises a question. Given the fact that scholarship in matters Cistercian has reached fairly high level of specialization, is it realistic to undertake overviews of this kind without a team approach? The book is an admirable accomplishment in many respects, but it contains enough flaws to make one wonder whether the single-handed synthesis has become as out-of-date as the simplistic paradigms the author so ably dismantles.

No doubt the publisher of the series bears a share of the responsibility for the book's imperfections. The same is perhaps true of an incongruous choice of image for the cover of the book, the greatly overused painting The Virgin Sheltering the Order of Cîteaux by Jean Bellegambe the Elder, which post-dates the period in question by over a century.