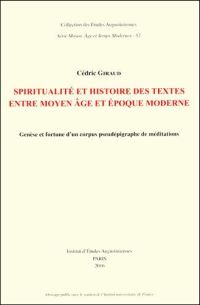 The first part of the title situates the work within the particular discipline of the history of spirituality based on religious texts of an experiential nature. This particular field has its roots in Henri Bremond's Histoire littéraire du sentiment religieux and in the vast tide of studies of spirituality that arose in the first quarter of the twentieth century, epitomized in the grand project that became the Dictionnaire de spiritualité. More specifically, Giraud's book is a kind of continuation and expansion of Dom Wilmart's Auteurs spirituels et textes dévots du Moyen Âge latin.

The second part of the title indicates the particular object of study, namely, a series of meditative works whose spectacular success stretched from the Middle Ages into the nineteenth century. Over time these pseudepigraphical works of diverse origins gravitated toward each other and formed a kind of classical corpus on a particular kind of meditation. The works in question are the Ps-Augustinian Soliloquia and Manuale and the Ps-Bernardine Meditationes, to which were later joined in the sixteenth and seventeenth century works of an anonymous fourteenth-century author known as the Idiota (later identified as Raymond Jordan). It is worth noting that chapter 4 on the rediscovery of Raymond Jordan during the Renaissance is the fullest account to date of this significant episode in the history of spirituality.

The importance of these "textual miracles," as Giraud calls them, is not so much just in the impressive numbers of medieval copies (over 600 for the Meditationes, over 500 for the Soliloquia, and over 450 for the Manuale) as in their enduring popularity over so many centuries. It is a unique opportunity to be able to observe how an unchanging corpus of works negotiates the many twists and turns of the historical development of a particular kind of spirituality.

Although Giraud's general approach has its roots in the kind of literary histories of spirituality mentioned above, he not only studies the origin, significance, and influence of these texts, but also pays close attention to the history of their reception. He thus traces the material aspect of the transmission of these texts from their beginnings in a manuscript culture, through their transition to early printing, into various major publishing programs of modern times. This approach makes it possible to observe the use of this corpus in various religious orders and in their programs of formation, in the clerical milieu, in translation for a wider audience, in the Devotio moderna movement, in the post-Tridentine era, in the context of the patristic revival, and in critical scholarly circles. The fairly abrupt loss of interest in these texts that occurred at the end of the nineteenth century is itself an interesting page in recent church history.

Most interesting for the history of spirituality is the meditative character of these texts. Their anonymous authors, clearly influenced by John of Fécamp and especially by Anselm of Canterbury's meditations, presented traditional patristic material in a way conducive to meditative reading. The introspective and affective climate of these texts encouraged the exercise of a particular kind of introspection in view of greater self-knowledge. This easily accessible style of writing made these texts suited for use in the formation of novices and led to their ever-increasing use by clerics and lay persons. These texts, therefore, had a profound and long-lasting influence on Christian spirituality in the West. It might be said that their success was even further extended by The Imitation of Christ, whose author knew and drew freely on them.

The story of this corpus forces us to see pseudepigraphical writings of this kind in a new light. Anonymity made it possible for the authors to step beyond the bounds of reliance on authoritative tradition and gave them the freedom to speak in an experiential way. At the same time, it was because of their impressive assimilation of patristic thought and style that these authors could write like the Fathers under whose names their works were disseminated. Rather than see these pseudonymous authors as imposters, it is perhaps more accurate to consider them as lesser luminaries who were able to adapt classical patristic works to a new kind of meditative reading and a new kind of audience. The centuries-long success and profound influence of this particular corpus is a salutary warning against facile dismissal of apparently secondary works simply because they do not figure among the authentic titles of recognized authors. Such texts have their own kind of authenticity and their own importance.

The rigor of Cédric Giraud's historical method is exemplary, especially with regard to his careful inventory of manuscripts and printed editions of the works in question. Not only does he provide a detailed history of each text, but also investigates the various combinations of some or all of these works in manuscripts and editions across the centuries. At the same time, Giraud's historical approach is combined with thoughtful consideration of the implications of the textual histories at hand. The work underscores the importance of books in Christian pastoral practice and in the development of spiritual currents over time. In fact, it is his deliberate choice to follow the use of this pseudepigraphical corpus in the long term (la longue durée) that makes this study a significant contribution both to the history of texts and the history of Christian spirituality.