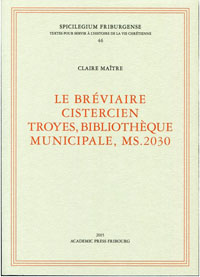 This edition of a Cistercian Breviary (hereafter Troyes 2030), copied in 1247, serves as a companion volume to The Primitive Cistercian Breviary (Berlin Ms. Lat. Oct. 402), edited by Fr. Chrysogonus Waddell and published in the same series (Spicilegium Friburgense 44) in 2007. Whereas the Berlin breviary represents the earliest state of the Cistercian liturgy (first recension or RI), the breviary in Troyes 2030 represents the state of the liturgy (second recension or RII), after Saint Bernard and his team completed their revision in 1147. In other words, by comparing the antiphons, responsories, hymns, and night office readings found in these two editions, it is possible to trace the evolution of the Cistercian liturgy from RI to RII. It is important to keep in mind, however, that neither of these breviaries provides an exhaustive text of their respective recensions. In certain cases, recourse to other manuscripts is necessary to make the comparison. Nonetheless, the availability of these two editions is a major leap forward in the study of the early Cistercian liturgy.

If Chrysogonus Waddell could have chosen an RII breviary to accompany his edition of the Berlin RI text, it would not have been Troyes 2030.[1] One of his choices would have been the two volume manuscript from Morimondo (near Milan), now Bibliothèque nationale de France, NAL 1411 and 1412, and available in a facsimile edition prepared by Claire Maître in 1999.[2] Preferences aside, though, there is a wide range of good material to choose from.

Claire Maître's choice of Troyes 2030 for her edition is related to the still incomplete project of cataloguing the medieval library of Clairvaux.[3] Her task in this vast collaborative undertaking is to describe the forty RII breviaries from Clairvaux that have been preserved. Rather than describe forty times books that have similar contents, she opted to edit one of them as a point of reference for analyzing the others. Aware that a printed edition of this kind would complement The Primitive Cistercian Breviary, she published it in the same collection (Spicilegium Friburgense) with a similar format (5-6).

The advantage of breviaries is that they gather together material that is otherwise dispersed in many volumes. The disadvantage is that they abbreviate and omit texts in order to save space, often counting on the memory of the intended users. Troyes 2030 usually omits the antiphons at Lauds and Vespers. On the other hand it is more complete than the Berlin breviary: towards the beginning of the volume it includes a section with the orations for the Commons and Sanctoral, along with a list of how Commemorations of the Saints are celebrated throughout the year; towards the end of the volume it includes a nearly complete hymnal, a collection of canticles, and the psalter in half-verse style, i.e. giving only the first few words of each verse as a memory aid.

Although Troyes 2030 is an excellent witness of the post-Bernardine-reform Cistercian liturgy, a tradition that remained largely unchanged until the early modern era, it is interesting to note certain liberties in the arrangement of the material. As pointed out in the Introduction, there are some differences between Troyes 2030 and the Exemplar (Dijon 114) that was intended to serve as a model for all liturgical books in the order. The greatest variation is in the night office readings (which, to modern tastes, were broken up into disconcertingly short bits). Where the Exemplar introduces a second reading, Troyes 2030 tends to continue with same reading throughout the office. As Claire Maître points out, this tendency is actually a further application of the principles of the Bernardine reform. (28) Throughout most of their history, the Cistercians have had a common liturgy but not an identical one.

It would be hard to overestimate the importance of this edition of Troyes 2030 as a resource for the study of Cistercian liturgy, all the more so since it complements so well the Waddell edition of the Berlin breviary. At the same time, the usefulness of these books extends beyond liturgical studies. Anyone studying the writings of the major Cistercian authors now has relatively easy access to the texts from the office that often inspired them and that they sometimes refer to explicitly. This edition was clearly prepared with the utmost diligence. Over 150 pages of indices greatly facilitate the task of locating texts.

[1] He would have preferred either the Chigi CV 138 manuscript in the Biblioteca Vaticana, originally from Tre Fontane, or the two volume manuscript from Morimondo (near Milan), now in the Bibliothèque nationale de France, NAL 1411 and 1412; see Chrysogonus Waddell: A Corpus lituturgicum cisterciense saeculi duodecimi. A Tribute to John Sommerfeldt, in: Truth as Gift: Studies in Medieval Cistercian History in Honor of John R. Sommerfeldt (= Cistercian Studies Series, 204), ed. Marsha Dutton et al., Kalamazoo 2004, 191.